100% creation - The hand of Laurent Jannin, upholsterer at the Palace of Versailles

This summer, head to the Palace of Versailles. We put our microphones in the area and its workshops to introduce you to some of these crafts. They are upholsterers, cabinetmakers, gilders,… 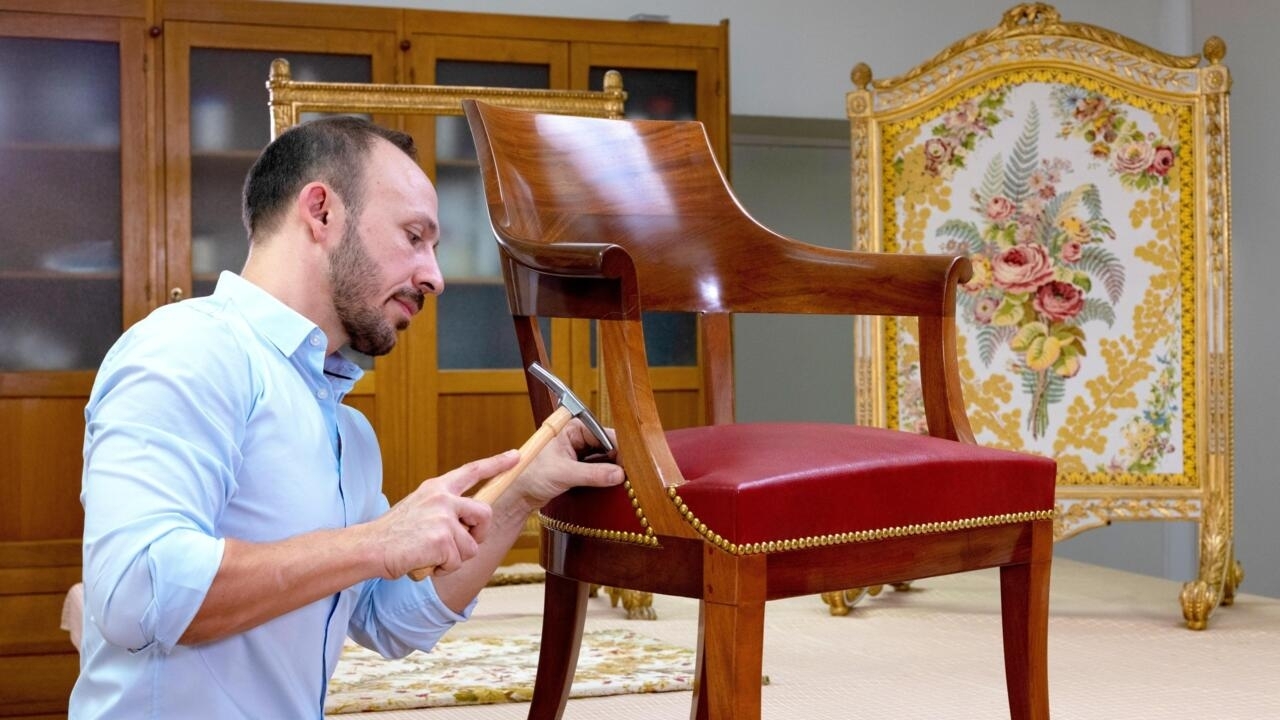 The hand of Laurent Jannin, upholsterer at the Palace of Versailles

Laurent Jannin, upholsterer at the Palace of Versailles.

This summer, head to the Palace of Versailles.

We put our microphones in the area and its workshops to introduce you to some of these crafts.

These women and men maintain, restore and embellish the heritage of the Palace of Versailles.

They tell us about their careers and their know-how in motion.

Screens, wall hangings, laying of fabrics on the walls, trimmings, covering or restoration of seat upholstery, at the Palace of Versailles, the upholsterer's profession is exercised as a whole.

Upholsterer, Laurent Jannin, welcomes us into his workshop with his scents of hessian, linen and horsehair.

We are not going to innovate.

We are going to try to be as close as possible to what could have existed, according to research on the piece of furniture, to give it back the appearance of what it could have been at the time.

Upholsterer's nails at the upholsterers' workshop at the Palace of Versailles.

It was in college that he discovered the profession of upholsterer.

After the baccalaureate, he returns to this first idea: to do a work-study apprenticeship.

At the age of 20, a craftsman trained him in the trade as a whole: the upholstery of seats of all styles and the association of his seats with textile decoration.

After practicing in the studio of his apprentice master, he competed for a position as an art technician at the Ministry of Culture.

In 2003, he joined the Mobilier national.

In 2014, he applied internally to the

It's museography, we're going to work in a very traditional way.

The periods present at the castle are mainly the 18th and 19th centuries, so we will only use these techniques with the appropriate raw materials.

For each piece of furniture, it is necessary to have a technical knowledge of our trade but also to know the history of art, the design, notions which allow to apprehend the volumes, the fabrics adapted to the good style.

We have discussions with the curators before apprehending the works, they are the ones who do the scientific research on the works.

With all these skills combined, we manage to recreate the decorations and also restore the furniture to its original appearance.

The upholsterers' workshop at the Palace of Versailles.

The upholsterer works with natural materials such as horsehair during traditional upholstery.

A unique know-how but preceded by another stage.

When we strip a seat of its old trim, that's when we find out what was inside.

We are the first to rediscover, a bit like archaeology, it's sometimes surprising.

There are seats where we find a letter, a coin, anything that may have fallen into the seats by anyone who used it.

The upholsterers' workshop at the Palace of Versailles.

Laurent Jannin is happy to do a job that still fascinates him.

Also a teacher at the Tours trades campus, he is keen to confront apprentices, students and trainees with the reality of the profession.

I tell the students a lot to observe the gestures.

I give my way of working but it's not THE way to work.

After 25 years of experience, all the technicians I have come across, former students and even students have a way of doing it and that has enriched me.

There is nothing fixed and I tell the apprentices

: "be curious and you will make your hand according to everything you see".

Find all the episodes of 100% Création on: