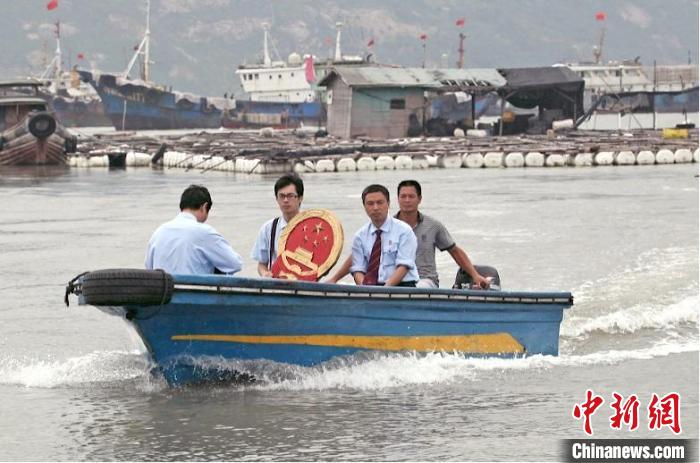 At the beginning of the establishment of the Sandu Maritime Circuit Court, the judges took the national emblem and sat on the speedboat to the fishing raft to try and mediate the case.

According to reports, the Sandu Maritime Circuit Court was established in May 2001. It is the country's first pastoral mobile court at sea. It has jurisdiction over various cases in the sea and land areas of Sandu, and hears and mediates more than 120 civil and commercial cases annually.

The relevant person in charge of the Jiaocheng District Court said that in order to improve the level of litigation services, deepen the construction of smart courts, and promote the governance of litigation sources through multiple channels, the country’s first 5G+ maritime circuit court was launched in June this year.

Walking into the courtroom, I saw a special court trial workbench set up, providing judges and parties with a 5G remote court trial terminal that can live and record synchronously, using 5G+4K technology transmission to ensure clear and smooth images.

According to the person in charge of the court, in order to avoid mutual interference, the court is also equipped with Bluetooth headsets. The remote court trial terminal is simple and convenient to operate, and supports multi-party and multi-terminal online. The parties and judges can choose to use it on the circuit court side, the court headquarters side, or even at home according to their needs. The mobile terminal enters the court hearing.

According to reports, the Sandu Maritime Circuit Court has developed and launched a 5G mobile cloud platform to provide online multi-purpose, high-efficiency and full-process litigation services such as evidence submission, mediation, and pretrial conferences. From court hearing to mediation, the whole process is handled online, creating a new "island + online" handling model for all litigation services, and effectively improving the gold content of "no need to run once".

During the trial, the trial transcript can be generated immediately through the real-time voice transcription function to improve the efficiency of the trial. The judge can also consult the transcript and electronic file at any time according to the needs of the case trial, and conduct online evidence and cross-examination.

The above-mentioned person in charge said that the online trial system is highly operable and convenient, bringing a better experience to all parties involved in the litigation.

According to reports, the 5G+ Sandu Maritime Circuit Court innovatively uses VR technology, and with the help of 5G communication technology, the masses can use VR glasses equipment to provide a real "trial world" for the masses far away on the island, and experience litigation services in an immersive manner.

The above-mentioned person in charge said that after the parties wear VR glasses to enter the live broadcast system, they can turn their heads or bodies to watch the live broadcast of the trial in 360 degrees without dead ends; people who do not have VR glasses can also scan the code with their smartphones and use their mobile phones anytime, anywhere. 360-degree viewing of live trials and on-demand trials of cases, without restrictions of time, space and region.

Science and technology escort the new pattern of comprehensive management

At the beginning of the establishment of the Sandu Maritime Circuit Court, the judges carried the national emblem and sat on speedboats to try and mediate cases on the fishing rafts. There was a square table and four square stools, which is a true portrayal of the time.

On the first day of the "upgrade" of the court, a dispute over the comprehensive regulation of marine aquaculture that had been grieved for many years was resolved.

Since 2011, a fisherman named Lin has used Li’s 34 baskets of cages in Sandu’ao Baichengtan to cultivate cucumber fish. During the comprehensive renovation of marine aquaculture in 2018, these cages were dismantled and transferred to production, and Lin received compensation. The payment was 74,800 yuan, and only 20,400 yuan of which was returned to Li. The two had been arguing over the ownership of the compensation for many years.

After the case was filed, the judge contacted both parties to negotiate and resolve the case many times. Due to the busy farming work of the parties, they could not go to the court for mediation, and the maritime signal was unstable and could not pass online mediation. Even the dispute was never resolved.

After the opening of the 5G+ Sandu Maritime Circuit Court, the judge immediately contacted the parties who were working on the fishing rafts and guided them to the court located near the fishing rafts. Through the 5G mobile cloud platform, they carefully explained to both parties the specific standards of the comprehensive compensation policy for marine aquaculture. Do the work of both parties.

After mediation, Lin returned 10,000 yuan to Li, and the two sides shook hands and made peace.

The person in charge of the court said that it will continue to optimize the 5G mobile cloud platform, break through internal and external network data barriers, expand 5G + trial service functions, and provide "high-efficiency", "low-cost" and "zero distance" litigation services for the islanders.