The jewel as a symbol of social status. Which and which brands are worn by the coolest women on the planet?

The jewels are not only limited to the architecture of necklaces, rings, tiaras or earrings, but also take the form of a wristwatch that, in case you didn't know, was before... 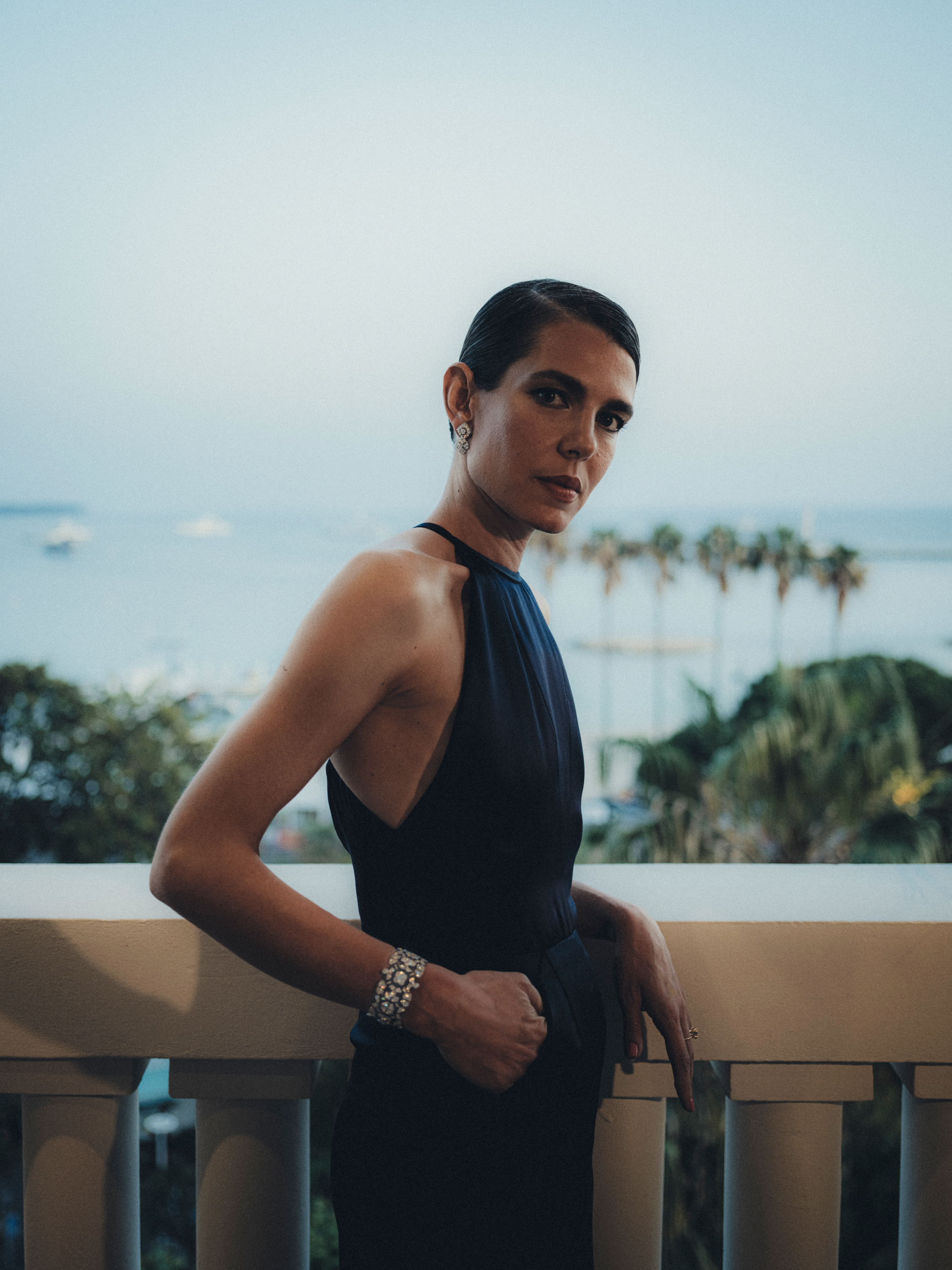 The jewelery is not only limited to the architecture of necklaces, rings, tiaras or earrings, but also takes the form of a

which, in case you didn't know, was a female heritage rather than a male one.

And as in the case of the man (for whom the only real jewel within his reach is the watch, or almost, because the trend of wearing High Jewelery mega-necklaces together with the tuxedo bow tie is all the rage in Paris) it is a symbol of

Queens, first ladies, actresses, dancers, businesswomen, nobles and singers: they all want to assert their power with the beauty of precious stones.

And it is that Marilyn Monroe already said it while wearing Harry Winston's immortal choker in 'Gentlemen Prefer Blondes' in the same year of the coronation of Queen Elizabeth II: "Diamonds are a woman's best friend".

To support Marion Cotillard at the premiere of her new work, 'Brother and Sister', at the Cannes Film Festival, Carlota Casiraghi made a spectacular appearance on the red carpet of the Cannes Fesival hand in hand with her partner, Dimitri Rassam .

Of course, the black satin dress she was wearing was also from Chanel, a firm for which she is an ambassador and with which she has had a special bond since she was a child (Carolina de Monaco was a close friend of Karl Lagerfeld).

Queen Letizia's coming-out took place in Copenhagen, in 2004, at the royal wedding of Federico and Mary of Denmark.

The art deco bow earrings that she wore with Lorenzo Caprile's red dress were from Doña Sofía and are made of diamonds and rubies.

She completed the look with a ruby ​​and diamond brooch also belonging to Doña Sofía and created by Marcel Chaumet (1886-1964), who succeeded his father at the 'maison', Joseph Chaumet, in 1928. The stones for the double brooch were provided by the Spanish royal house in 1935, when Alfonso XIII reigned.

It is a very representative piece of the 1930s due to its transformability (the brooch could be worn independently or together) and its geometric Art Deco style.

Beyoncé made her appearance at the most anticipated show of the year wearing High Jewelery creations that include the 'Flappers' choker, combined with the exceptional 'Shards Of Mirror' necklace and 'Exotic Charm' earrings, the latter belonging to the 'Messika' collection. by Kate Moss'.

Eight years ago, the photo of Beyoncé in front of the Mona Lisa 'broke the Internet'.

On her finger she wore a 'Glam'Azone' double diamond ring from the then young and avant-garde French high jewelery brand Messika.

Since then it is common to see her wear jewelry exclusively created for them by Valérie Messika.

The House of Garrard, jeweler to the English crown for many years, has always been associated with its characteristic sapphires set in a cluster of diamonds.

Perhaps the most famous Garrard jewel in recent years has been the oval sapphire ring from Ceylon that belonged to the mythical Lady Di, who chose it herself from the house catalog and which apparently cost 27,000 pounds at the time and which it has now reached a value of 300,000 pounds sterling (about 350,000 euros).

The ring became one of the most demanded and desired in the world, so many jewelry houses rushed to make replicas.

Three decades later, Prince Charles' son William gave the prized jewel to Kate Middleton when he proposed to her.

However, the jewel was bequeathed by Diana to her youngest son, Harry, who, in a generous gesture, gave it to his older brother so that the future queen of the United Kingdom would wear it and thus ensure that the memory of his mother would still be present in the British crown.

The dancer and choreographer, appointed in 2019 as the first female choreographer of the French Academy of Fine Arts, joins the Panthère community as an ambassador for Spain and Portugal.

Likewise, he has collaborated with a multitude of relevant artists from the world of opera, cinema, fashion and music, and with the Maison Cartier, to which he is linked by a close friendship.

Among his multiple recognitions and decorations, those of Chevalier de l'Ordre National du Merite, 'Commandeur de l'Ordre des Arts et Lettres' from the French Ministry of Culture, or the Gold Medal for Merit in Fine Arts, awarded by his the King of Spain in 2009.

Queen Elizabeth II is a huge fan of watches.

In fact, in her long life she has worn models from firms such as Cartier, Jaeger-LeCoultre, Omega, Audemars Piguet or Patek Philippe.

She has worn several models from this last manufacture, but if there is one that defines her, it is the one she wore for her coronation, in 1953, the Jaeger-LeCoultre 'Caliber 101', whose mechanical movement is still the smallest of the world.

With a minimalist format, the watch is accompanied by a bracelet with pavé diamonds.

This watch is still manufactured today in different versions that tend to exceed 400,000 euros.

In 2012, on the 60th anniversary of her reign, Jaeger-LeCoultre gave the monarch another model of the 101 watch in tribute to the piece she wore at the time of her coronation.

Chiara Ferragni likes watches as much or more than jewelry, especially from the Hublot brand, whose image she is and with which she lavishes countless photographs and stories in her hectic life as a businesswoman and superinfluencer, with more than 27 million followers on Instagram.

Whether it's the 'Big Bang Millennial Pink' model - the first self-proclaimed 'genderless' watch - or the brand new 'Big Bang Integral King Gold Pavé', which bears more than 1,000 diamonds and costs 98,700 euros, it is never seen without a watch.

Hublot's global ambassador epitomizes that inspiring 'will is power' attitude.

Twelve years after launching theblondesalad.com, Chiara has managed to star in a success story.

It took her just a few months to turn her hobby into a business, something she achieved by grabbing the attention of the media and the fashion world and placing her name alongside top luxury brands when it didn't yet exist. Instagram.

The first lady of the United States, Nancy Reagan, was a great lover of precious stones from the 'bel paese'.

During the national holiday of July 4, 1986, at the historic reopening of the Statue of Liberty in New York, she wore a ruby, sapphire and diamond ring that imitated the American flag made by Bvlgari.

In the same auction, 700 lots from the Reagan couple were released, including decorative objects in the style of the 'Hollywood Regency' (when Reagan was an actor), a large number of books with personal dedications, souvenirs and presidential gifts , artwork from her Bel Air residence, and jewelry and handbags from Mrs. Reagan's collection.

Bulgari has always been close to women and not only to beautify them, but to empower them, as shown by its latest initiative: the Bulgari B.Zero1 Aurora awards that celebrate the innovative power of women and in which Sharon Stone, Rita Ora, Kylie Minogue, Veronica Yoko Plebani, Edward Enninful OBE and Munroe Bergdorf were in charge of paying tribute to women such as the Italian actress Alice Pagani or Michelle Francine Ngonmo, president of the Afro Fashion Association.

The Yellow Diamond from the New York house did not make its debut on a woman's neckline until 1957, when the firm lent it to Mary Whitehouse to wear during a charity ball organized by the company itself.

Born in 1895, Mary was the granddaughter of railroad tycoon Charles Crocker (co-founder of the Central Pacific Railroad) and was married to Edwin Sheldon Whitehouse, the United States ambassador to countries such as Guatemala and Colombia.

Mary Whitehouse was one of the most influential women of the 'high society' of the time, as indicated by the fact that in 1952 she became one of the first to be part of the board of trustees of the Metropolitan Museum of Art.

The yellow diamond is one of the largest in the world (128.54 carats) and was bought by the firm in 1877. Priceless, it has only been worn by four women: Mary Whitehouse, Audrey Hepburn, Lady Gaga and Beyoncé.