One "Inkstone" for a thousand years: Gansu Tao Inkstone seeks to inherit and bail out the exhaustion of resources

China News Service, Lanzhou, June 29 (Zhang Jing) When writing with a pen in the Internet age has become a luxury, the inkstone table among the four treasures of the study does not often appear in the homes of ordinary people. At the same time, there is also a saying in the Tibetan inkstone circle about the four famous inkstones: "The stone materials in the old pit of Duan Inkstone are exhausted 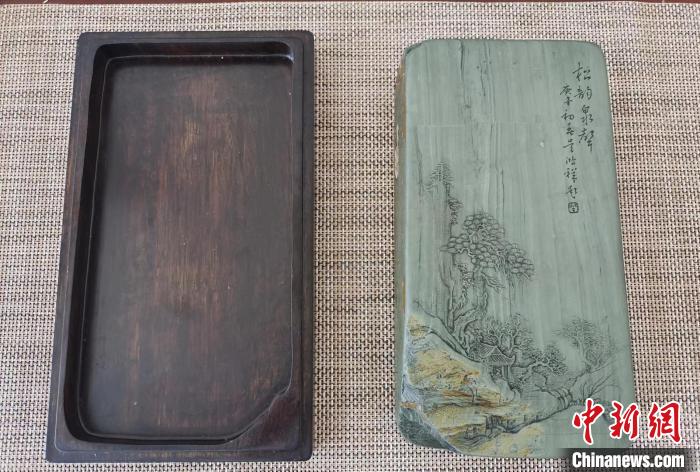 China News Service, Lanzhou, June 29 (Zhang Jing) When writing with a pen in the Internet age has become a luxury, the inkstone table among the four treasures of the study does not often appear in the homes of ordinary people.

At the same time, there is also a saying in the Tibetan inkstone circle about the four famous inkstones: "The stone materials in the old pit of Duan Inkstone are exhausted, the stone materials in the Longwei Mountain of She Inkstone are becoming scarce, and the Lama Cliff, which produces the old inkstones from the Tao River, has been submerged in the water, and the mud is clear. The craftsmanship of inkstone is also difficult to restore to the ancient level.”

Inkstone, as an auxiliary tool for Chinese writing and painting, has lasted for five or six thousand years.

In particular, the exquisite Tao Inkstone has been exported to Japan, Southeast Asia and other places, and is a treasure with a high reputation in the international market.

However, in the face of unsatisfactory market sales and depletion of inkstone ore resources, how will inkstones, as cultural carriers, explore the connotations of history and culture?

Take Taoyan in Gansu Province, which has a history of more than 1,300 years, as an example. Taoyan's best stone "Laokeng Stone" is produced in Taoyan Town, Zhuoni County, Gannan Prefecture. It is as blue as a baby's skin, but the reserves are very small. If you get a piece of duck-headed green pit stone today, it can be regarded as a thousand-year-old antique.

Other stones in the Laokeng stone include green stone, parrot green, and grebe (pì tī) blood, but the market reserves are still less than 2%.

Lu Baosheng, who was born in Taoyan Town, has been making inkstones for nearly 30 years. Almost every household in the local village makes inkstones to support their families. They have experienced the rise and fall of Taoyan.

Faced with the helplessness of "it is difficult for a clever woman to cook without rice", some people gave up their crafts and turned to make a living, while others felt that "there are fewer and fewer high-quality stones, one should be cherished when one is made," and Lu Baosheng decided to "survive in the cracks".

Inkstone not only has practical value, but also a handicraft with high aesthetic value.

Therefore, the craftsmanship value of Taoyan with skillful and meticulous craftsmanship has become a new way that Lu Baosheng has worked hard to explore in recent years.

The inkstones sought after by the literati of the past dynasties are all "one inkstone and one inscription".

And Lu Baosheng believes that it is necessary to "one box and one extension", that is, a good inkstone should have a practical and beautiful box for collection, and the inkstone shape should be preserved by the extension technique, thereby increasing its cultural connotation, and the future will be higher. collection value.

The picture shows Taoyan artists in Gannan Prefecture, Gansu Province, in order to enhance the cultural connotation of Taoyan, they produced a finished product display of "one box, one extension".

Positioning the collection value, Gansu Taoyan, which has cross-border cooperation in various fields such as calligraphy and painting, transmission and aesthetics, set sail again, and seeks the development of high-quality products.

The reporter combed and found that in recent years, Gansu Province has set up cultural skills and skills training courses through expert teaching and folk artist guidance, exploring and rescuing the varieties and skills of traditional arts and crafts, collecting and collecting traditional arts and crafts boutiques, in order to develop the development of Taoyan culture way.