The Sharjah Book Authority, during its participation in the annual conference and exhibition of the American Library Association in Washington, opened the door for major Arab libraries and cultural institutions to strengthen cooperation and joint work with their international and foreign counterparts. 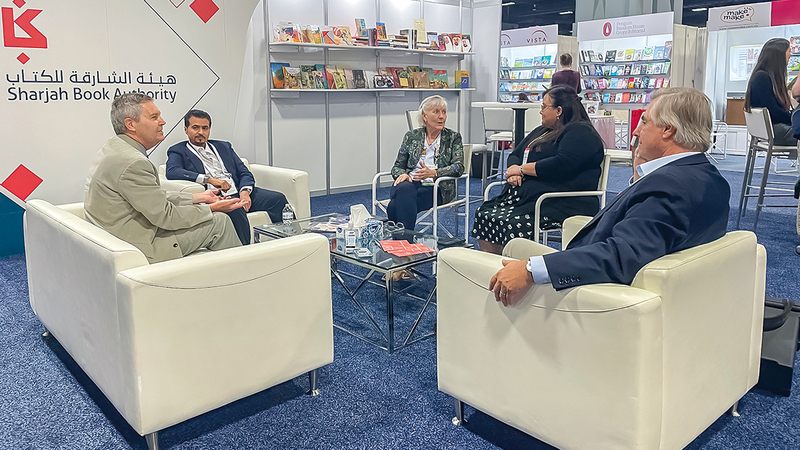 The Sharjah Book Authority, during its participation in the annual conference and exhibition of the American Library Association in Washington, opened the door to major Arab libraries and cultural institutions, to enhance relations of cooperation and joint work with its international and foreign counterparts, as its participation in the event came as the only representative of the Arab region in the largest event of its kind. At the world level, which was held from the 23rd to the 28th of this month.

The conference witnessed a wide attendance of librarians and their employees, experts, authors, publishing houses, friends of libraries, exhibitors and interested guests, from all over the world. That would affect the transformation process and the sustainable development witnessed by the sector.

The delegation of the Sharjah Book Authority, headed by the head of the authority, Ahmed bin Rakkad Al-Amiri, held a meeting with the President of the American Library of Congress, Dr. Carla Hayden, and the two parties discussed ways of cooperation and joint work, based on the centrality of the Emirate of Sharjah among the capitals of global knowledge, and the impact of its efforts in activating the role of libraries in Achieving the aspirations of the Sustainable Development Goals, and what the Library of Congress represents globally, as it is an unparalleled resource, with a total of more than 170 million items containing more than 39 million indexed books and other printed materials in 470 languages.

The authority organized a meeting with those responsible for the annual conference and exhibition of the American Library Association (ALA), to discuss the steps for organizing the ninth session of the "Library Conference", which will be organized on the sidelines of the 41st session of the Sharjah International Book Fair, as the conference embodies on the ground the effectiveness of cooperation and joint work with Cultural institutions in the world and its impact on creating opportunities for exchanging knowledge and developing the expertise and experiences of workers in the industry and knowledge production sector.

During its participation in the event, the authority's delegation met with a number of participating American and international publishers, and discussed with them the opportunities available to develop joint work in the fields of publishing and translation from Arabic into English and French and vice versa.

The delegation also met with a group of representatives of American publishing houses interested in participating in the Sharjah International Book Fair.

The pavilion of the participating authority witnessed remarkable interest from the audience of the conference, as a number of publishers, representatives of cultural institutions and visitors expressed their interest in the publications of His Highness Sheikh Dr. Sultan bin Muhammad Al Qasimi, Member of the Supreme Council and Ruler of Sharjah, as well as in the publications presented by the “Kalimat” group. It is led by the authority at the level of expanding global publishing markets, supporting translation efforts from and into Arabic, and developing job opportunities and joint efforts with major global libraries.

Ahmed Al Ameri said: “The Sharjah Book Authority, in its international participation, stems from the vision of His Highness, the Ruler of Sharjah, to enhance constructive and fruitful communication with counterpart cultural institutions in the region and the world, support the writing and publishing movement, and enhance the contribution of libraries to development at the local and international levels. His Highness has always emphasized The role of libraries is central in any comprehensive and large civilized renaissance project, and that libraries are permanent sources of knowledge and human building.

He added: “These meetings to examine the reality of libraries embody the extent of the world’s interest in protecting libraries and what they represent of human heritage and a civilized scene and evidence of the status of the book, and its role in achieving the upliftment and progress of societies. and its influencers to exchange experiences and best practices, in a constant and relentless pursuit to achieve a comprehensive and sustainable renaissance of Arab culture, and to open sustainable windows for openness to other cultures.

Mansour Al-Hassani, head of the sales department at the Sharjah Book Authority, said: “The authority continues to lead the way in promoting reading, books, and the publishing sector in general. It also highlighted the status and role of the Sharjah International Book Fair, and the extent of its impact on the book industry regionally and locally.

The activities of the annual conference and exhibition of the American Library Association began in Washington, and concluded the day before yesterday.