China News Service, Changchun, June 28th (Li Dan) Ka Ka, Ka Ka... With the crisp sound of flower scissors, Zhang Guoxiang was busy pruning and cutting the thorns of the roses just picked, and sorted them according to quality and specifications. "I have been working here for four years, and I can earn more than 40,000 yuan a year." Zhang Guoxiang's face was full of smiles.   Working at the doors 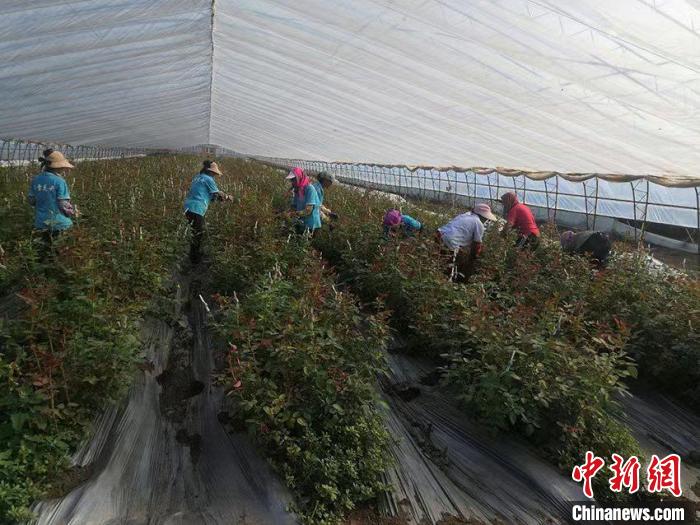 China News Service, Changchun, June 28th (Li Dan) Ka Ka, Ka Ka... With the crisp sound of flower scissors, Zhang Guoxiang was busy pruning and cutting the thorns of the roses just picked, and sorted them according to quality and specifications.

"I have been working here for four years, and I can earn more than 40,000 yuan a year." Zhang Guoxiang's face was full of smiles.

Working at the doorstep and earning twice as much... 54-year-old Zhang Guoxiang is in a happy mood in a romantic rose garden.

"This life is not tiring, I make money by smelling flowers every day. I still have cornfields at home, and I have bought a house in the city. I think this life is too promising now."

Workers are busy in the rose greenhouse.

In the garden, the delicate roses are budding, making people fascinated.

"At the time of '520', all 600,000 roses were sold out, and we will welcome the 'Tanabata'." Liu Shicheng, the owner of the rose garden, has a clear plan for the supply and sales of each festival.

In the past ten years, Liu Shicheng and Yang Xue have paved the romantic "rose business" with their hard-working hands, and led the villagers to embark on the road to prosperity.

At first, Liu Shicheng and his wife only had two greenhouses. Because they didn’t know the technology, they didn’t cover the roses with plastic film for insulation in the first winter, and neither of the two rose seedlings survived.

Later, with the help of the agricultural department of Dehui City, the couple kept "charging" themselves, learning new technologies, introducing new varieties, and researching the market.

After clarifying the conditions such as temperature and soil quality, they planted varieties such as Diana and Tannick in 2013, which were successful.

Liu Shicheng and Yang Xue were busy in the rose greenhouse.

The mature roses are colorful and of good quality, which are favored by many customers, and the supply is in short supply for a while.

"The hard work in the past has not been in vain." Yang Xue breathed a sigh of relief.

The implementation of the rural revitalization strategy in Jilin Province made Liu Shicheng realize the potential of rural entrepreneurship development.

Beginning in 2018, he made additional investments to expand the rose garden for three consecutive years. The couple registered the "Cheng Xue Family Farm", and their career development has become more large-scale.

Today, their rose greenhouse has been expanded to 30, and the number of roses has reached 250,000.

Flowers are mainly supplied to the markets of Changchun, Jilin, Harbin and surrounding counties and cities.

"Three to four crops can be harvested throughout the year, and when the market is good, each flower can be sold for more than 2 yuan." Yang Xue said that roses bring an annual income of nearly 5 million yuan to the family.

This year, the couple renovated their parents' home with new furniture and state-of-the-art air heating.

"All good days are made." Yang Xue said.

When roses are on the market, a large number of workers are required to pick them.

More than 120 surplus laborers in Yanhe Village have been successfully employed in the Rose Garden, and their income has increased accordingly.

Lv Wendong, a 50-year-old villager, has worked in the rose greenhouse for five years. His stable income makes him feel at ease. He plans to add a water heater to his home.

"There is nothing to worry about now, living conditions are no worse than in the city."

Chen Yao, a publicity member of the Party Committee of Zhuchengzi Town, Dehui City, introduced that in recent years, Zhuchengzi Town has built roads along the river to improve the living environment of the villagers and facilitate the transportation of roses.

The town also actively coordinates the agricultural sector to deliver the latest agricultural policies to the villagers in a timely manner.

Now in Yanhe Village, the life of the villagers is like a blooming rose, the sweeter it gets.

"We also plan to do deep processing of roses, and also drive more villagers to become prosperous together." Liu Shicheng looked forward to the next step.