I am almost certain that the Islamic world has not witnessed in its modern history a funeral like that of the Turkish scholar Mahmud Effendi, may God have mercy on him, who died at the age of 93, after a terminal illness. Life in Istanbul was completely disrupted on the day of his funeral. 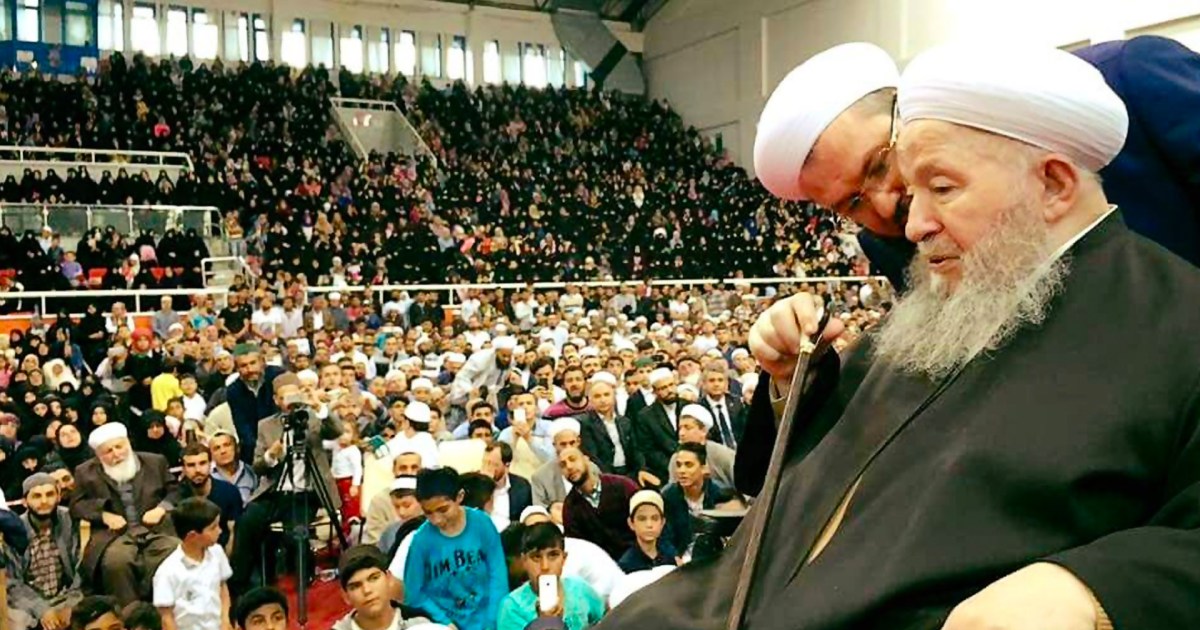 I am almost certain that the Islamic world has not witnessed in its modern history a funeral like that of the Turkish scholar Mahmud Effendi, may God have mercy on him, who died at the age of 93, after a terminal illness. Life in Istanbul was completely disrupted on the day of his funeral.

On that day, the Al-Fateh Mosque prepared since the evening prayer on Thursday for his funeral, which was held the next day, and the majority of the worshipers spent their day and stayed in the mosque, waiting for the funeral witnesses, while those who witnessed the dawn prayer on Friday remained in the mosque’s courtyards, waiting for the funeral prayer that was held after the prayer. Friday, and as soon as the funeral prayer came, the main and subsidiary streets of the Al-Fateh area were filled with worshipers, for a distance of approximately two kilometers, and the number of worshipers was estimated at 3 million people, which did not happen in the history of the Turkish state.

The funeral, which was attended by Turkish President Recep Tayyip Erdogan, senior ministers and officials, as well as Turkish and Arab scholars, was a real referendum on the strength of the Effendi trend in Turkey, after tens of thousands of Turks from villages, towns and distant states came to witness Effendi's funeral, and some saw it as a referendum on The strength of the AKP in Istanbul despite all that was said about its decline.

Sheikh Mahmud Effendi was subjected to tremendous pressure with every military coup. In the 1960 coup, he was in danger of closing his activities, but with the limitation of it, the crisis was overcome, and in the 1980 coup the matter was repeated, when the putschists sought to expel Sheikh Mahmoud from Istanbul towards (Eskisehir) for their fear. Whoever expands his movement and group at their expense, which is usually in the interest of their political opponents

His birth and upbringing

Mahmud Usta Osmanoglu, better known as Mahmud Efendi, was born in the village of Tushanli, in the town of Ov in the state of Trabzon in 1929. His father, Ali Effendi, was the imam of the village mosque, and his mother was one of those who witnessed the piety of the villagers and met them, and the father always raised his hands to the sky with Every time he prayed, he prayed that God would grant him a righteous son, and with his birth he took great care of him, and he memorized the Qur’an at his hands when he was 6 years old.

Then he sent him to the region (Kayseri) to study grammar, morphology and Persian language, at the hands of Sheikh Tasbihi Zadeh, one of the region’s senior scholars, to receive lessons with other scholars, in the sciences of Arabic language, rhetoric, speech, hadith and jurisprudence, and during his father’s performance of the Hajj, he died in Mecca He was buried in Al-Mualla Cemetery, where the burial of Mrs. Khadija, may God be pleased with her, and then lost his main assistant and assistant.

In 1952, Mahmud Effendi had joined the military service, and there he got acquainted with his sheikh who was eager to see and hear him, Sheikh Ali Haidar, who had previously restored the work in the manner of Ismail Effendi Naqshbandi, and he was the owner of the Ismail Agha “Effendi” mosque in Al-Fateh, which was built The size of the Kaaba.

Ismail Oglu was one of the famous Mufti of the Ottoman Empire, and he used to give fatwas on the four schools of thought, but with the arrival of Mustafa Kemal Ataturk to power, he closed the mosque and turned it into a stable, so Sheikh Ali Haider came and opened the mosque and spread the flag, so he had followers among young men and women, and the Charshamba area was where Sultan Selim Yavuz Mosque in Al-Fateh is one of his strongholds that were taken with blood - as their followers say - where many martyrs fell for their insistence not to neglect it.

It was reported after the coup of union and promotion that the global plan was to convert it to a second Vatican, for its vital location on the Bosphorus, the presence of the historically important Phanar cathedral for them, and finally for Istanbul’s position in the global church in general, but the Ismail Agha group, along with Sheikh Ali Haidar and Sheikh Mahmud Effendi, resisted For this scheme, they pushed their followers to buy the area with their personal money, and therefore the visitor sees the large number of black Turkish cloaks, and the large number of schools endowed there, where the well-to-do people buy houses and endow them for the congregation, in accordance with the orders of Sheikhs Ali and Mahmoud.

The death of Sheikh Ali Haider and the succession of Effendi

With the end of his military service in 1954, Sheikh Ali Haider asked his student Mahmud Effendi to take over the Imamate of the Ismail Agha Mosque, which he had assumed by himself. Six years later, specifically in 1960, Sheikh Ali Haider died, who was issuing fatwas on the four schools, to receive the banner after him, his student Najib Mahmoud Effendi.

The movement in his time expanded in a strange way, horizontally and vertically, and reached dozens of countries in Africa and Asia, and I still remember a conference months before the departure of Mahmoud Effendi for their representatives in African countries, which was held in the Sultan Selim Yavuz region, where it lasted for days, attended by him, and spent exchanging experiences and evaluating work. in their areas.

In Afghanistan, as soon as the Taliban government seized power, Mahmoud Effendi quickly sent his delegation there to assess the Afghan needs and provide what can be provided to the Afghan people in terms of urgent relief, education and the like, and the same thing happened before in Syria, as the group was active in relief projects A well-known educational institution in the liberated north of Syria.

The Naqshbandi and military coups

Sheikh Mahmud Effendi was subjected to tremendous pressure with every military coup. In the 1960 coup, he was in danger of closing his activities, but with the limitation of it, the crisis was overcome, and in the 1980 coup the matter was repeated, when the putschists sought to expel Sheikh Mahmoud from Istanbul towards (Eskisehir) for their fear. Whoever expanded his movement and his group at their expense, which is usually in the interest of their political opponents, but the Mufti of Istanbul at the time, Sheikh Salah al-Din Kaya, stood with him, and the decision was canceled as a result of huge pressures exerted on the putschists, which prompted the leader of the coup, General Kanaan Evren, to say at the time: They say I can do everything, and I couldn't move an imam."

During the years of embers that passed in Turkey - and more - the group was able to adapt to the circumstances, and establish for itself a supportive and supportive Turkish environment, among officials, scholars, sheikhs and elites, which prevented it from clashing with the government and the putschists in particular, and perhaps this is from the deep legacy of the Hanafi school, which was A doctrine of the Ottoman Caliphate, and before that of the Abbasid Caliphate, its interest in the fates and strategic issues over the immediate tactics, was an important reason for avoiding and avoiding the difficulties and threats to which it was exposed.

His meeting with Turgut Ozal and his foreign visits

In 1988, Mahmoud Effendi made perhaps the first foreign visit, and it was to Damascus, and he met its scholars, and since that time he began to send his followers and students to the scholars of the Levant in order to receive knowledge and increase from it, and after 3 years he visited Germany and Britain in order to call to God, so he opened offices for him and spread his followers.

His meeting with Turgut Ozal lasted for 3 hours, during which he preached the most explicitly, which reflected the nature of the two people. Ozal accepted Mahmoud Effendi's advice, and the latter did not compliment the Prime Minister.

Mahmud Effendi was subjected to more than one assassination attempt, and what hurt him most was the stabbing of one of his students, Bayram Khidr, in the mihrab of Ismail Agha Mosque by unknown assailants. As part of his foreign visits to India, he met with Imam Al-Suhrandi.

Failing the 2016 coup and its implications

Mahmud Effendi and his followers played a prominent role in thwarting the 2016 coup attempt, and President Recep Tayyip Erdogan, who knows his power and authority on the electoral street, did not forget that, and during 2010 he ranked 34th among the influential figures in the Islamic world.

Among his famous sayings in Turkey: “If you see me pray the 3 Sunnahs of the Prophet, peace be upon him, do not pray behind me.”

And he said to his followers and fans: “Abu Jahl expelled the Prophet, peace be upon him, from Mecca, and you do not expel him from your hearts.”

He always repeated before his followers, when they asked him about dignity, the saying of Shah Naqshbandi al-Bukhari: “Integrity is the eye of dignity.”

He was buried on Friday, June 24, 2022, next to Sheikh Ali Haider, in the Edirnekapi cemetery in Istanbul, may God have mercy on him and accept him in heaven.