Newsletter: From Beijing to Huade's first secretary in the village to improve the spiritual world of villagers

China News Service, Ulanqab, June 26th: From Beijing to the first secretary of Huade in the village to improve the spiritual world of villagers   China News Service reporter Li Aiping   "Now I'm a villager in Bulongwan, because my wife is very supportive of me." Feng Lixue, 36, was afraid that the reporter didn't understand and repeated it on purpose.   On June 25, when Feng Lixue stepped int 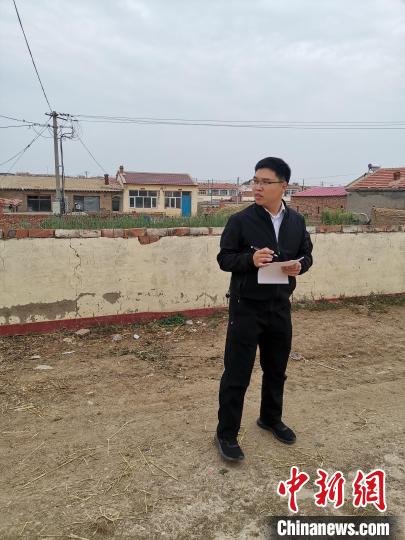 China News Service, Ulanqab, June 26th: From Beijing to the first secretary of Huade in the village to improve the spiritual world of villagers

"Now I'm a villager in Bulongwan, because my wife is very supportive of me." Feng Lixue, 36, was afraid that the reporter didn't understand and repeated it on purpose.

On June 25, when Feng Lixue stepped into Bulongwan Village, Chaoyang Town, Huade County, Inner Mongolia Autonomous Region, and looked at the villagers who got along with him day and night, his eyes were very bright.

"Everything that happened here is still fresh in my memory. I serve the villagers here from the bottom of my heart," said the first secretary in the village from the Finance Department of the Comprehensive Bureau of the Central Editorial Office in Beijing.

Feng Lixue was appointed by the organization from Beijing to Huade as the first secretary of the village on April 15, 2021. When he first arrived, his first impression here was that the overall landscape was decent and the mountains and rivers were beautiful.

"The overall conditions of Bulongwan are very good. The only shortcoming is that the spiritual life of the villagers is relatively poor." Feng Lixue said that when he first came here, he thought of cultivating the spirit of the villagers.

Wang Jinlin, Party Secretary of Bulongwan Village, said in an interview with reporters: "Before Secretary Feng didn't come, many people worked here, and almost all of them used handwriting. Now everyone can basically operate with computers, which is a great improvement." Take the initiative to learn new knowledge, and no one will say that reading and learning are useless.”

How to bring a better spiritual world to the villagers?

Feng Lixue decided to lead the villagers to raise the national flag together, "Don't underestimate this move. During the national anthem, everyone's mood immediately changed, and they instantly felt home and country feelings."

"When the national flag fluttered in the wind over Bulong Bay, at that moment, many villagers, including me, were not too excited." Wang Jinlin said excitedly.

Feng Lixue told reporters, "Some villagers' craftsmanship, which had been abandoned for many years, has suddenly become useful. Everyone's sense of participation is too strong, for fear that they will not have the opportunity to perform on stage."

"We also held tug-of-war, rope skipping, chess, poker and other competitions in our village." 74-year-old Zhang Chunfu said excitedly, such activities made everyone feel satisfied and walked more energetically.

Local people said that in the past, during the slack season, everyone would either visit from house to house or get together for a drink. Since Feng Lixue served as the first secretary of the village, "this phenomenon has disappeared now, and when everyone is fine, they all go to the village committee. Rehearse various programs in the meeting room.”

The enthusiasm of the villagers finally made their spiritual world more open.

On the eve of this year's Spring Festival, the villagers of Bulongwan held the first "Country Spring Festival Gala" in the local area. "Some of the villagers who participated in the dance have been strictly trained by dance teachers from Beijing, and they danced really well."

"Two graduate students from Peking University and Nankai also hosted programs for our village," said Li Xu, a local resident. "As seen on TV, their Mandarin is so standard and their voices are so sweet."

In the past year, Feng Lixue also set up a reading room in the village committee office for the first time. The reporter saw at the scene that about 2,000 books were neatly arranged in different categories, which looked particularly elegant.

Feng Lixue revealed, "The main group of people who come here to read are students. These children can come here to borrow various world famous books and other books, and we will update the books regularly."

Under the leadership of Feng Lixue, Bulongwan Village set up a village history museum for the first time.

"The local branch secretary, military dependents, teachers, and even the power-on time are all carefully recorded." Feng Lixue said that the biggest role of the village history museum is to make villagers feel proud when they communicate with the outside world, and it is also preserved for future generations. A special file.

In the past year, what made Feng Lixue sigh was his wife Li Zhimei's understanding and support for him.

Feng Lixue's wife is engaged in agricultural scientific research services at the Beijing Academy of Agriculture and Forestry. "In addition to going to work every day, she also has to take care of children under the age of 3 and an elderly mother."

"When my wife had her birthday last year, I could only express my love with a bunch of dried branches and plums from a distance." To Feng Lixue's relief, his wife didn't care about it.

"You have helped the rural revitalization in Inner Mongolia, no obstacles in the wind and snow; I served agricultural scientific research in Beijing and worked hard to move forward. I hope you can become more mature, stable and meaningful after the training at the grassroots level. When you return, you can understand the countryside better and love the farmers. , the sincerity of the heart will remain unchanged.”

Feng Lixue said that he has to read this passage of his wife's message in the circle of friends every day. "I always remind myself of this passage to bring happiness to the villagers, and I am also happy." (End)