The Emirates Council for Gender Balance discussed with the Ministry of International Cooperation of the Arab Republic of Egypt opportunities for cooperation between the two sides in the field of women and gender balance, in a way that contributes to achieving sustainable development goals in the two brotherly countries and countries in the region, especially the fifth goal related to gender balance. 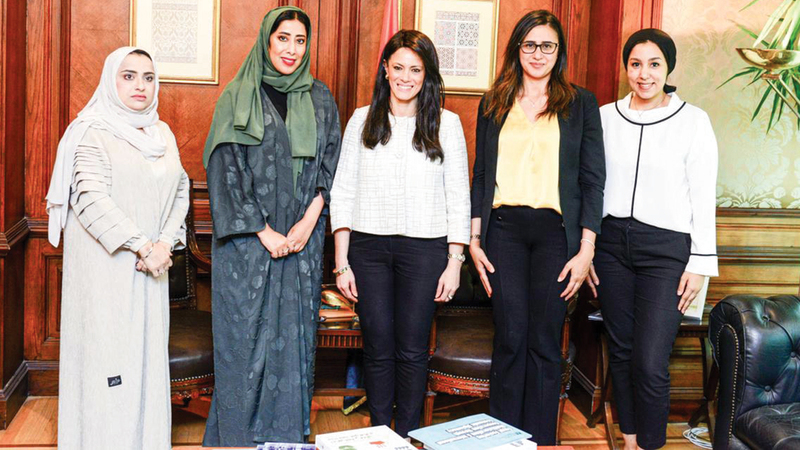 Rania Al-Mashat, Mona Al-Marri and Shamsa Saleh during the meeting in Cairo.

The Emirates Council for Gender Balance discussed with the Ministry of International Cooperation of the Arab Republic of Egypt opportunities for cooperation between the two sides in the field of women and gender balance, in a way that contributes to achieving sustainable development goals in the two brotherly countries and countries in the region, especially the fifth goal related to gender balance and the empowerment of all women.

This came during the reception of the Minister of International Cooperation in Egypt, Dr. Rania Al-Mashat, Vice-President of the Emirates Council for Gender Balance, Mona Ghanem Al-Marri, the Secretary-General of the Council, Shamsa Saleh, and the Director of the Dubai Press Club, Maitha Buhumaid.

Mona Al-Marri confirmed that the meeting was very fruitful, as the efforts made by Egypt to enhance its competitiveness in the field of women and reduce the gender gap were recognized, adding that there are many future opportunities and projects that can be cooperated on, and that move relations to the highest levels, especially The two countries share a common vision to support women and enhance their role in various fields, in continuation of the process of supporting them over the past years.

She praised the achievements and successes of Egyptian women over the years in various fields locally, regionally and globally, which constitutes a strong basis for enhancing the role of women and equal opportunities for both genders in all sectors and job positions as a major focus of Egypt's Vision 2030 that supports the sustainable development goals.

Mona Al Marri explained that the Emirates Council for Gender Balance, headed by the consort of His Highness Sheikh Mansour bin Zayed Al Nahyan, Deputy Prime Minister and Minister of Presidential Affairs, Her Highness Sheikha Manal bint Mohammed bin Rashid Al Maktoum, worked to achieve its goals in cooperation and partnership with all federal and local authorities in The UAE with building effective partnerships with international organizations. These efforts included reviewing laws and legislations related to women and gender balance, in addition to cooperating with the private sector to consolidate the gender-supportive environment in its various institutions. These efforts contributed to achieving a qualitative leap in the UAE’s ranking with reports and indicators. Globalism.

She added that the council is continuing its efforts to achieve the vision and directives of the wise leadership for gender balance as a priority in the next 50-year plan through various projects and initiatives included in the UAE Gender Balance Strategy 2022-2026, announced last March by His Highness Sheikh Mohammed bin Rashid Al Maktoum, Deputy The President, Prime Minister and Ruler of Dubai, and includes four main pillars: economic participation, entrepreneurship, financial inclusion, well-being and quality of life, protection, leadership and global partnerships.

Mona Al-Marri said, "There are broad prospects for cooperation with Egypt in the issue of gender balance and support for women within the framework of the priority of this file within the future vision of the leadership and governments of the two brotherly countries," considering that cooperation opportunities will enhance the strategic partnership, exchange knowledge and experiences, and advance sustainable development goals, not in the two countries. Only, but in all countries of the region, pointing out that gender balance in the economic and political fields means a more balanced and cohesive society.

For her part, Dr. Rania Al-Mashat affirmed the continuation of efforts at the level of joint cooperation, with the aim of implementing the directives of the political leadership in the two countries, aimed at maximizing the benefit from the great potential and the diverse resources available in Egypt and the UAE to serve the two brotherly peoples, achieve common interests and contribute to strengthening the status of the two countries at both levels. regional and international.

She said that the Corona pandemic did not impede the development efforts being made in Egypt, including the pursuit of the fifth goal of the sustainable development goals related to achieving gender equality, as the pace of adopting policies supporting the empowerment of women was accelerated through 21 measures during the pandemic, which granted her First place at the level of policies to support women during the pandemic at the level of the Middle East and West Asia in the report of the United Nations and the United Nations Development Program, noting Egypt's efforts to empower women as an active element in society, and able to participate effectively in achieving development.

Dr. Rania explained that the Ministry of International Cooperation launched accelerators to bridge the gender gap in cooperation with the World Economic Forum and the National Council for Women, with the aim of bridging the gender gap in the fields of work in partnership between the public and private sectors and civil society, thus creating a better future for women in the labor market.

"The efforts of the Emirates Council for Gender Balance have contributed to achieving a qualitative leap in the UAE's ranking in international reports and indicators."

The pandemic did not impede development efforts in Egypt, including the pursuit of the fifth goal of the sustainable development goals related to gender equality.