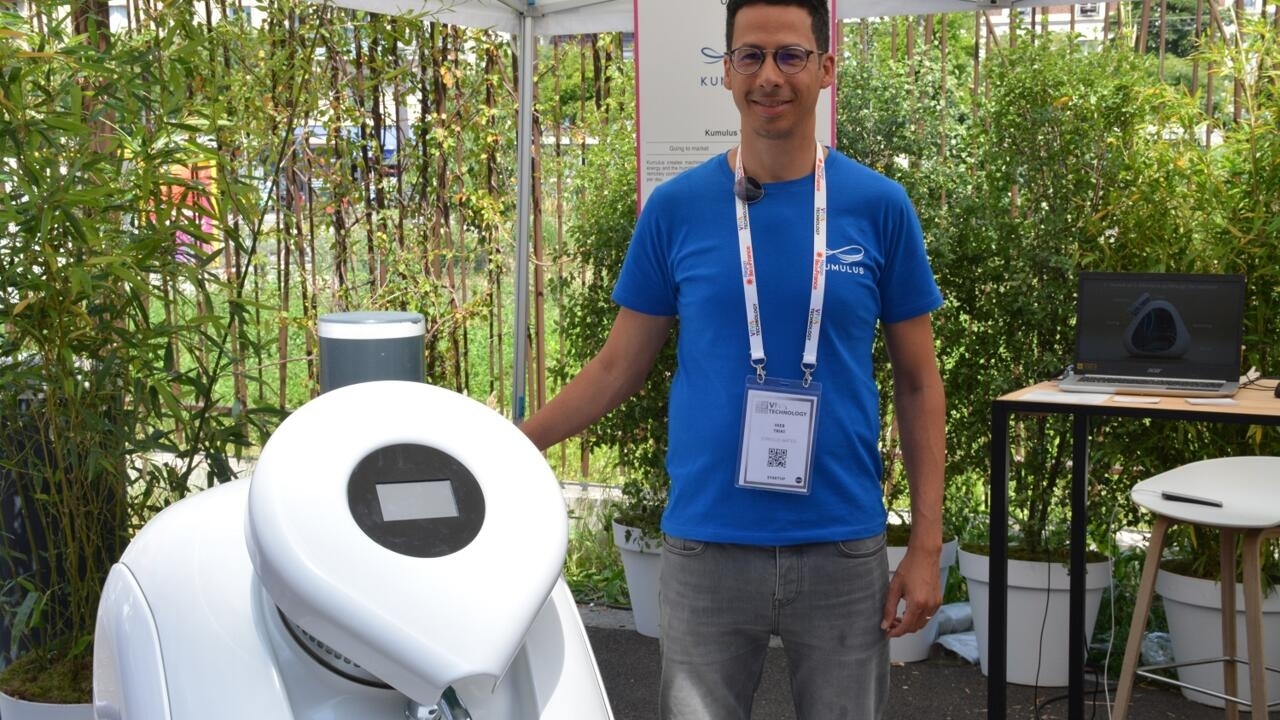 Transforming air into water, the futuristic invention of Tunisian engineers

When entering the Vivatech show on June 17, 2022, Porte de Versailles in Paris, visitors immediately come across a funny object evoking a robot healer straight out of Star Wars or Wall-E, the famous Pixar film .

An egg-shaped, all white, with a tap and a small touch screen.

On top, a sort of small chimney, which let out a slight hum.

All smiles, Iheb Triki, one of the two founders of the Kumulus company, waits next to his creation.

It is a dew generator: an object capable of transforming dry air into water.

It is a succession of filters, specifies Iheb.

The air is filtered against particles in the first place.

This is where the dew phenomenon takes place.

The air then continues on its way.

The water that has been created via the dew phenomenon passes through a filter against particles and a second filter against bacteria before being mineralized and then stored.

The design of the machine is inspired by antique jars.

The electrical appliance is largely made from easily recyclable materials: stainless steel and aluminium.

The tank fills up continuously. In Dubai, the machine would produce 40 to 50 liters on average per day.

A unit of this innovation therefore makes it possible to supply water, depending on the location, to around 10 or even 30 people.

So many individuals who will therefore consume much less plastic, who will have their own source of water even in the middle of the desert, while avoiding the transport of plastic bottles.

The price is however not communicated, because the machine cannot be bought, it is rented.

And so, suddenly, when we give you the machine, you pay us for the service behind it, filter change, maintenance, monitoring, via our web App, but above all the tests we do on a daily basis and monthly also for water quality.

According to the company, the price per liter is 10 to 20% cheaper than bottled

This invention is therefore not so much for individuals but for groups.

We tested it next to a chemical plant.

Pollution is not visible, but it is in the air.

The water was good.

The reason is simple: there are enough filters, but in addition the phenomenon of condensation means that certain particles, in particular heavy metals, are naturally filtered

With this machine with a design inspired by antique jars, Kumulus hopes, despite its subscription system, to attract customers from the African continent and the Middle East.

► If you have any questions or suggestions, you can write to us at