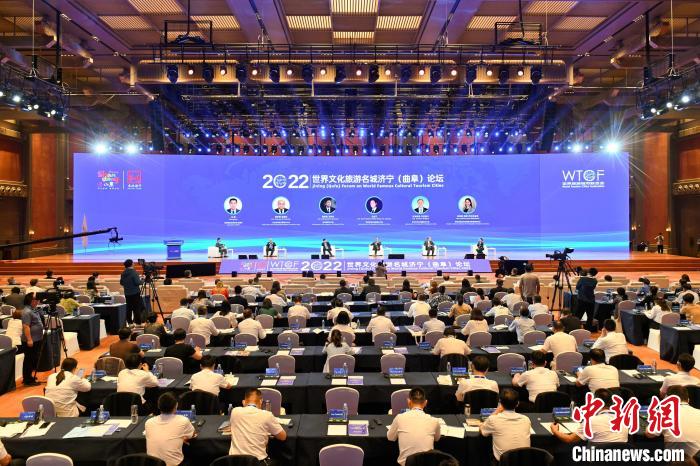 The mayor of Izmir, Turkey, an international member city of the Federation, Mustafa Donk Sawyer, said in a video speech that as a Mediterranean port city, the city has nurtured many cultures and provided many things from ancient times to the present. A case of cultural coexistence.

He believes that "tourism will be concentrated in cities with cultural tourism as the main attraction" is a new tourism trend after the epidemic, and this forum is of great significance to promoting the sustainable development of the global tourism industry.

According to Wei Xiaoan, chief expert of the World Tourism Cities Federation, the epidemic that has lasted for three years is still raging, which directly affects the recovery of world tourism.

However, the demand for cultural tourism in the world has not disappeared, on the contrary, it has rebounded more and more, and the development of tourists and cultural tourism cities is facing more business opportunities.

He suggested that it is necessary to establish a peaceful and safe tourism brand, rationalize convenient and efficient transportation, maintain a cultural atmosphere, create urban vitality, and resume business and production on demand.

"Tourism is a bridge for spreading civilization, exchanging culture and enhancing friendship. It is an important driving force for economic development and a way of self-cultivation." Sun Jiye, deputy governor of the Shandong Provincial People's Government, said that the province has included the boutique tourism industry in the transformation of new and old kinetic energy. The "Top Ten" industries have been vigorously promoted, and they are committed to building a global tourism demonstration province, a highland for the integrated development of culture and tourism, and an internationally renowned cultural tourism destination, and have achieved fruitful results.

At present, Shandong has 10 national-level historical and cultural cities, and has built ten cultural tourism destinations such as the Holy Land of the East, the Wonderland Coast, the Old Capital of Qi Kingdom, the Hometown of Water Margin, and Yimeng for Family Love. It is committed to promoting Qingdao, Jinan, Tai'an, Qufu, Penglai And so on to create an international tourist city.

Sun Jiye said that with the help of this forum, he sincerely hoped that experts and scholars would help Shandong build a group of world-class cultural tourism cities; he hoped to strengthen exchanges and cooperation with WTCF member cities, the countries where they are located, and domestic and foreign tourism organizations to achieve win-win development.

Jining, Shandong, where the event was held, is known as "the hometown of Confucius and Mencius, the capital of canals, and cultural Jining". It is a national civilized city, a national sanitary city, an excellent tourist city in China, and an international wetland city.

Yu Yongsheng, deputy secretary of Jining Municipal Party Committee and mayor, said that this forum is not only a cultural and tourism event where ideas collide, but also builds a bridge for cultural mutual learning. The city will take this opportunity to earnestly learn from new ideas and concepts. , to promote the results of the forum to take the lead in landing in Jining.

On the same day, the conference released the "Declaration of Jining Nishan, a World Famous Cultural Tourism City" to the world, advocating the tourism city to promote the high-quality utilization of cultural resources, explore new cultural expression and dissemination methods, give full play to the strategic value of cultural tourism, and dig deep into the unique characteristics of each other. To promote regional cultural tourism, learn from scientific and effective experience to promote cultural tourism innovation, enhance the competitiveness of the cultural tourism industry with cities as the main body, promote the integration of resident culture and urban culture, and strengthen exchanges and cooperation between world tourism and cultural cities.