The hot summer comes when the lotus wakes up in Beijing

China News Service, Beijing, June 22 (Xu Jing) The hot summer is approaching, and the cicadas are singing. At 17:14 on June 21, the 2022 summer solstice will come, and the midsummer will begin. At present, summer is in full swing in Beijing's parks and national botanical gardens. Layers of lotus leaves have risen on the lake surface, lotus flowers are budding, and water lilies are blooming one a 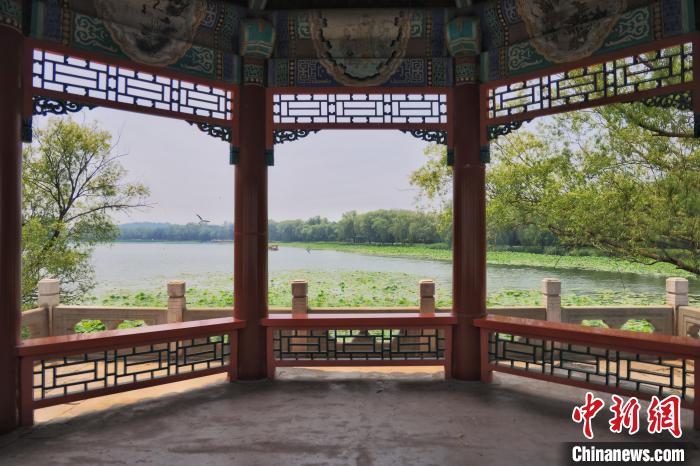 At present, summer is in full swing in Beijing's parks and national botanical gardens. Layers of lotus leaves have risen on the lake surface, lotus flowers are budding, and water lilies are blooming one after another.

The reporter learned from the Beijing Park Management Center that at present, most of the lotus flowers in Beijing Park are gradually entering the first flowering period, and it is expected that they will reach their full bloom in early July.

On the 21st, the center released a lotus viewing guide in Beijing's parks and national botanical gardens. From the prestigious Summer Palace Kunming Lake to the National Botanical Garden in Beijing this spring, there are more than 20 lotus viewing points in more than ten parks with different views. , waiting for tourists.

The picture shows the Summer Palace this summer.

It is expected that in mid-to-late July, Baiyangdian red lotus species such as Zaojiantang Lake and Harmony Garden along the Xidi will bloom one after another.

In mid-July, the space lotus and red lotus near the south gate of Beihai Park will be in full bloom.

According to reports, Beihai Park has a long history of raising and nurturing lotus. It started from the "White Lotus Pool" in the Jin Dynasty, developed in the "Royal Garden Lotus Fragrance" in the Qing Dynasty, and flourished in today's "Lotus Fragrance Yiyuan".

The beautiful scenery of the Lotus Yingbai Pagoda has long been an important part of Beihai culture, and it is also a beautiful memory in the hearts of Beijing people.

The lotus flowers in Taoranting Park will also be in full bloom in July.

When the lotus flowers are in full bloom, the green lotus leaves and the delicate lotus flowers rise and fall, and against the backdrop of the ancient buildings, they seem to play the musical notes.

Sitting on the shore, the mind is calm, the breeze is coming, and the heart is relaxed and happy.

From July to August, in the Lotus Ferry Scenic Spot of Zizhuyuan Park, Zhushen Hejing and other places, you can not only take a close-up view of the lotus on the water platform of the park, but also take a boat on the lake in the hot summer to watch the lotus pose and appreciate the taste. Mandarin ducks play in the water.

At the same time, the lotus in the small lake in the cherry blossom garden in the northwest of Yuyuantan Park also entered its full bloom period.

The concubine dance has an early lotus stage, and the flower color is white with pink, fresh and elegant.

Among them, the big dance concubine's flower head is slightly curved, like a woman's dancing sleeves; the small dance concubine is straight and straight, beautiful and lovely.

Red lotus is the most numerous and strongest variety, with pink flowers all over the lotus pond.

Da Ziyu is a late-flowering variety with double petals, pink color, and few in number.

A view of the lotus in one place with different atmospheres

From July to early August, in the Chengjing Lake (South Lake) of the National Botanical Garden (North Garden), pink lotus flowers are slender, green lotus leaves are layered, and the melodious sound of cicadas is endless.

The breeze blowing is refreshing; in Chengming Lake (North Lake), the lake reflects the continuous mountain peaks, the colorful water lilies rest in the lake, the trees on the shore are lush, and the crisp insects and birds are calling one after another.

An ecological picture scroll surrounded by mountains and rivers with endless greenery comes into view, showing the endless charm of nature.

The picture shows the North Garden of the National Botanical Garden this summer.

At present, the water lilies in Jingcui Lake, Yunqinzhai, Tingxuexuan, Glasses Lake and other places in Xiangshan Park are blooming one after another, and it is expected to last until early and mid-August. At times, various colors are intertwined, and they are matched with ring corridors and rockeries to form a scene.

The park specially reminds that the lotus pond on the east side of Changguan Building is also one of the best places to appreciate lotus in the park. There are many varieties of Heilongjiang red lotus, large sprinkle brocade, Colorado, etc., with different shapes and blooming flowers.

In Zhongshan Park, the small water lilies planted on both sides of the Tingyu Bridge are bright and green, and the flowers are small and delicate, floating on the water waves together, forming a summer beauty with the wicker and stone bridges on the shore; this summer, Jingshan Park At the south gate, a large blue-and-white porcelain vat will be placed with potted water lilies, creating a unique summer lotus-appreciating atmosphere.