The UAE has a rich and diverse heritage that reflects its nature, which is divided into marine, mountainous, Bedouin and agricultural environments, each with its own distinctive features, traditional professions and lifestyle. The marine heritage is a major part of the heritage of the Emirates, as the sea has long been an essential component of the sea 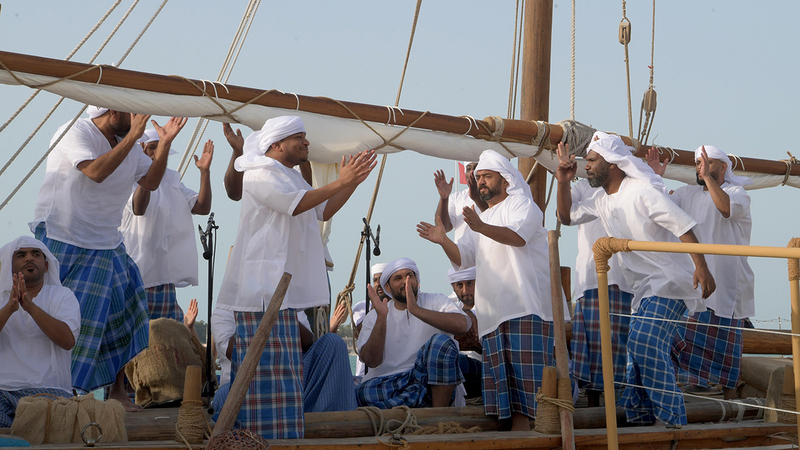 Participates in the UAE delegation at the Smithsonian Festival

The UAE has a rich and diverse heritage that reflects its nature, which is divided into marine, mountainous, Bedouin and agricultural environments, each with its own distinctive features, traditional professions and lifestyle.

The marine heritage represents a major part of the heritage of the Emirates, as the sea has long formed an essential component in the nature of the lives of the people of the Emirates, and the Gulf region as a whole, especially that a large part of them worked in the crafts of fishing and diving for pearling, in addition to the traditional industries that were associated with these two professions. Such as the manufacture of ships and traditional fishing boats, the manufacture of nets and gargoyles, and the profession of tawashah that was associated with the pearl trade, as well as the marine environment had its popular arts, most notably the art of the nihm, which is a type of songs performed by a person in the crew of fishing and diving vessels called “Al-Nahham”, according to Al-Nahham Emirati Juma Yousef Al-Junaibi.

Al-Junaibi explained to "Emirates Al-Youm" that the ships during the pearl diving trips had to be among their crew, "Nahham", who is one of the members of the work team. Pointing out that the poems of the insatiable aim to inspire enthusiasm in the souls of the sailors and encourage them to continue their hard work, and the performer of this art contributes to controlling the rhythm of work on the ship or "loader".

Al-Junaibi expressed his happiness and pride in being chosen among a delegation of 80 artists and creators from the UAE to represent the country at the Smithsonian Folklore Festival, which is one of the most prominent artistic and cultural events in the world, which is organized annually in the American capital, Washington, and its activities continue this year from 23 to 27 This year, and from the 30th of this month to the fourth of next July, the event will be hosted by the UAE only in its session this year, with the full support of the Ministry of Culture and Youth and in partnership with the Ministry of Foreign Affairs and International Cooperation and the UAE Embassy in the United States of America.

He pointed out that he learned "Al-Nahma" from his father and grandfather, and was associated with it, and he hopes that this and other heritage arts will remain present among future generations, adding: "In order to preserve the Nahma as an Emirati and Gulf cultural heritage, we presented a project to the responsible authorities to train young people on it and pass it on to them." In an interesting way, so that it remains present in their hearts and in turn transmits it to the next generations,” stressing the importance of preserving and transmitting the heritage without change and adhering to its identity and essence so that it does not become weak and become emaciated and devoid of content.

Al-Junaibi continued: "In the past, there was insufficient awareness and keenness in codifying, transmitting and preserving the marine lyrical heritage, as work in this field was based on individual initiatives and judgments that lacked a clear institutional framework. The work to preserve the heritage is more disciplined and diligent, which is reflected in the many festivals and heritage events that are held in the country, and the multiplicity of foreign and international participations and the remarkable success they achieve.”

Al-Nahham Emirati Juma Yousef Al-Junaibi said that his participation in the Smithsonian Festival of Folklore in the United States of America represents an important opportunity to introduce the American public to the heritage of the Emirates, and what is distinguished by it, as arts in all its forms have a distinct place in the popular and cultural heritage of the country and the region, especially the art of « "Insatiable", which is unfamiliar to the American and Western audiences in general.

The UAE is the guest of this year's edition of the festival, which is one of the most prominent artistic and cultural events in the world.

"The poems of the insatiable were aimed at instilling enthusiasm in the souls of the sailors, and the performer of this art was contributing to controlling the rhythm of work on the ship."

“I learned Al-Nahma from my father and grandfather, and I was associated with it, and I hope that this art and other arts of heritage will remain present among future generations.”

Creative people from the UAE are participating in the festival.