[Report file] Lim Yun-chan, who is upset after winning, "The moment of satisfaction, danger"

A new 'star' was born at the Van Cliburn Competition, which closed on the 19th at the Base Performance Hall in Fort Worth, USA. This is Yunchan Lim, an 18-year-old Korean pianist. 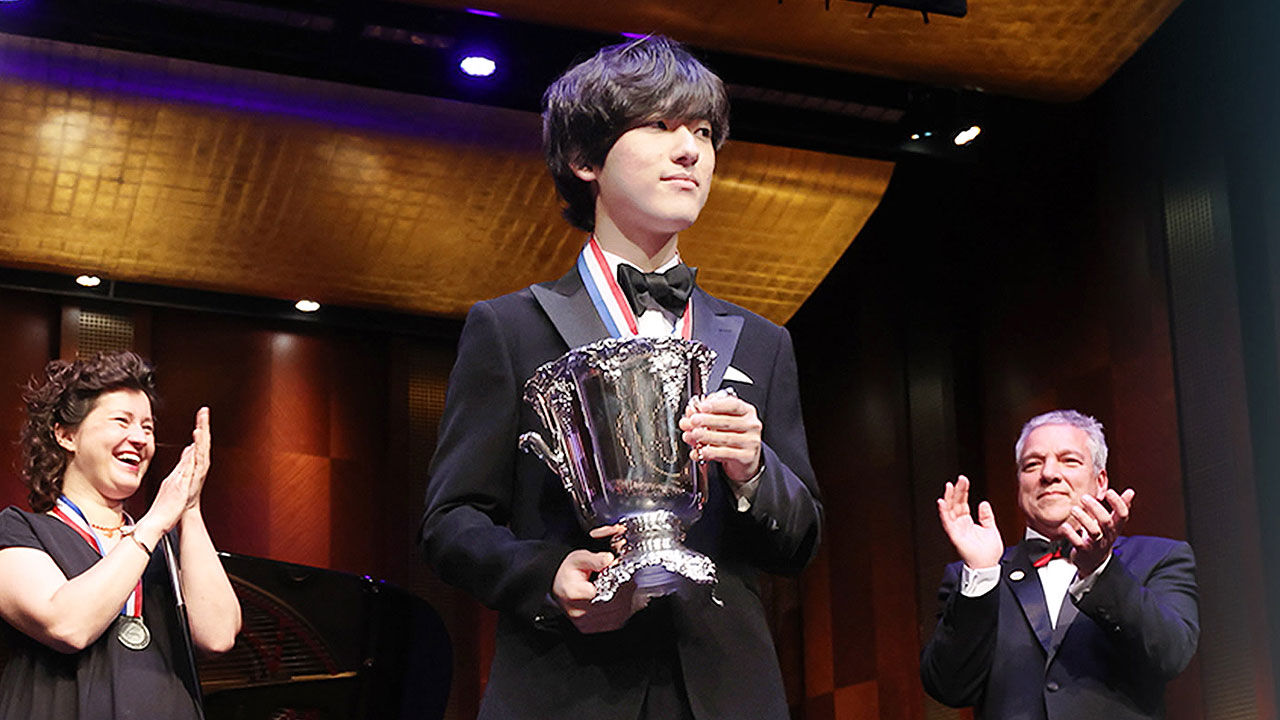 A new 'star' was born at the Van Cliburn Competition, which closed on the 19th (Korean time) at the Bass Performance Hall in Fort Worth, USA.

This is Yunchan Lim, an 18-year-old Korean pianist.

He was mentioned as a strong contender for the championship by focusing his attention on his bold and outstanding performances in each round.

In particular, Rachmaninoff's Piano Concerto No. 3, performed in the final round, left a strong impression with an overwhelming performance.

The Van Cliburn Competition is one of the major competitions dreamed of by pianists around the world.

It has been held since 1962 to commemorate the American pianist Van Cliburn, who won the 1st Tchaikovsky Competition during the Cold War.

It is held every four years, and the roster of past winners includes greats like Radu Lupu.

The 16th competition was postponed by a year due to Corona, and it was held in 2022 to celebrate the 60th anniversary of the contest.

The name Lim Yun-chan was already famous among those in the domestic music industry.

He has been regarded as a next-generation prospect since he became the youngest winner of the 2019 Yoon Sang International Music Competition at the age of 15.

He has often performed solo, concert, and chamber music in Korea, and his technical perfection is already at a 'different level' level, and he has fascinated the audience by clearly revealing his musical subjectivity.

Born in 2004, he graduated from Yewon Middle School and immediately entered Korea National University of Arts, where he has been studying pianist Minsu Son.

There are many people who play well, but Yunchan Lim was special among them.

Last year, he presented all 12 songs of the list of 'Songs of Transcendental Skills' as a recital program.

The word 'tension from the other world' is used a lot these days, right?

I would say that it is a practice song that requires extremely difficult technical skills, just like in the rest of the world.

He played songs that were notoriously difficult for a month without a break, and he cooked to his heart's content without any technical difficulties.

In the passionate part, he exploded and exploded, and in the slow part, he lost all his strength and became melancholy to the fullest, and then fell into deep solitude.

The level of immersion in Lim Yun-chan's performance was so great that even those who watched it were immersed in it.

Yunchan Lim brought out all 12 of the Transcendental Skills Practice Songs on this list as a semi-final program.

It's the perseverance that comes up with such a difficult song in a competition contest where the rankings are determined and eliminated, and even the slightest mistake is fatal.

However, Yunchan Lim's choice was successful.

In fact, people who watch competitions, even non-judges, usually make up their own scores in their minds.

I even compare it to other people's performances.

But his performance completely forgot that this was a contest and just took my breath away and made me fall in love with the music.

It had the magical power to turn not only the on-site audience but also those who watched it on YouTube as spectators of the 'Lim Yun-Chan Recital' rather than the contest.

In the finals, he showed that magic again.

Clara This webcast host, pianist Elisabeth Lo, as soon as she finished playing Rachmaninoff's Piano Concerto No. 3, said, "Yunchan Lim was like a wizard," and "played only once in his life."

If you look at the comments on this video on YouTube right now, it's full of praise from music fans all over the world that it's a performance that will go down in history.

His feelings about winning "The most disturbing heart this year"

I didn't originally work on Sunday, but I thought I would be writing an article for the Van Cliburn Competition, so I switched my holiday shift with someone else in advance.

Indeed, Yunchan Lim won the championship, and immediately after that, I became busy.

First, I had to write an article, a report for the daytime news, and an 8 news report, which is the main news.

I needed an interview with Lim Yoon-chan, the person involved.

We had already talked about doing a video interview, but things were not going well, so we received a video sent to us by an official at the scene asking questions for us.

Curious what he was talking about, I opened the video that arrived.

"My heart is very heavy, disturbed, and worried. I hoped to deepen through this contest, so if my music reaches the hearts of the audience, I am satisfied with that."

Is this how the person who just won the gold medal felt?

“I got on the plane without expecting to win at all, so I’m a little embarrassed and heavy right now. I kept talking with my teacher (pianist Min-soo Son), but through this contest, I don’t know how to play the piano well, but how deep the music can be. Because that was the goal of my contest… and I am not yet ready, and I am a very lacking musician, but to receive such a ridiculous award, I am very, very disturbed this year. I have a lot of trouble.”

Later, I had the opportunity to talk directly to Lim Yun-chan, even briefly.

I've already seen the interview video, but I wanted to ask you a question.

Why did you go to the contest?

To deepen the music, I want to share the music

Q. Have you never expected to win?

A. Throughout the entire process of the competition, I never once thought that I could win.

Q. How do you feel when you are called the winner?

A. My heart is heavy and I have been thinking a lot about what to do next.

Q Still, aren't you happy that you won?

A I've never been happy for a moment.

Q. So, what did the Van Cliburn Competition mean to you?

What kind of heart did you come to?

A. I just wanted my music to deepen, and I came out with the desire to share my music as many people from all over the world watch the competition.

So I think I got into it.

Q What is the most memorable round?

A. I guess I played the final Rachmaninov.

After the performance, I have no more repertoire left, so the feeling of relief is the most memorable...

“The moment you are satisfied with yourself, you become dangerous.”

Q: Why did you select all of the Transcendental Skills practice songs in the semifinals?

Is it a song that doesn't play well in competitions?

A Actually, the fundamental reason was that other people didn't do it.

And, since the Liszt Transcendence Training Song is a masterpiece of Liszt's life that Liszt made through revisions and revisions from his junior high school age to his final years of writing the b minor sonata, I wanted to play this song in the semi-finals as a 60-minute program. .

A. I am not satisfied with the stage.

Q. Still, if this is enough, what round do you want me to do well?

A. I think it becomes dangerous at such a moment.

You can't always be satisfied.

Q. Please tell us about your future plans.

(*It is said that related events and programs continue even after the Van Cliburn Competition is over. Hearing from the representative of the agency, they say that they have not heard the exact details yet. They said that they have not yet confirmed the return date.) Just keep going to school, and in another interview, Goldberg I said that I would do a variation, but if I get the chance, I am willing to try other songs as well.

Q You also mentioned that the music should be deep. What is your ideal player image?

A. From a young age, I had a strong image of a pianist who could play everything from baroque to modern music.

Being able to play all genres well is what I think of as an ideal performer.

Q When the winners were announced, the people sitting next to you were very happy, are you from the host family?

(Yes) How did you prepare for the competition while staying at that house?

A. Actually, I practiced every night and until dawn, so I noticed a lot.

But the host family made me feel so comfortable that they didn't care at all, and they made food in between, and they did everything, so I think they are the best host family in the world.

I think I met you really well.

(*The organizers of the Cliburn Competition say that they will send a Steinway piano of the same specification to all host families for practice. In another interview, Yunchan Lim stated that he practiced until 4 am.)

Actually, there were a lot of things I wanted to ask, but I decided to slowly ask the rest after returning to Korea.

In another interview, he said, 'I want to live in the mountains and play only the piano'.

He also talked about wanting to run out of repertoire in this world.

When he wins, the world is excited about 'the birth of a new star', but he is not engulfed in excitement and is seriously thinking about his music life.

Watching the broadcast of the awards ceremony, I thought that he didn't show a broad smile, he was just smiling.

Now I think I can understand.

He went on to compete, and he never thought for a moment when he won the award.

It's disappointing to receive an unexpected award.

Perhaps because he is such a performer, he was able to show a special performance by immersing himself in music like that throughout the competition.

All of Yunchan Lim's wonderful smiles that I saw at this competition came out while he was playing and immersed in music.

We hope to see more of his wonderful smile in the future.