Timeline - Tunisia's judges and President Said.. a tense relationship since he took power

Since Tunisian President Kais Saied dismissed dozens of judges in early June 2022, the relationship between him and the judges has reached an impasse. 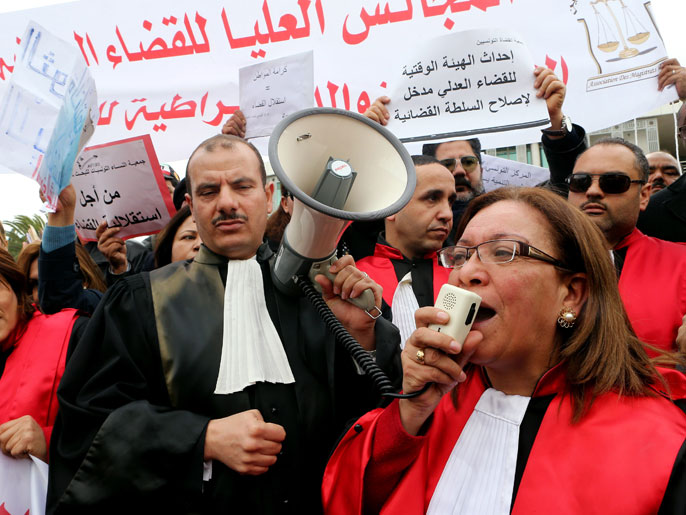 The relationship between Tunisian President Kais Saied and the judges reached a dead end after the president dismissed dozens of judges in early June 2022, accusing them of corruption and protecting terrorists, which was rejected by the Association of Judges, which said that most of the decisions were politically motivated.

Two weeks ago, the judges began a strike, while the Coordination of Judicial Structures in Tunisia decided to extend the strike for a third week, declaring its support for the initiative of judges covered by the exemption order;

Which called for a hunger strike to cancel their exemption.

- December 30, 2021: President Qais Saeed calls for the need to reform the judicial system, because the development of the law relating to the Supreme Judicial Council was the result of the intervention of a number of non-competent parties.

January 19, 2022: Qais Saeed issues a decree to "put an end to the grants and privileges" granted to members of the Supreme Judicial Council.

January 20, 2022: Tunisia's Supreme Judicial Council confirms that its members "will continue to carry out their duties regardless" of the presidential decree.

February 5, 2022: President Qais Saeed announces that the Supreme Council has become a thing of the past and pledges to prepare a decree for an alternative council.

February 6, 2022: The Supreme Judicial Council rejects Said's announcement of dissolving the Council and calls on him to stop misleading public opinion and calls on judges to defend the constitutional status of the Council.

- February 7, 2022: Tunisian police close the doors of the headquarters of the Supreme Judicial Council and prevent employees from entering it.

February 12, 2022: a presidential decree announcing the dissolution of the Supreme Judicial Council and the formation of a temporary Supreme Judicial Council, a decree that granted the head of state the right to consider the movement of judges and object to nominations for senior positions, as well as the right to dismiss any judge who "violated his duties", according to The decree.

- February 24, 2022: The Judges Association carries out a protest sit-in denouncing the targeting of the judiciary.

- April 16, 2022: The Tunisian president renews his criticism of the judiciary and expresses his surprise at the Public Prosecution's lack of action regarding what he called a "coup attempt", against the background of the frozen parliament holding a public session via video communication networks, considering that a number of judges postponed the consideration of some Files without specifying a time is the assassination of justice.

May 30, 2022: President Saeed stresses, during his meeting with the Ministers of Justice and Interior, that the country can only be purified when laws are applied in the palaces of justice without any influence, as he put it.

June 1, 2022: President Saeed strongly criticizes - during his opening of the cabinet meeting - what he described as manifestations of corruption, shortcomings and shortcomings that the judiciary suffers from, and accuses a number of judges of involvement in corruption and covering up the corrupt.

- June 4, 2022: The judicial structures in Tunisia decide to carry out a strike in all Tunisian courts in protest of the Tunisian President's decision to dismiss 57 judges through a presidential decree.

June 11, 2022: The Coordination of Judicial Structures in Tunisia decides to extend the suspension of work of all judicial, administrative and financial courts and judicial institutions for another week, in protest against the decisions of Tunisian President Kais Saied to dismiss more than 50 judges, and not to reverse the exemption decisions and cancel Decree No. 35.

- June 18, 2022: The Coordination of Judicial Structures approves extending the judges' strike for a week with support for a hunger strike that will be carried out by a number of dismissed judges, in addition to the implementation of a day of rage for judges.