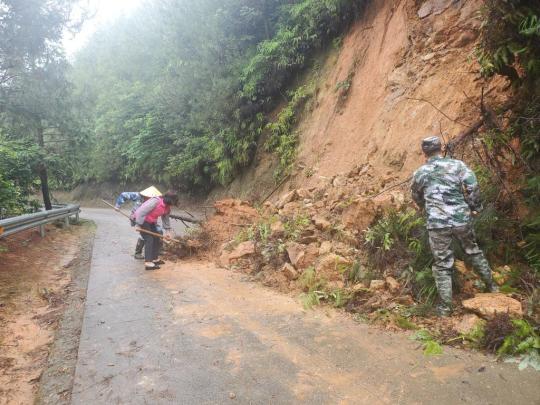 Question : Heavy rainfall in the south causes over-alarm floods to improve emergency response in many places

On June 13, the southern part of my country faced the process of heavy rainfall again. The Ministry of Water Resources launched a flood defense level IV emergency response at 12:00 on the 12th in response to the rain conditions in the seven southern provinces.

Relevant provinces in the south launched emergency defense responses based on changes in rain conditions, and quickly took measures to deal with the heavy rainfall process.

There were heavy rains to heavy rains and local heavy rains in the northern Guangxi, central Guangxi and coastal areas of Guangxi.

Due to continuous rainfall, 39 stations of 33 rivers including Yujiang, Nanliujiang, Hejiang and the entire middle and lower reaches of Xijiang in Guangxi experienced floods exceeding the warning level.

In the past few days, Nanping, Sanming, Longyan and other places in Fujian have also experienced heavy rainfall.

On the 12th, the Fujian Provincial Flood Control and Drought Relief Headquarters upgraded the emergency response to rainstorms to level III, and two rivers including Youxi and Futunxi experienced excessive flooding.

The torrential rain has caused disasters in many parts of Fujian to varying degrees. Geological disasters such as mountain torrents and mudslides have occurred in some areas, and roads have slipped and farmland has been flooded in the affected rural areas.

In the face of torrential rain, all parts of Fujian have done a good job in flood control and rainstorm prevention.

At 8:00 on the 12th, Nanping City launched a level II emergency response to prevent rainstorms and floods, and took measures such as suspension of classes in primary and secondary schools and suspension of outdoor construction sites to deal with this round of heavy rainfall.

On June 11, emergency repair personnel from the Tiandeng Power Supply Bureau of China Southern Power Grid took a kayak to Sanzhoutun, Hongkui Village, Tiandeng Town, Tiandeng County to check the damage of power supply equipment and prepare for the restoration of power supply.

"The place where the 236 National Highway passes the village has collapsed, causing water accumulation and blocking traffic. Please help quickly." After the message was sent to the group on the 12th, Li Lin, secretary of the Party branch of Tongluo Village, Changpu Township, Xunwu County, Ganzhou City, Jiangxi Province, held it. The dredging tools rushed into the heavy rain.

National Highway 236 is a local traffic artery. Once blocked for a long time, there may be emergencies such as obstruction of the masses to seek medical treatment.

Five excavators and other construction vehicles were urgently dispatched to carry out on-site operations.

Pulling up the cordon to prevent vehicles from taking risks, participating in clearing landslides and speeding up the road... After more than three hours of intense repairs in waist-deep water, Li Lin and other cadres finally cleared the road in the afternoon.

In some flood-stricken areas in Guangxi, the electricity consumption of 621,500 users was affected.

The company has invested a total of 3,242 personnel, 1,111 vehicles, and 80 generators to carry out emergency response work such as emergency duty, equipment inspection and emergency repair of electricity.

Based on the prevention of major floods, continue to strengthen prevention

In response to this round of heavy rainfall, Jiangxi actively organized personnel to strengthen the inspection and monitoring of the banks of the Ganjiang River, closely monitor the rain and flood conditions, and strengthen flood control on duty.

Since June 2, the Guangxi financial department has urgently allocated 20 million yuan of disaster relief funds at the same level for basic living assistance of the disaster-stricken people.

The Emergency Management Department of the Autonomous Region, together with the Grain and Reserve Department, urgently allocated 12,000 pieces of disaster relief materials such as tents, folding beds, blankets and other disaster relief reserves at the level of the autonomous region to Guilin, Liuzhou, Yulin and other severely affected areas, and urgently purchased mineral water, instant noodles, flashlights and other living supplies. More than 300,000 pieces of necessities have been sent to the affected areas.

On the 13th, the Central Meteorological Observatory issued a yellow rainstorm warning.

Experts reminded that the continuous rainfall has caused the soil moisture to reach or become saturated in some areas, and the risk of geological disasters such as landslides, mudslides, and landslides is high.

The water level of rivers is generally high, and continuous rainfall will cause urban and rural waterlogging, mountain torrents, floods in small and medium-sized rivers, and geological disasters. Detailed work.