Iran and Venezuela strike 20-year deal, ally against US

Iran and Venezuela, two major oil-producing countries hit by heavy US sanctions, signed a 20-year cooperation agreement on Saturday. Many… 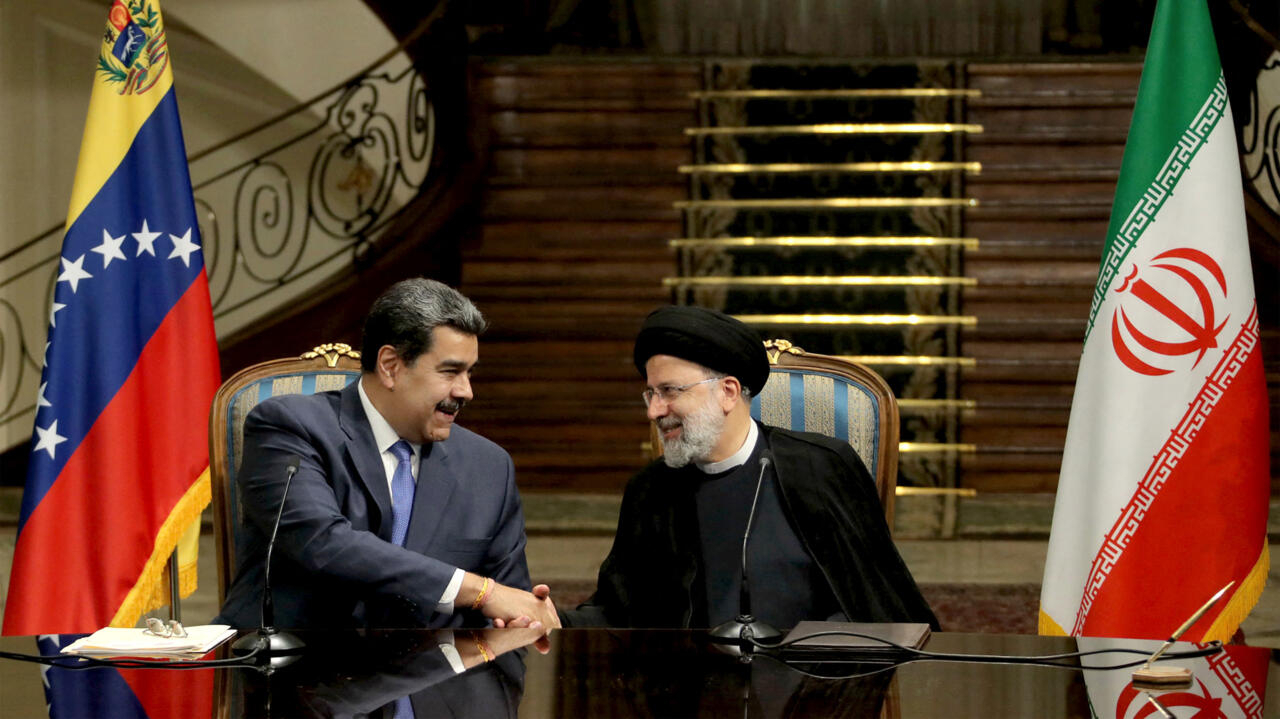 Iran and Venezuela, two oil countries under US sanctions, signed a 20-year cooperation agreement on Saturday to strengthen their alliance against the United States, their common adversary.

"The signing of a 20-year strategic cooperation agreement (...) shows the determination of the senior officials of the two countries to develop bilateral relations in various fields," said President Ebrahim Raisi in a statement to the press with his Venezuelan counterpart Nicolas Maduro, visiting the country.

This strategic document was signed by the foreign ministers then the ministers concerned signed cooperation agreements in the political, economic, tourism, oil and petrochemical fields, detailed the official Iranian agency Irna.

>> To read also: Iranian nuclear: from diplomatic hope to a new escalation

Iranian Supreme Leader Ayatollah Ali Khamenei, who received the Venezuelan President at his residence in Tehran, stressed that "the successful experience of both countries has shown that resistance is the only way to face American pressure".

"Your resistance and that of the Venezuelan people is very valuable because it enhances the dignity of the country. Today the American vision of Venezuela is fundamentally different from that of the past," he said in a statement issued by his office.

Ali Khamenei also praised the "close relations" with Venezuela, saying that his country is ready "to take risks to help its friends when they are in danger".

Nicolas Maduro, who arrived in Iran on Friday, welcomed in his statement to the press "the unwavering friendship between the two countries".

"We have important cooperation projects in the fields of defence, energy, oil, gas, refineries and the petrochemical sector", he declared, also mentioning "the financial cooperation with the Iranian-Venezuelan National Development Bank".

President Maduro also mentioned "joint plans to produce food in Venezuela and export it to Iran and the region".

In addition, Nicolas Maduro announced the inauguration on July 18 of the Tehran-Caracas flight to promote tourism between the two countries.

"Venezuela is ready to receive tourists from Iran who can enjoy the beauty of the Caribbean, the Andes and the Amazon," he said.

The two heads of state attended at the presidential palace by videoconference a ceremony for the handover "in the Gulf" to Venezuela of an Iranian-made tanker, Irna announced.

This is the second building out of four ordered by Caracas, the agency said.

"Venezuela has gone through difficult years, but the determination of the people, the leaders and the president of the country has made it possible to resist the sanctions," said the Iranian president.

"Today this country has overcome hyper-inflation and economic growth has resumed. This is a good sign that proves to everyone that resistance will work and force the enemy to retreat," he said. he adds.

In May, Iranian Oil Minister Javad Owji paid an official visit to Venezuela, the country with the largest proven crude oil reserves in the world, and met with President Maduro.

During his trip, Javad Owji had also spoken with his Venezuelan counterpart Tareck El Aissami to find ways to deal with the crippling sanctions imposed by the United States on the two countries.