[Now in Cannes] Park Chan-wook and Song Kang-ho's companion award, how great is it?

"If we had come to the same movie, it would have been difficult to receive them together. Because we do not give the director and lead awards in one movie at the same time. Shortly after winning the Cannes Film Festival, director Park Chan-wook met with reporters in the area and used the expression 'fun' about his and Song Kang-ho's shared award. 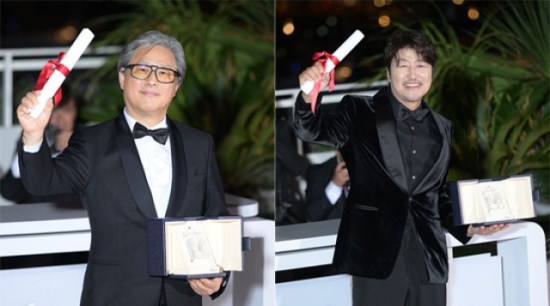 "If we had come to the same movie, it would have been difficult to receive them together. Because we do not give the director and lead awards in one movie at the same time.

Shortly after winning the Cannes Film Festival, director Park Chan-wook met with reporters in the area and used the expression 'fun' about his and Song Kang-ho's shared award.

However, winning the award together is not something that can only be regarded as an expression of 'fun'.

It is a great achievement that is difficult to achieve twice at the Cannes Film Festival for a director and actor representing Korea to win the Best Director and Actor awards for different films.

The closing ceremony of the 75th Cannes International Film Festival was held at the Lumière Theater in the Palais de Festival in Cannes, France on the afternoon of the 28th (local time).

It was a remarkable achievement for the first time since 2017 that two Korean films entered the competition category at the same time, but both films received awards, bringing joy to the Korean film industry.

Among them, the awards given to the work are the Palme d'Or, the Grand Jury Prize, the Jury's Award, and the Screenplay Award.

Film festivals do not award multiple awards for the same film.

In other words, the judges can only award one trophy for a film, even if the work is excellent and the actors perform well.

Song Kang-ho, Park Chan-wook's long-time persona, visited the film festival together when 'The Bat' was invited to the competition section of the Cannes Film Festival in 2009.

At that time, director Park Chan-wook won the Jury Prize for this film.

Song Kang-ho, who performed overwhelmingly in this film, was predicted to be nominated for an acting award, but the film received the jury award and the award for Best Actor was not made.

In 2019's 'Parasite', Song Kang-ho showed an excellent performance, but he did not make a connection with the acting award.

Instead, it shared the honor of winning the Palme d'Or at the Cannes Film Festival for the first time in the 100-year history of Korean cinema.

Park Chan-wook and Bong Joon-ho called Song Kang-ho a 'great actor' every time they received an award, giving glory to their persona, which provides influence and inspiration beyond actors in their work.

Director Bong Joon-ho also conveyed his sincerity by posing as if dedicating the award to Song Kang-ho during the photocall held after winning the Palme d'Or at the time.

Although the two directors are regular customers of the Cannes Film Festival, there was a regret that they had to share the honor of receiving the award only with their hearts when they were filming a movie with another regular customer, Kang-ho Song.

But this year was different.

Park Chan-wook went to a separate film festival for 'The Decision to Break Up' and Song Kang-ho for 'The Broker'.

'Determination to Break Up' was predicted to win awards throughout the film festival due to its overwhelming personality and workmanship, and Song Kang-ho was also mentioned as a strong candidate for the Best Actor Award.

However, there was a slight uneasiness as to whether the judges would win awards for both Korean films.

'Broker', which gave Song Kang-ho the Best Actor Award, is a human drama that depicts the process of men and women without a drop of blood meeting through a baby box and forming similar family relationships.

In this work, Song Kang-ho is Sang-hyeon, who runs a laundry and works as a broker.

As you can see from the composition of the actors, it is not a work that Song Kang-ho leads alone.

Song Kang-ho, Kang Dong-won, IU, and Bae Doo-na all play in an even proportion, so they didn't get as much attention as an actor who plays an active part in a one-top movie.

However, the judges gave Song Kang-ho the Best Actor Award.

It seems that more than half of the jury including Noomi Rapace, Rebecca Hall, and Jasmine Trinka were actors, including Vincent Langdong, the chairman of the jury.

In a meeting with reporters right after receiving the award, Song Kang-ho said, "I think it will be more meaningful because the actors are made up of a larger jury. I think I will,” he said.

He shared the honor of receiving the award with his colleagues, saying, "As you will know by seeing the work 'The Broker', I think I received it on behalf of the ensemble and the passionate performances of not only me, but also actors such as Kang Dong-won, Bae Doona, Lee Ji-eun, and Lee Joo-young."

Some say that Song Kang-ho's acting in 'Broker' is excellent, but there is also an evaluation that an atmosphere and justification that "(Song Kang-ho) is about to receive an award" seems to have been formed between the Cannes side and the jury.

The greatness of Song Kang-ho as a persona of directors representing Korean films and the fact that he was invited to the Cannes Film Festival seven times and the contribution of the film festival side seems to be an invisible plus factor.

Director Park Chan-wook and Song Kang-ho's awards for 'Separately and Together' are also a result of showing the power of Korean cinema.

In this year's competition, Korea introduced two films, 'Decision to break up' and 'The Broker'.

There is not a single Chinese or Japanese film that has won the Cannes Film Festival decades before Korea.

Across Asia, there are a total of three films, including the Iranian film 'Leila's Brothers'.

As of 2022, this is an achievement that shows how much attention is being paid to Korean films in the global film industry.

Korean films were invited to this year's film festival, not only in competition, but also in Notable Gaze, Critics' Week, Midnight Screening, and Short Film Competition.

There are two main trophies here, a brilliant achievement that can be taken with pride.