The popularity of 'Singer IU' was also confirmed in Cannes, France. At 6:45 pm on the 26th, there was an official screening of the movie 'The Broker', which was invited to the competition section of the 75th Cannes Film Festival at the Lumière Theater in Cannes. 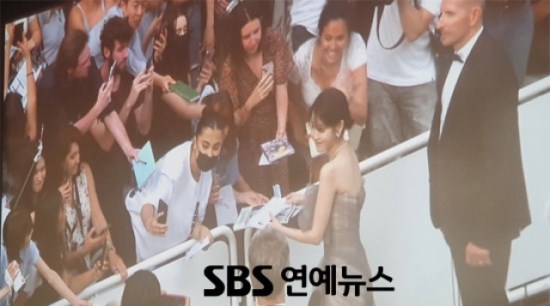 The popularity of 'Singer IU' was also confirmed in Cannes, France.

On the 26th at 6:45 pm (local time), there was an official screening of the movie 'The Broker', which was invited to the competition section of the 75th Cannes Film Festival at the Lumière Theater in Cannes.

Lee Ji-eun, who threw off IU's name for a while and took her real name on the Cannes stage, was engulfed in cheers from fans even before she stepped onto her red carpet.

As Lee Ji-eun got off her film festival car, the K-pop fans who filled the barricade in front of her red carpet chanted "Look at Me! IU!!".

Lee Ji-eun, who wore her gray tube top dress and raised hair, showed off an elegant figure that was different from her appearance on her stage.

Director Hirokazu Koreeda of 'Broker', Kang-ho Song, Dong-won Kang, Joo-young Lee, and Lee Yoo-jin, who was preparing to go up on the red carpet, together with the film house representatives, Lee Ji-eun hurried to the front of the barricade at the shouts of fans calling her.

Ji-eun Lee signed autographs by asking the names of the fans who asked for autographs with her own photos and albums.

She also actively responded to her photo requests, turning her red carpet scene into an instant fan meeting or autograph venue.

Lee Ji-eun celebrated her 11th year as a singer and actress.

The first screen entry was made with the hand of a master who represents Japan.

Best of all, she was lucky enough to make her screen debut at the Cannes Film Festival.

Lee Ji-eun's screen debut, 'The Broker', is a movie depicting the unexpected and special journey of those who have a relationship over a baby box.

IU takes on the role of Soyoung, the mother of a baby placed in a baby box.

'Broker', released two days before the closing of the film festival, received a standing ovation for about 12 minutes after the official screening.