A famous fashion designer returns to his wife, whom he divorced while performing "Umrah"!

After a 3-day divorce, the famous fashion designer Ahmed Al-Ajmi returned to the blogger, Ahlam Adel, after they became the talk of social networking sites. The story 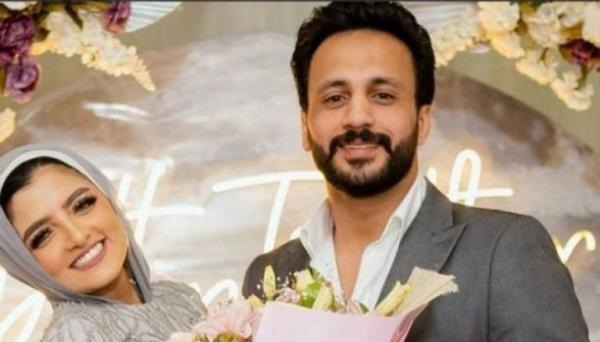 A famous fashion designer returns to his wife, whom he divorced while performing "Umrah"!

After a 3-day divorce, the famous fashion designer Ahmed Al-Ajmi returned to the blog Ahlam Adel, after they became the talk of social networking sites.

And Al-Ajmi announced, through his personal account on Instagram, the return of the duo, whose marriage only weeks had passed, and they published a picture of them, through the “Story” feature.

Al-Ajmi commented on the photo, saying, "Nurti my heart, which I got out of," after a crisis that Ahlam Adel spoke about a few days ago on her personal page on Instagram.

Ahlam was performing the rituals of Umrah, and revealed details that she was exposed to with her husband, before she canceled his follow-up on the site, and deleted the photos shared between them, while he did not do the same, and Ahlam said at the time: “I came back from Umrah, multiplied and divorced, because I brought chapels for my colleagues. Boys and Girls” before making a note “chapels are not a wine bottle.”

Ahlam's talk aroused the sympathy of many of her colleagues on social media, between supporting her and wishing her well in all the decisions she makes regarding that relationship.

Ahlam had filmed a video clip in which she was crying, as she explained, "I filmed a lot, and in the end, with tears and daylights, God suffices me and He is the best agent."

And she wished from her followers, prayers for her to be well, and that "our Lord save us from her well."

After the couple returned, some spoke on social media, astonished by their quick return, and the rapid separation that followed the marriage in a short period.