[Ten years @every struggle you] Martial arts have been with you for 66 years: the "Jianghu Life" of "Wu Chi" in Zhejiang

Editor's note: Every Chinese who works hard to live is the most beautiful struggler. It is precisely because of hundreds of millions of strugglers that China is today. For ten years, pay tribute to every struggle of you. Let us work together to forge ahead in the new era, and work hard towards the future.   China News Service, Huzhou, May 26 (Shi Zinan, Yao Lingli and Yang Su) At 5 a.m. in a pri 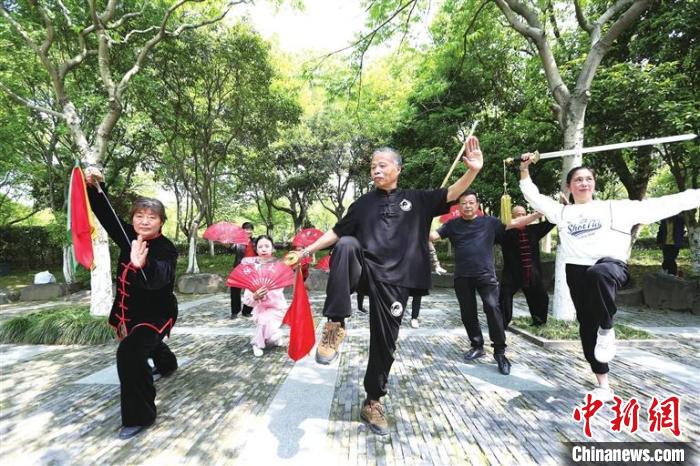 Rubbing his hands, touching his head, wiping his face, pressing his thymus... It took him three quarters of an hour to move his muscles and bones, and when his whole body became slightly hot, he felt the meridians were opened and his body stretched, "I have been doing this for decades, and I will live to old age. Exercise till you get old."

From the age of 5 to the present, Wang Pusheng has been with martial arts and boxing for 66 years.

While loving fitness, he also popularized martial arts knowledge for public welfare and became an important force to help the development of national fitness in Huzhou.

Born in Jiaojiang, Taizhou, Wang Pusheng was frail and sickly when he was a child, so he was sent by his family to a distant relative's house to learn Shaolin boxing.

From that moment on, martial arts planted the seeds in his life.

"There was a group of children who followed their uncle to learn Shaolin Boxing. The older one was 8 years old, and I was the youngest." Wang Pusheng recalled that he spent a lot of time practicing basic skills every day. Although it was hard, after a year of practice, he felt that his physical fitness had indeed improved. love is growing.

Later, because of his mother's distress, Wang Pusheng went home to study after training for a year, but he still insisted on practicing martial arts in his spare time.

"He's a 'martial idiot'." Wang Pusheng's wife said that on the first day after marriage, he got up at 4:30 in the morning to practice boxing as usual.

Martial arts has long been an indispensable part of his life.

After graduating from university, Wang Pusheng was assigned to the Zhejiang Freshwater Fisheries Research Institute in Linghu Town, Nanxun District, Huzhou City, where he worked for 37 years.

Standing on the second starting line of life, he decisively chose to spend most of his time on sports and health.

Studying in a university for the elderly became Wang Pusheng's first stop after retirement.

He took courses in TCM health care, health qigong, Taijiquan and other courses that he was interested in. After two years of study, he served as a Taijiquan equipment teacher at an elderly university and a coach of a Taiji club. He took this opportunity to share his fitness knowledge with everyone.

In addition to spending his daily time on public welfare training, Wang Pusheng also thinks about how to strengthen the national fitness team in Huzhou.

In September 2015, under his organization, Wuxing District Wushu Association was established.

In Wang Pusheng's view, it is very important to select candidates, not only must they have a public interest, but also have a skill. "There is no salary, no subsidy, each other's good shows are connected, and each other's downfall is all dependent on everyone to work together. ."

In this way, a public welfare training martial arts association was formed.

They led the team to go deep into townships and communities, schools, institutions, enterprises, military camps and other places. For four consecutive years, they have trained more than 100,000 people for public welfare in Wuxing District, and trained more than 700 national second- and third-level social sports instructors.

In Wang Pusheng's view, learning a skill well is like building a house. The blanks must be laid well, rough machining, fine machining and then finishing.

When exercising, mind, spirit and spirit are three in one, and practice makes perfect. Understanding is also very important.

"The height of the horse's stance can be flexibly controlled according to the strength of your legs." "When punching, you should stare at the punches, and at the same time grasp the ground with your toes, twist your waist and follow your shoulders, and reach the face of the fist. When you return the punch, you should rotate Wrist, five fingers to grasp." Wang Pusheng often explained the details in detail when he taught.

It is also due to the careful teaching on weekdays that the apprentices who follow Wang Pusheng learn quickly and achieve good results in large-scale competitions.

"Master teaches meticulously and will point out the essentials of movements." Shen Shuimei from Daixi Town, Wuxing District is Wang Pusheng's apprentice. After studying for a few years, she is now the head of the Daixi Town Martial Arts Association. She goes to school every week. teach.

And Wang Pusheng brought out a lot of apprentices like Shen Shuimei.

Today, Wang Pusheng's life is very fulfilling: he does boxing in the community in the morning, practices calligraphy at home in the afternoon, and takes a walk in Baiyutan Park after dinner. The number of steps per day reaches more than 10,000 steps.

He said: "My parents named me because I hope I can use my power to save all sentient beings. I think I will continue to practice it." (End)