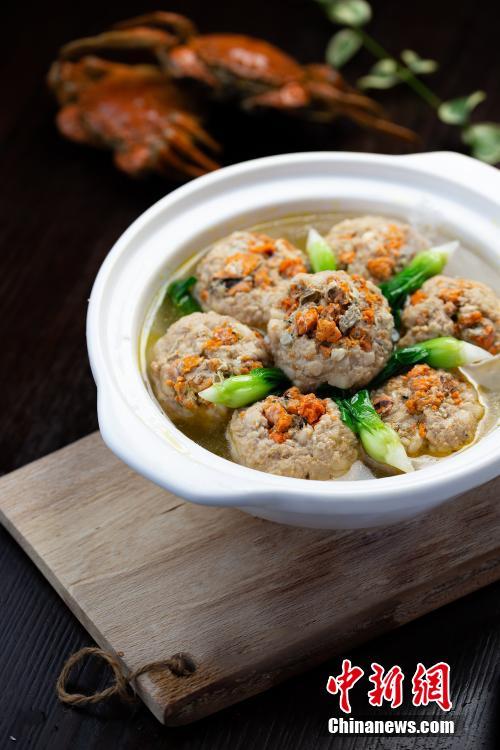 Take a large piece of pork, four parts thin and six parts fat, mix it with smashed green onions, ginger, eggs and "secret ingredients", and knead it into fist-sized loose but not loose pink meatballs... It seems simple The process is full of internal strength.

This is the preparation method of the famous Huaiyang dish "braised lion head", and it is also a unique skill that Meng Xiangren, deputy dean of the School of Tourism and Culinary Arts of Yangzhou University, often shows to guests at home and abroad.

The name "Lion Head" is loud, but the ingredients used have nothing to do with lions.

According to legend, in the Tang Dynasty, when Wei Zhi, the Duke of Huan, held a banquet for guests, the cook in the house made a "sunflower chopped meat", and the sunflower heart made of meat dumplings looked like the head of a lion.

During the staggered preparations, Wei Zhi said, "In order to commemorate this evening's meeting, it is better to change the name of 'Sunflower Cut Pork' to 'Lion's Head'."

The picture shows the chef of Huaiyang cuisine preparing the side dishes of Yangzhou fried rice.

"If a foreign guest sees a lion's head on the menu, it is estimated that they will not dare to eat it; if there is a big misunderstanding, they will complain to an animal protection organization." Yang Jing, who lives in New Zealand, told a reporter from China News Agency that "braised lion's head" cannot be translated directly in English. It should be "Braised pork ball in brown sauce", which means "braised pork ball in brown sauce".

Meng Xiangren said that as early as 1949, in the "first feast of the founding of the People's Republic of China", there was this braised lion head that was "light but not bland, fat but not greasy".

For decades, Huaiyang cuisine has been the staple of state banquets.

Taking the braised lion head as an example, every process is extremely exquisite, from the selection of ingredients, the processing of the knife, the stirring of the meat, the sizing and flavoring, and the steaming.

Because of this, it was difficult for Huaiyang cuisine to enter the homes of ordinary people.

Ji Xiaoli, chairman of Jiangsu Xiaochuniang Catering Management Co., Ltd., decided to transform the Huaiyang restaurant, which is "exclusive" for high-end banquets, into a "homey restaurant".

Mainly focus on "people-friendly" ingredients, fade away luxurious decoration, and reduce operating costs... In recent years, like Ji Xiaoli, many merchants have adopted a series of "slimming" programs to maintain the original flavor of Huaiyang cuisine, while reducing the unit price to RMB 100 yuan about.

In addition to the efforts of traditional catering businesses, new retail e-commerce, short video platforms, and pre-made food businesses have made Huaiyang cuisine enter the homes of thousands of people.

The picture shows the morning tea in Yangzhou.

Under the wave of standardization of Chinese cuisine, many traditional cuisines have moved from the inheritance of experience to the process of precise and standardized.

"Gourmet food needs to be developed through integrity and innovation." Yu Xuerong, president of the Jiangsu Catering Industry Association, believes that the "civilian transformation" of Huaiyang cuisine has injected new vitality into itself.

After unpacking, in a short while, the whole house is full of dishes.

Yang Jing from the other side of the ocean has insisted on cooking Chinese food for her children at home for more than ten years.

"Through a variety of cooking-related apps, I have learned a lot of authentic Huaiyang dishes. I can eat the taste of my hometown even in a foreign country." (End)