A long time ago in a galaxy far, far away: 45 years ago, the first Star Wars movie was released

On May 25, 1977, the first film of the legendary saga of George Lucas "Star Wars" was released. The picture immediately became a sensation due to innovative special effects for that time. The film brought fame to the actors who starred in it and played a big role in the further development of cinema. Star Wars: Episode IV - A New Hope received numerous awards and was inducted into the US National Film Registry. About the filming of the picture and the first reaction of the audience - in the material RT. 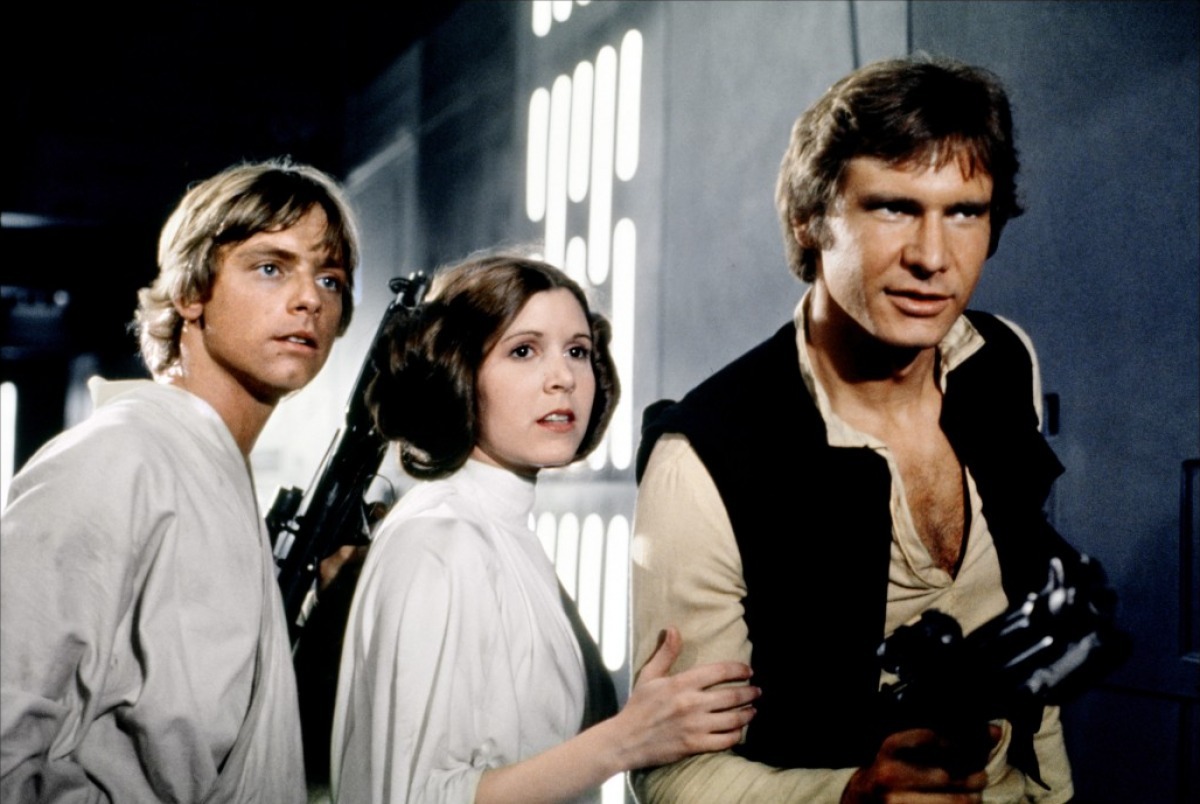 On May 25, 1977, the premiere of the first film in George Lucas's classic trilogy, Star Wars: Episode 4 - A New Hope, marked the beginning of the entire saga.

In the center of the plot is the Jedi Obi-Wan Kenobi, who saves the young Luke Skywalker and helps him understand his destiny.

Together with the mercenary pilot Han Solo, the humanoid Chewbacca and the droids R2D2 and C3PO, they are trying to find the leader of the rebels, Princess Leia, in order to together fight back the right hand of the evil Emperor - Darth Vader, whose secret weapon is terrifying almost everyone in the galaxy.

As part of the franchise, 11 feature films and several animated and live-action series have already been released.

However, it was A New Hope that not only became the beginning of this grandiose story, but also changed the course of film production in many ways.

“The idea was to make an adventure movie, which I loved as a child, with serious psychological topics,” George Lucas noted.

In an interview, he said that during the filming of the first part, the team faced many problems: the studio with which the director worked did not allow the film to be completed, stopping work about two weeks before the planned deadline.

At that time, in particular, the opening scenes were not filmed, and the studio suggested that the director do without them.

“We failed to accomplish a lot of what I wanted to do.

We just didn’t have time to finish the film, ”said Lucas.

As a result, according to him, the team had to work hard in order to have time to shoot at least part of what they did not have time to do.

This is partly why the filmmaker decided to open his own LucasFilm studio and built the Industrial Light & Magic building for special effects specialists.

George Lucas began writing the script for the film about two and a half years before filming.

The director was given a hard plot, he rewrote the text many times.

As a result, the director chose one of the ideas.

It was good, but too big for a single movie, so Lucas decided to split it into two parts, and each of them into three episodes.

“I was inspired by all the great filmmakers and great storytellers,” Lucas said.

- When I was in film school, I was fond of Japanese films by Kurosawa.

He was my idol, so his influence on my work was very great.

In addition, I first studied anthropology and mythology and only then turned to cinema.

I kind of used all the knowledge I got to make this kind of film.

Ultimately, everything together was reborn into something completely new.

That's what made Star Wars what it is."

Lucas' main requirement for the casting was to use only young and unknown artists.

Samples were held by many stars, among which were Sylvester Stallone, Kurt Russell, Jodie Foster.

But the creator of the galactic universe continued to look for those who had not yet had time to shine in front of a wide audience.

Filming was going to start in March 1976 in the Tunisian desert.

She was chosen to direct episodes on the planet Tatooine.

But everything did not go according to plan: heavy rain suddenly hit the desert - for the first time in 50 years in this area and at this time.

“The first film was very difficult.

We always lacked either time or money, and we had to constantly compromise.

A difficult experience from start to finish, ”the director recalled.

Weather conditions were not the only problem.

The control of the R2D2 robot constantly malfunctioned, it took a whole day to film how it moves several meters.

In addition, the sand damaged some of the equipment beyond repair.

Among other things, relations between the members of the film crew were tense, and Lucas himself was annoyed by literally everything during work.

Later, he admitted that he did not believe in the success of his picture, like many who worked on it.

“I didn’t expect the film to succeed at all.

I don't think anyone expected.

But I was pleasantly surprised and realized that this was an opportunity to make a difference and get more power over what I do, because I was determined to make three films by all means.

That was my main motivation,” said Lucas.

The special effects and graphics that were intended at the time were difficult to implement, so the team had to resort to all their imagination and skills to make something that the viewer would later admire.

“As for the visual effects, they didn’t know how then.

Previously, no one did this, and there was no equipment for this, it has not yet been invented, - Lucas admitted.

“So while working on A New Hope, we ourselves created a lot of new technologies.”

According to modeler and film artist Paul Huston, working on the film was exciting - the group had no wiggle room, but it didn't matter.

“There were probably ten people on the spot.

In this little room with a plywood floor and walls made of the same plywood or cinder block, there was an art department, where instead of drafting tables there were doors on sawhorses - the situation is very severe.

It added to the charm in its own way.

The most important thing was not the place, but the work that was done there, ”said Houston.

Lucas' film quickly gained the interest of a wide audience.

Its box office receipts for the first release amounted to more than $ 307 million on a budget of $ 11 million. Taking into account re-releases, the tape earned more than $ 775 million worldwide. In addition, the project received 11 Oscar nominations and was awarded seven statuettes.

However, experts initially described A New Hope as banal and incapable of captivating the viewer.

Many critics were unprepared for the new trend in science fiction and often compared Star Wars to the genre's predecessors, such as A Space Odyssey.

Film reviewer John Simon of New York Magazine wrote in his review that there was no hint of a "future" in Lucas's film.

He believed that the plot was boring, and among the characters there was no one really interesting.

“Take away the often powerful imagery and high-flown scientific jargon from Star Wars, and you have a plot, characters and dialogue that is impossibly trite and completely devoid of any futurism,” Simon wrote.

However, something did hook him - the journalist positively assessed C3PO and R2D2.

“Much more can be said about the two robots that eclipsed everyone: one humanoid, speaking with a British accent through the mouth of Edward Everett Horton, who starred as him;

the other is something like a self-propelled trash can with electronics, ”said Simon.

The Guardian's Derek Malcolm also took the tape cool, saying that it can not be called the best picture of the year.

“If you look at it objectively — and this is, of course, an insanely difficult task now — Star Wars has surpassed Lucas's previous works only at the box office.

This picture is not worthy of a number of other titles that zealous critics are trying to assign to it, ”wrote Malcolm.

Meanwhile, there were those in the media who were completely delighted with the starry galaxy of Lucas and his heroes.

One of them is The Telegraph journalist Adrian Berry.

Star Wars is a far cry from its ugly predecessors.

This is the best film of its kind since A Space Odyssey, and in certain aspects one of the most impressive of all time, ”said the film critic.

Charles Champlin of the Los Angeles Times was impressed with the technical solutions in Star Wars.

Also comparing the tape with Kubrick's A Space Odyssey, he noted that, despite the smaller budget, Lucas managed to distinguish himself.

The journalist was sure that the director's inventive creation was a perfect example of a science fiction film.

"Lucas' script and film is such a warm mixture of outstanding professionalism and captivating, almost childlike simplicity," wrote Champlin.

The release of the first film in the saga had a great impact on the future of filmmaking.

Each subsequent episode only confirmed the initial success of the franchise.

John Dykstra, special effects director and original director of Industrial Light & Magic, invented the camera system specifically for the fourth episode, which was later named after him - Dykstraflex.

Without this invention, the film would not have been so unique.

Traditional science fiction at the time, for the most part, showed the future, or at least alien worlds, clean and bright.

But George Lucas went the other way - his world is far from perfect: broken droids, giant caterpillars covered in grease, battered and dirty spaceships.

A New Hope, compared to other films of this genre, was closer to our reality, and the audience appreciated it.

The distortion of the ideal space aesthetic had a big impact on the genre.

In addition to special effects, the sound design of the film also played a significant role.

The film crew, led by George Lucas, literally created such an activity as sound design.

Suffice it to recall how many effects the sound engineer Ben Burtt has collected.

Some he recorded on his own, combining organic and electronic sounds.

What appeared in Star Wars was never heard before: the roar of Chewbacca (a mixture of the cries of a bear, walrus and other animals) or the sounds of a star fighter (stretched howl of an elephant).

In general, the dynamics in the picture were different from those in other films of the genre.

Star fighters and spaceships moved at lightning speed, actively maneuvering across the expanses of the galaxy.

It was a clear departure from the old science fiction and space realities in which ships were big and slow.

Followed by A New Hope

In 1980, the next part of the saga, Star Wars: Episode 5 - The Empire Strikes Back, was released.

The director decided not to stop and follow the original plan.

In 1999, the first picture of the prequel trilogy ("Star Wars: Episode 1 - The Phantom Menace") was released, which became the beginning of the story of young Anakin, who became the terrifying Darth Vader.

The film was a success, grossing over $1 billion worldwide.

After releasing six films, George Lucas sold his rights to Disney, which he later regretted, saying that he had given "his own children" into slavery.

The company completely distanced itself from the storyline that the director built and began to release films according to their own vision.

As a result, fans were not enthusiastic about the films of the third trilogy.

The producer and director Dave Filoni came to the rescue, filming animated series based on the Star Wars universe.

He negotiated with Disney and convinced to change the format and start releasing serial projects.

So the audience was able to see the series "The Mandalorian" (2019), and now they are waiting for the mini-project "Obi-Wan Kenobi".