(In the past ten years of China, my hometown) "Encounter Snow Leopard" brings a hot plateau town 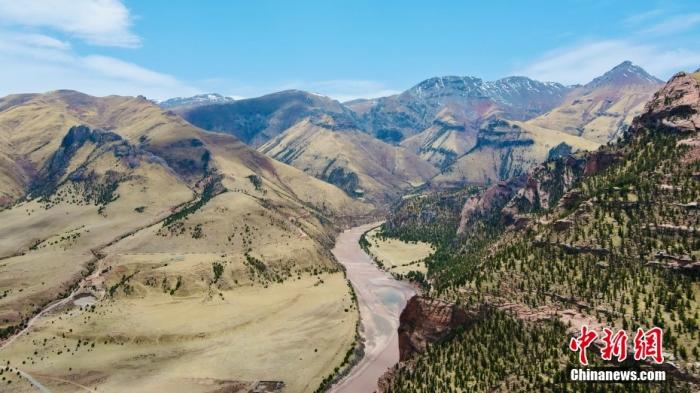 "The first guest I received was an American photographer who made a special trip to photograph snow leopards." Yunta, a herdsman in Niandu Village, Angsai Township, Zaduo County, Yushu, Qinghai recalled receiving a visitor for the first time: "I just started speaking Mandarin. If you are not fluent, you are very shy when you see guests, and always hide behind."

The picture shows the scenery of Lancang Jiangyuan Park in Sanjiangyuan National Park on April 29.

It is also the paradise of the "Snow Mountain Spirit" snow leopard, which is known as the "Hometown of Snow Leopards in China".

Coming here to "encounter snow leopards" is the dream of many Chinese and foreign travelers.

The picture shows the scenery of Lancang Jiangyuan Park in Sanjiangyuan National Park on April 29.

The following year, the local government cooperated with the Shanshui Nature Conservation Center to conduct training for 21 natural experience host families, including the Yunta family.

The picture shows that on April 29, Yunta showed a photo of him and his guests to reporters.

"I remember it very clearly. It was an early morning. I took him up the mountain. I happened to see a snow leopard chasing the blue sheep. The guests were very excited and took pictures with a camera."

In 2020, the American photographer came to Angsai again and was hosted by other families.

Yunta, who heard the news, hurried to meet with an old friend.

"He recognized me at a glance, we hugged excitedly, and he was so moved that I came to see him specially."

The picture shows on April 29, Yunta in front of his old house (left) and new residence (right).

In the past few years, Yunta has received nearly 10 groups of visitors for nature experience, and the income of the host family now accounts for half of the Yunta family's annual income.

Now, an exquisite Tibetan-style log cabin has been built next to the old house of Yunta to receive visitors.

There are two rooms in the house, which are clean and tidy. There are all kinds of snacks and snacks on the table, and pictures of Yunta and the visitors are hung on the wall.

Yunta said that the visiting guests are all friendly, and they are full of curiosity and expectation for the Sanjiangyuan area.

"What touched me the most was that a foreign visitor held my hand when he was about to leave and said, thank you very much for taking him to see the snow leopard, and hope that I will work hard and become an excellent nature observation teacher."

Cloud Tower is in touch with every visitor it receives.

"I learned a lot from them. They taught me photography and told me about their country's environmental protection concepts. I am now a 'well-informed' person in the village." Yunta said while taking out the photos sent by visitors. Textbooks, pages have been flipped a little worn out.

The reporter learned that 45% of the income of the Angsai ecological experience franchise project belongs to the host family, 45% is used as a community public fund, and the other 10% is used as a wildlife protection fund.

As of November 2021, the Angsai Nature Experience Project has received a total of 169 teams with 479 people, a total income of 1.7372 million yuan (RMB, the same below), and a community fund (including the village collective fund and protection fund) of 955,460 yuan. An average increase of 37,000 yuan.

At the NGO parallel forum at the 15th meeting of the Conference of the Parties to the Convention on Biological Diversity (COP15) held in Kunming last year, the pilot nature experience project in Niandu Village, Angsai Township was also selected as one of the "Biodiversity 100+ Global Special Recommended Cases".

It is reported that Zaduo County has started the planning of Sanjiangyuan·Angsai Snow Leopard Town, which will become the first "gateway town" of Sanjiangyuan National Park in the future.

At present, the town project is entering the design stage.