Repairing what man has destroyed, at least in part, is the bet launched by the Montpellier company Ecocéan. Its field of action: the ports. Thanks to several innovative processes, Ecocéan… 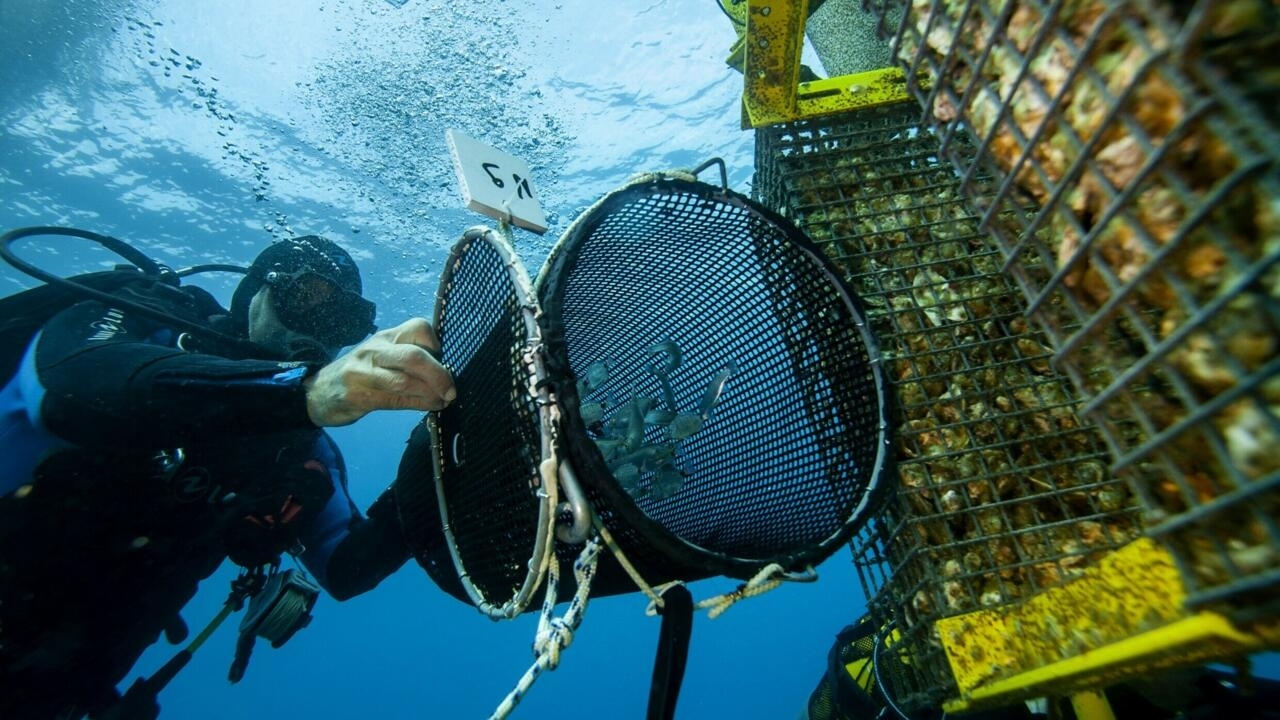 Ecocéan, the Montpellier company that restores biodiversity in French ports

An Ecocean diver checks a cage installed in May 2019 to monitor fish migration flows.

Repairing what man has destroyed, at least in part, is the bet launched by the Montpellier company Ecocéan.

Its field of action: the ports.

Thanks to several innovative processes, Ecocéan has been working for ten years to repopulate with fish and restore the biodiversity of these concrete areas.

Marine de La Moissonnière visited the fish farm that this company has set up in the port of Marseille.

You just have a small footbath, it's a first sanitary barrier and we go over it to disinfect ourselves.

No question of taking the slightest risk for the thousand baby fish that grow up in these tanks installed in this container in the large seaport of Marseille.

Caught in the state of larvae a few meters away, in the Mediterranean Sea where their chances of survival are almost nil – due in particular to pollution, climate change and the disappearance of their natural habitat – these fish will spend around 6 month here.

Time to get bigger and stronger, as Damien Einsargueix, head of fish farms at Ecocéan, explains.

Either we make house pies, or we also buy a pellet.

And besides, we also have live prey to be able to stimulate the animals to the hunting instinct.

We have different feeding times every day.

And afterwards, we deliberately have lids that are opacifying to avoid, when we pass near the basins, that the animals are interested in humans.

What interests us is almost that the animals are afraid when you lift the lid.

Because in nature, it is with behavior like that that they will be safe from predators.

There, you have animals that are much bigger, between 7 and 10 cm easily.

So, only a few more weeks before returning to the big blue.

Another way to protect young fish is to set up shelters for them in ports.

These cages serve as nurseries for young fish.

Clinging to rocks, pontoons, quays or mooring chains, these oases of biodiversity replace their natural habitat.

The ports make great efforts to have bathing water quality, so the fish do not necessarily realize that there is pollution.

They are often attracted to activity, because they tell themselves that if there is noise, there may be something to eat, to do, to hunt.

So they go into a harbor as well as into a natural area and they find themselves trapped because there are predators.

They cannot take refuge or hide, because they find themselves in a place where the natural habitat has disappeared.

Conservation as a watchword

So even if we can correct human errors and help fish during critical stages of their development, this does not mean that everything is allowed, warns Philippe Lenfant, professor of marine ecology at the University of Perpignan.

The more we degrade, the more difficult it is to find functionalities and the more expensive it is.

So the idea is to degrade as little as possible, it's non-destruction and conservation.

Where we have already impacted, let's try to help nature and the ecosystem to start again.

And for the effects to be significant, insists Philippe Lenfant, several ports must embark on ecological restoration in the same region.