To an amazing world of fun, learning and play, the Sharjah Children's Reading Festival, accompanied its 13th edition, visitors, adults and children, transforming the halls of the Expo Center Sharjah - over a period of 12 days - into an open space to discover talents, creativity and arts, during the event that concluded its activities or 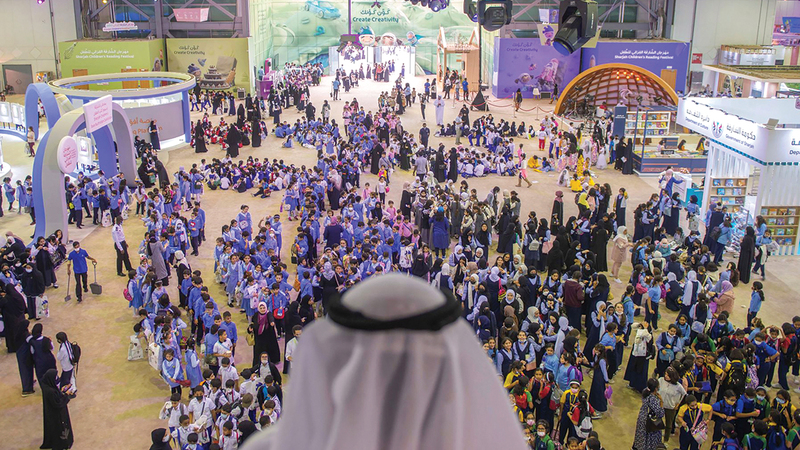 Take his guests into an amazing world of fun and learning

To an amazing world of fun, learning and play, the 13th Sharjah Children's Reading Festival accompanied adults and children, transforming the halls of the Expo Center Sharjah - over a period of 12 days - into an open space to discover talents, creativity and arts, during the event that concluded its activities the day before yesterday.

The festival, which this year bore the slogan "Be Your Being", succeeded in attracting 112,350 visitors in one space amidst tales, stories, sciences and knowledge presented by 139 publishers, in the presence and participation of elite writers, artists and creators from around the world.

The festival culminated its efforts to advance the book industry in the region and the world, with the generosity of His Highness Sheikh Dr. Sultan bin Muhammad Al Qasimi, Supreme Council Member and Ruler of Sharjah, where His Highness directed the allocation of 2.5 million dirhams to provide Sharjah libraries with the latest versions of Arab and foreign books presented by the festival.

The head of the Sharjah Book Authority, Ahmed bin Rakkad Al Ameri, said, “The task of building new generations who own the tools of knowledge and know the value of the book and are able to contribute to the renaissance of their countries, is a continuous task and does not have an end date, and it is the essence of any civilized project that knows its centers of strength, for this we are in Sharjah. We are proceeding under the directives of His Highness Sheikh Dr. Sultan bin Muhammad Al Qasimi, Member of the Supreme Council and Ruler of Sharjah, and the care of his wife, Her Highness Sheikha Jawaher bint Muhammad Al Qasimi, President of the Supreme Council for Family Affairs, so that the efforts of the festival and its impact continue throughout the year, starting from Sharjah and extending to reach various countries in the region and the world. ».

He added: “In this year’s edition of the festival, we have achieved many of our goals and aspirations through which we aim to advance children’s literature in our Arab region and the world in general.

Today, as we close the curtain on this event, the journey of preparing to receive new events and activities hosted by Sharjah, in line with the vision of His Highness the Ruler of Sharjah, who made caring for human culture and understanding and dialogue with the other, through reading and tasting purposeful arts, as a means to elevate oneself and build the nation’s civilized project. The interest in the culture of the child is at the forefront of this firm trend.”

For her part, the festival’s general coordinator, Khawla Al-Mujaini, said: “At the conclusion of each session, we read the changes that new generations are going through in terms of their mechanisms of acquiring knowledge, their aspirations for learning, and what interests them most, and this puts us in front of a clearer vision for the upcoming sessions of the festival. This year, interactive education and knowledge related to play were the general feature of the festival’s workshop and activities program, embodying the festival’s slogan, which is related to the act of reading in its broadest sense, and includes books, contemplation of drawings and a taste of artistic performances, and encouraging children to develop their creative talents by taking advantage of all sources and forms of knowledge.”

This year, the festival received a group of Emirati, Arab and foreign creators, writers and artists, as 43 guests from 21 countries around the world participated in presenting 120 cultural events, including Egyptian star Mohamed Henedy, film director and American painter Kyle Balda, director and animator of the famous Minions movie.

The various activities of the festival were attended by discussing the most prominent issues of culture, creativity and publishing for children, in addition to other activities such as the social networking station, the cooking corner, and book display platforms that hosted 139 publishing houses from 15 Arab and foreign countries.

The festival also witnessed the organization of the tenth edition of the Sharjah Children's Book Illustrations Exhibition, with the participation of 296 illustrators from 48 Arab and foreign countries.

Over the course of its days, the Sharjah Children’s Reading Festival organized more than 1,900 events that varied between theatrical and artistic performances, creative workshops and dialogue sessions, which discussed issues and topics dealing with the present and future of children’s literature, and the development of media content directed at children and adolescents through various means, including 120 cultural events and 130 artistic performances. Theatrical performances, and 1140 activities for children, including 750 workshops, were presented by 11 guests from 14 countries.