Most automakers are not moving at the speed required by climate change targets that, for example, seek to limit warming... 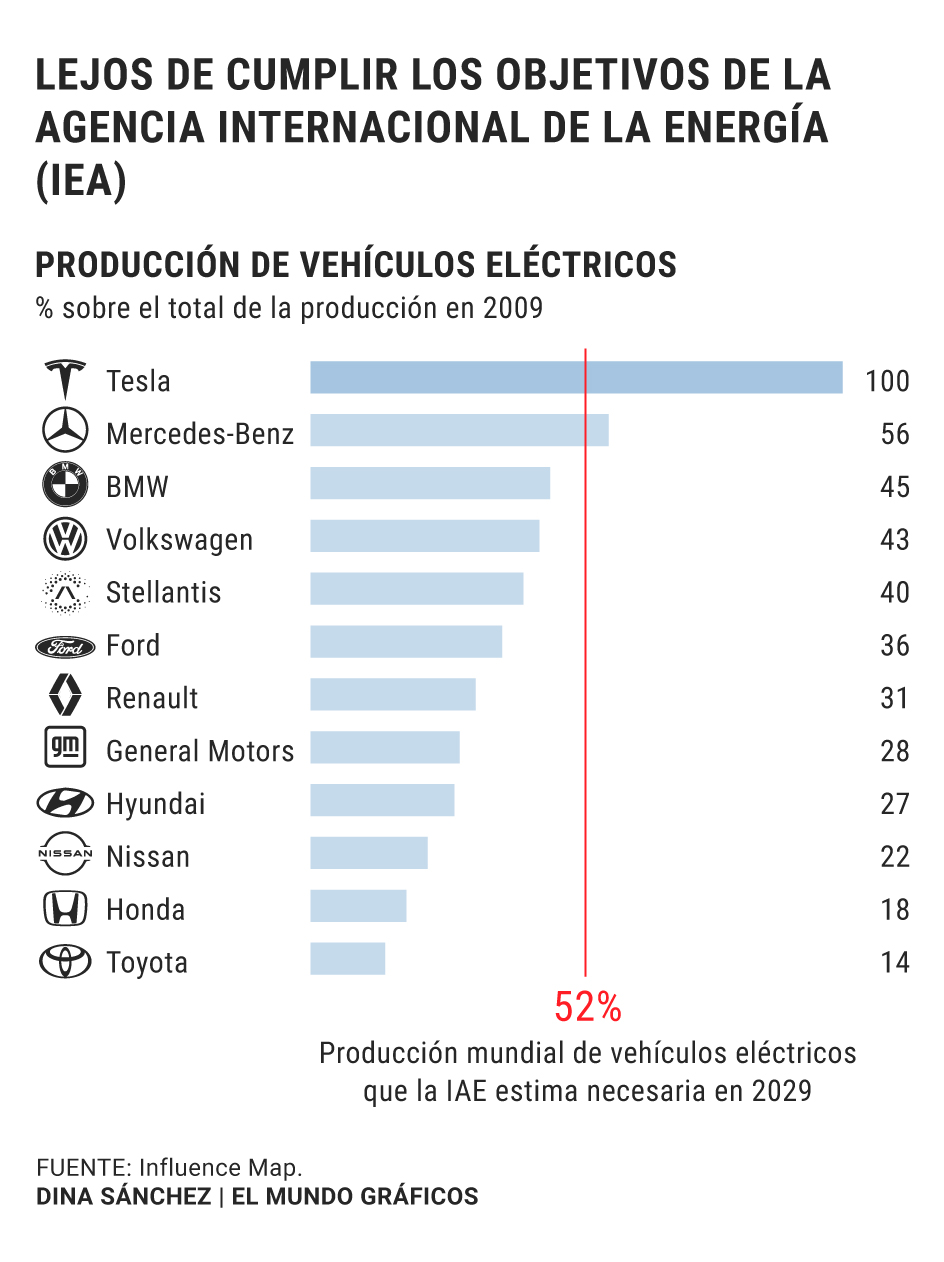 Most carmakers are not advancing at the speed required by climate change targets that, for example, seek to limit global warming to 1.5 degrees under the Paris Agreements.

within the framework of the strategy set by the International Energy Agency (IEA) last year.

of the 12 large builders analyzed, only one (the American Tesla) is completely in line with the environmental roadmap.

And only this last company, together with the German Mercedes-Benz, foresee a sufficiently fast transition

Far from that reality, the InfluenceMap experts forecast is that this percentage will be 20 points lower in 2029,

with 32% of the total and the rest, cars with a combustion engine.

This would force a Herculean effort on the industry

since it would have to increase the volume of zero-emission models by 80% in 2029.

Behind Tesla and Mercedes-Benz are BMW (45% of the total);

In the last positions and

with great difficulties to reach the goal, the three great Japanese: Nissan (22%), Honda (18%) and Toyota (14%), which are the ones that are going to continue giving hybrid models the most ground .

The EU will comply

And it is that the authors of the work put on the table a contradiction.

On the one hand, the degree of commitment of manufacturers to climate change, which is reasonable or high except in the case of the three Japanese companies.

But, at the same time, the majority opposition to regulations aimed at the gradual elimination of cars with combustion engines.

Precisely this last link with one of the conclusions of the work that, we must not forget, has a global focus.

It is about the direct relationship between the decarbonization policies of each region in relation to the automobile, and the local production of zero emission vehicles.

The paradigmatic case is Europe, which is about to approve a 2035 ban on the sale of gasoline and diesel vehicles, including hybrids.

In addition, the CO2 reduction targets for the middle of this decade are tightened.

Its effect is clear: the EU will be the only region in the world that will be meeting the objectives in 2029, with 59% of total production of emission-free models.

the world's leading market for vehicles and also for battery-powered models.

In this case, InfluenceMap forecasts that the volumes of the latter will go from 12% of the total in 2021 to 40% by the end of the decade.

However, the consultant also points out that they have not been able to assess "the commitment to climate change of local manufacturers" and leaves "a more detailed study" for later.

The requirements are more lax in the US or Japan and this is reflected in the global figures for each region and in those of the manufacturers that operate in them.

For example, 49% of the cars that Toyota would be manufacturing in 2029 in Europe would be battery powered, but only 3% in the US.

And Ford, which does not pass the cut worldwide either, will reach 65% of electrics in the Old Continent.

where it is possible or required

This is something that the industry does not hide.

Mercedes-Benz and Renault, to cite just two cases, have already said that they want to

Which means that there will be areas of the planet that will become the markets where cars with combustion engines are released and finish amortizing, if it is the case, the investments in them.

In this way, it is expected in

India up to 91% of all production in 10 years will continue to be conventional cars;

The work also highlights a contradiction in the behavior of manufacturers.

And it is the attachment that they will continue to have to vehicles with SUV or SUV bodywork.

Currently, they are by far the favorites of customers and in Spain they account for almost six out of 10 registrations in 2022.

These are larger and heavier vehicles, therefore more inefficient and counterproductive to reduce global warming.

But despite this, IHS Markit forecasts that

its global market share will not stop growing: from the current 39% it will go to 47% by the end of the decade.

the recommendations that the IEA

presented a year ago to help decarbonization not only contemplate promoting the production of zero-emission vehicles that have been valued in this study.

They also point out other measures such as the

reduction of speed limits in

order to save fuel;

creation of congestion charges that discourage the use of private vehicles

while supporting other mobility options such as cycling or public transport.