The Dubai Future Foundation launched an illustrated story for children entitled "Hind and Muhammad's Journey to the Future", with the aim of consolidating the idea of ​​making the future among children at an early age, and supporting national efforts to prepare future leaders. It is scheduled to distribute 300,000 hard copies in both Arabic and English. 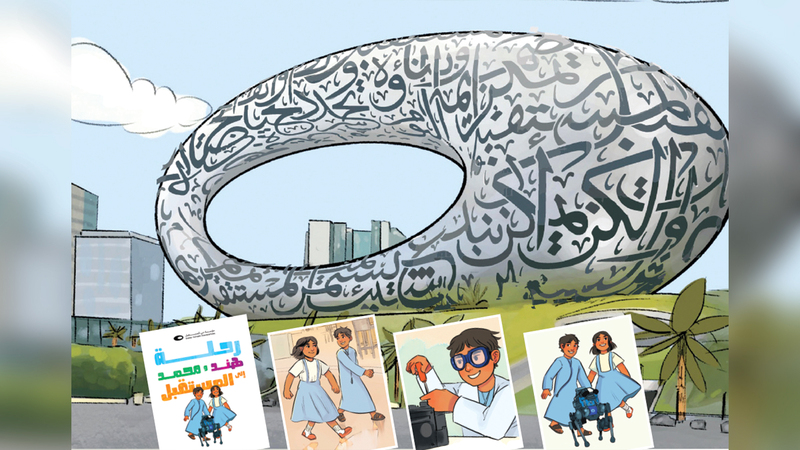 The Dubai Future Foundation has launched an illustrated story for children entitled "Hind and Muhammad's Journey to the Future", with the aim of consolidating the idea of ​​making the future among children at an early age, and supporting national efforts to prepare future leaders.

It is scheduled to distribute 300,000 paper copies in both Arabic and English to public and private school students, aged between six and 14, in cooperation between the Dubai Future Foundation, the Knowledge and Human Development Authority in Dubai, and the Emirates School Education Corporation.

The launch of the first story in a series of illustrated stories that the Dubai Future Foundation will reveal during the coming period will inspire the next generation of young people in the UAE, qualify them to participate in a vital role in creating the future, and enhance their confidence in their abilities by introducing them to the various skills, concepts and future tools necessary to continue the development process. Prepare for the changes and challenges of the future.

For his part, Abdulaziz Al-Jaziri, Executive Vice President of the Dubai Future Foundation, said, “The launch of this story comes within the framework of the Foundation’s keenness to implement the leadership’s directives with the importance of focusing on raising future generations, and empowering them with skills and tools for future industry from an early age to be future leaders, and the main motive for the development of various sectors. And the most important element in the success of the UAE’s march to be one of the best countries in the world.”

The comic story centers on the experience of Hind and Muhammad while they talk in front of their schoolmates about their dreams, although they do not yet know what they want to become when they grow up, and here begins their journey to discover the future, discover themselves and their dreams, and how they can participate in creating a better future for humanity.

In addition to the story written by the Dubai Future Foundation team, and the talented Emirati designer Khawla Al Muhairi worked on drawing its course in 20 pages, children will be able to write a message for themselves in the future, and enjoy the pages dedicated to coloring, as well as a distinctive set of stickers.

Those wishing to browse and download the story “Hind and Muhammad’s Journey to the Future” can visit the following link: (

• 300 thousand paper copies to be distributed to students of public and private schools in Dubai.