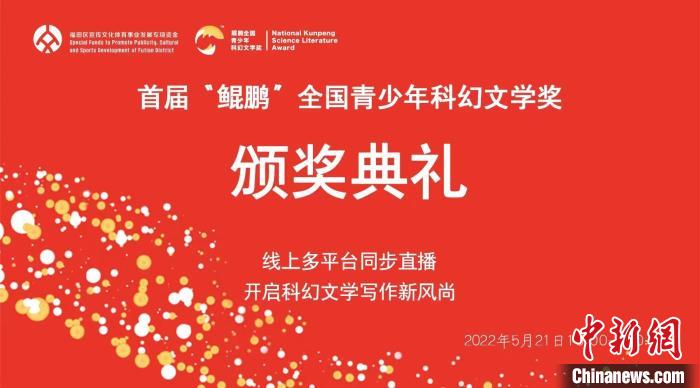 The expert committee selected "Lighthouse" and other high-quality works from nearly 30,000 submitted works, and 17 authors including Peng Linfang won the first, second and third prizes of the competition.

Zhu Yongxin, Vice Chairman of the Democratic Progressive Central Committee, Member of the Standing Committee and Deputy Secretary General of the National Committee of the Chinese People's Political Consultative Conference, said: "The 'Kunpeng' Award is a major event of special significance in the field of science fiction literature, especially in the field of youth science fiction literature. It is believed that the establishment of this award will further inspire young people in my country. The passion for science, learning science, writing, and devoting to literature will further promote Chinese science fiction to the world." As an educator who has long been concerned about reading for all, he calls on educators and readers to continue to pay attention to the follow-up publication of award-winning works.

The list of winners of the first "Kunpeng" Award was announced at the awards ceremony. The first prizes were "Lighthouse" (written by Peng Linfang), "Stone Stele" (written by Wang Yibo), and "Mother Singing" (written by Song Yuting), which won the second prize. "The White Star" (written by Sun Mengyang), "Experimental Family" (written by Dai Chenyang), "Eve Disqualified" (written by Mo Huaiyi), "The Hive" (written by Xie Kaiyan), and the third prize is "Stars in Time" " (by Ma Lingyu), "The End of Mobius" (by Yu Tianyi), "Xingyuan Li" (by Yang Haoyu), "Theseus" (by Yu Siqi), "Immortal" (by Miao Linxiang) ), "Summer Eternal" (written by Xu Xiling), "Voyage Diary" (written by Cen Yeming), "Anecdotes of United World" (written by Li Chuhan), "Community of Personality" (written by Liu Yuxi), "The Twilight of Human Civilization" ( by Lu Jiayao).

The "Kunpeng" Award unites and attracts a large number of young people to participate in the creation of science fiction literature, which has a unique charm.

The first "Kunpeng" Award was held very successfully, and this award will definitely promote the development of juvenile science fiction literature.

Liu Cixin, a famous sci-fi writer, believes: "Sci-fi is a literary subject full of youth and vitality. We can deeply feel the influence of sci-fi works on the way of thinking and worldview of young readers. At present, the development of domestic sci-fi is still far behind the needs of the times. There is still a huge space for development. Science fiction literature is eager to support and cultivate from all walks of life. Because of this, the creation of this award is full of foresight. The receipt of so many manuscripts from all over the country shows the incomparable enthusiasm of young people for science fiction. It shows the great potential of the 'Kunpeng' Award, and I hope more excellent works and writers will emerge from it."

Zhang Hairong, Minister of Propaganda of Shenzhen Futian District Committee of the Communist Party of China, delivered a speech on behalf of the organizers.

Looking forward to more young friends in Shenzhen and the whole country picking up pens and trying to write science fiction, providing science fiction answers to the future destiny of the universe and human beings.

The second "Kunpeng" Award was officially launched at the awarding site, collecting science fiction works for young people aged 25 and below across the country.