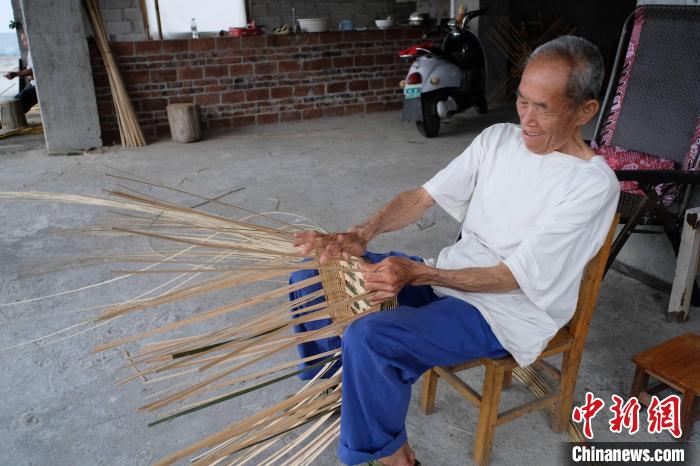 Tan is weaving bamboo baskets under the eaves of the house.

The mature bamboos are divided into bamboo strips in their hands after several processes such as slicing, scraping, and slitting. The bamboo strips of uniform thickness and thickness are interspersed back and forth between their dexterous fingertips, and soon the bamboo baskets are smashed. The prototype appears.

Huaihong Village, Baipeng Town, located on the outskirts of the city, is famous for its lotus flowers.

Every summer, tens of thousands of acres of green lotus bloom in the paddy fields, attracting many tourists to come and watch.

In the villages surrounded by lotus ponds, there are more than a dozen craftsmen who still insist on using fish cages, bird cages and lotus root baskets made of bamboo strips.

With the popularity of plastic products, this traditional skill continues in their dexterous hands.

Bamboo weaving has 300 years of cultural accumulation in the area, reflecting the creative spirit and aesthetic taste of the Zhuang people.

Mrs. Tan, who is over 70 years old in the village, has been learning bamboo weaving from her parents since she was 18 years old. Today, Mrs. Tan's craftsmanship is very exquisite. The bamboo baskets she weaves are beautiful and neat with neat textures.

"Bamboo basket weaving basically relies on some simple steel frame and hand-eye experience, which is usually passed down by word of mouth in the family. In the past, our families weaved these bamboo products to keep out the wind and rain, bring meals, and even 'carry' children. It's big." Qin said.

After weaving a certain amount, villagers often load up these bamboo weaving products with tricycles and sell them in downtown Liuzhou, which is nearly 30 kilometers away.

"At that time, bamboo weaving products brought considerable income to the villagers. Although it was very hard work, everyone's enthusiasm was very high." Tan Zhaoban, the leader of the Huaihong Village villager group, said.

Today, with the emergence of a variety of alternatives in the market, there are only a dozen households in the village still weaving bamboo products, and most of the inheritors who have mastered the bamboo weaving skills are old and can independently complete the weaving of bamboo products. also less and less.

However, these bamboo products are still widely welcomed by the market due to their excellent quality and affordable prices.

"The bamboo baskets they make are very popular, and the market is basically in short supply. These bamboo baskets are mainly sold to schools, restaurants, hotels and other places. We will contact the villagers in advance to order, and they will come to collect them when they are finished. About 100 pairs have been acquired this time," said Fan Changguang, a bamboo basket buyer from downtown Liuzhou.

Depending on the level of craftsmanship, bamboo weaving craftsmen weave as little as 1 or 2 pieces a day, and as many as more than ten pieces, and sell them to buyers who come here at a price of 12 to 15 yuan each.

During the slack season, weaving bamboo baskets can bring some economic income to these dozen households and become a way to generate income.

It is understood that the Zhuang nationality bamboo weaving has a long history and a wide variety of craftsmanship.

In 2016, it was included in the sixth batch of representative projects of intangible cultural heritage in Guangxi Zhuang Autonomous Region.

"Bamboo weaving skills are not only an important part of our local culture, but also a source of income for the villagers. For the non-genetic inheritance project, this kills two birds with one stone," said Qin Zhaoban.