Feature: The Wind Blows Daoxiang Recalling Yuan Lao - Memorial at the Tomb on the First Anniversary of Yuan Longping's Death 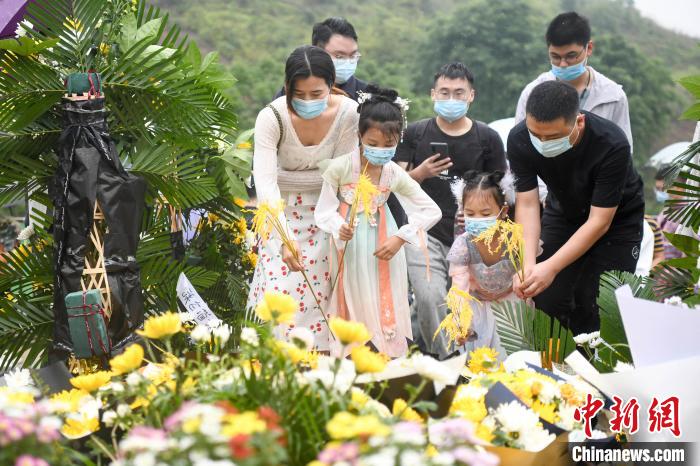 China News Service, Changsha, May 22, Question: The wind blows the fragrance of rice and remembers Yuan Lao --- Memorial at the tomb of Yuan Longping on the first anniversary of his death

Yuan Longping, the "Father of Hybrid Rice" and academician of the Chinese Academy of Engineering, devoted his life to the research, application and promotion of hybrid rice technology, making outstanding contributions to China's food security, agricultural science development and world food supply.

On May 22, 2021, the recipient of the "Medal of the Republic" passed away in Changsha due to ineffective treatment at the age of 91.

In early summer and May, the green seedlings on both sides of the road leading to the cemetery are growing gratifyingly, and the air is filled with the fragrance of the seedlings.

People from all over the world came to "visit" Mr. Yuan with chrysanthemums and golden ears of rice.

The crowd included children, students, and elderly people on crutches.

People remembering Yuan Yuan brought straw hats, apples, bananas, rice, and volleyballs and placed them in front of the tomb.

Flowers and ears of rice filled with blessings are stacked one after another.

"My uncle called me 'Xiao Yuan', so I called him 'Old Yuan', and I brought his stomach-nourishing black tea." Encouraged by Yuan Longping, Yuan Jinghui built the Jinjing Red Culture Exhibition Hall in Changsha County.

"Currently, the exhibition hall of Yuan Longping's deeds hall is being built to tell the story of Yuan Lao's life to the world."

Yuan was very concerned about the promotion and progress of hybrid rice in Madagascar, Africa.

Yuan's Seed Industry, which has successfully achieved large-scale hybrid rice seed production in Madagascar, arranged for executive general manager Liu Guoxiang to bring his employees to the cemetery to report the results.

Citizens put ears of rice in front of the tomb.

"This year, we have achieved good results in the planting of hybrid rice in Majiqi, Madagascar. In April, the on-site yield reached 10.5 tons per hectare. The 100 tons of hybrid rice seeds distributed a year ago are now all planted. The goal is to achieve a yield of 11 tons per hectare in 10 hectares of contiguous patches." Liu Guoxiang and his party also brought Yuan Lao's latest new variety "Zhongliangyou 19" approved by Yuan's Seed Industry in Hunan this year.

Although it was raining, the people who came to remember Yuan Lao came one after another.

The 27-year-old Wu Songze came by high-speed rail and plane. He laid flowers and bowed three times at the tomb.

"Old Yuan is a man who dares to tell the truth. He strives for the interests of farmers and hopes that more young people can regard him as an idol." Wu Songze said.

He Xiaojun and his wife from Changsha County brought their three children to lay flowers.

"I hope the children will learn from Academician Yuan's perseverance and sense of responsibility, and establish a correct outlook on life." He Xiaojun said.

"Grandpa Yuan is kind and likes to study hybrid rice. Thanks to Grandpa Yuan for letting us eat our stomachs and not go hungry." said He Xiaojun's 12-year-old son He Jiuchang.

The people brought straw hats and placed them in front of Yuan Longping's tomb.

Liu Jianfeng, who studied for a doctorate under Yuan Longping in 1998, is one of them.

He clearly remembered the scene when Mr. Yuan revised the English abstract of his doctoral dissertation.

"Mr. Yuan is a dedicated agricultural science and technology worker. He has not fulfilled his dream, and we are continuing the relay, sprinting towards the super hybrid rice yield of 1,200 kilograms per mu." Liu Jianfeng said choked.

A year has passed, and although Mr. passed away, the "seed spirit" lives on.

Every seed he sowed grows, bears ears and increases production both at home and abroad, and people's thoughts of Yuan Lao have also increased.

At noon, the rain did not stop, and people came to lay flowers in an endless stream.