The old master talks about the production of sour bamboo shoots with "snail powder soul": you can know the quality by smelling it

China News Service, Liuzhou, May 20th: The old master talks about the production of sour bamboo shoots of "snail powder soul": you can know the quality by smelling it   China News Service reporter Meng Mingming   Known as the "soul of snail noodles", sour bamboo shoots have been widely accepted by the public with the popularity of snail noodles. Its sour, crisp, and unique smell makes many din 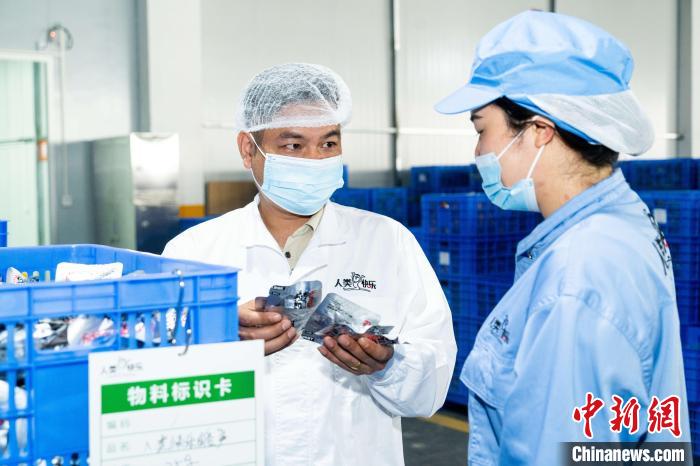 China News Service, Liuzhou, May 20th: The old master talks about the production of sour bamboo shoots of "snail powder soul": you can know the quality by smelling it

Known as the "soul of snail noodles", sour bamboo shoots have been widely accepted by the public with the popularity of snail noodles. Its sour, crisp, and unique smell makes many diners "smelt and love to eat".

The production process of this addictive ingredient is difficult to control.

"After the bamboo shoots are put into the jar for pickling, you should always pay attention to the changes in the acid water. On average, you should check it once every two or three days. If there is a shortage of water, you should replenish and adjust it in time. Especially in special circumstances such as south windy days, high temperature and sultry heat, etc. The weather, you must always pay attention." Chen Siming said.

On May 20, Chen Siming (right) instructed workers at the enterprise.

"My father's discipline is very strict. If he forgets a step, he will be scolded in the face. He didn't wash his hands before putting bamboo shoots in. When his father saw him, he directly beat him with a bamboo whip." The strictness is right, and the best ingredients must be made meticulously.”

In Chen Siming's view, from the acquisition of bamboo shoots, transportation and storage, to the selection of pickling equipment, to the control of pickling time, every link determines the success or failure and quality of pickling of sour bamboo shoots.

"For example, comparing the plastic bucket and the tile jar, the sour bamboo shoots pickled in the tile jar are obviously better in taste and taste. However, the traditional tile jar is more expensive to pickle, and many manufacturers are reluctant to use the tile jar to pickle. "

Although many apprentices and skilled employees have been brought out, and tens of thousands of catties of sour bamboo shoots leave the factory every day, Chen Siming still has to personally check and inspect each jar.

At present, Chen Siming, who has become the producer of pickled bamboo shoots for the "Happy Humans" snail powder brand, still firmly believes that the traditional production process is irreplaceable at the moment when the bagged snail powder is produced by a mechanical assembly line.

"Technological equipment can make the ratio of various ingredients accurate to the gram, but in the pickling of sour bamboo shoots, the experience of the master is still very important. In the process of natural fermentation, traditional techniques are often needed to assist in order to make the taste more pure. "Chen Siming said: "The season of bamboo shoots is coming soon. I plan to invite my father back this year. The experience of the master is really crucial."

The interesting soul of human beings is one in a hundred, and the "soul" of snail noodles is the same. Different fermentation processes and subtle environmental changes will affect the taste of sour bamboo shoots.

Nowadays, with more and more brands of bagged snail noodles, the phenomenon of homogenization is becoming more and more serious. Many brands have begun to pursue breakthroughs in taste, which are closer to the traditional or freshly cooked taste.

Chen Siming, the producer of pickled bamboo shoots, is checking the data in the office. Photo by Huang Manyu

In recent years, the booming sales of bagged snail powder has also driven the development of related industries. Among them, the raw material of snail powder is in short supply.

In Liuzhou City, Guangxi Province, many villagers have cut down the eucalyptus trees they had planted before and replaced them with bamboo, which can produce a lot of bamboo shoots, because of the obvious economic efficiency.

And has achieved a high degree of integrated development of the primary, secondary and tertiary industries, and the entire industry chain has driven more than 300,000 jobs.