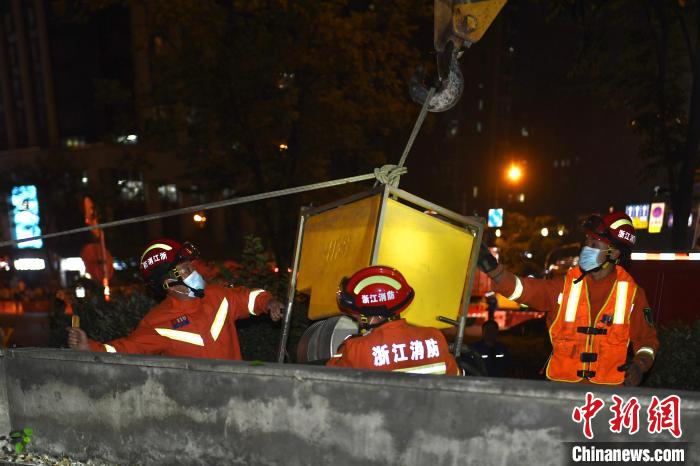 Going back in time, at 15:00 on the 18th, a pipe gushing occurred in the sunken square of Jinshahu Park in Qiantang District, Hangzhou City.

Relevant departments immediately organized emergency repairs, carried out pipe plugging and drainage of accumulated water, and all on-site personnel were evacuated, and no one was trapped.

Firefighters hoist the water pump into the subway.

In order to escort the public to travel safely, Hangzhou Metro acted quickly and issued three reminders in a row to remind citizens to adjust the driving arrangements of Line 1.

In order to do the best possible transfer of passengers as soon as possible, Hangzhou public transport forces responded to the order and rushed to help in time.

At night, the mobile lighting vehicle provides lighting for the emergency repair site.

"Around 18:00, as soon as we received the news that we needed to support the interval between Jiuhe Road Station and Wenze Road Station of Metro Line 1, we quickly organized transportation capacity to rush to the scene." Chen Shicheng, deputy general manager of Hangzhou Public Transport Group, said at 18:15 Left and right, the first shuttle bus arrived at the Jiuhe Road subway station and began to transport passengers.

"Then, the buses we dispatched came from all over the city of Hangzhou to ensure that the citizens were connected." Chen Shicheng said.

Due to the adjustment of subway travel arrangements, she also came to the connection point to wait for the bus.

"I didn't expect to need to transfer out of the station." Ms. Hong said that although it had some impact on travel, it did not affect her mood.

"The government arranged so many buses in time for the connection, which is really good and heart-warming."

A resident who lives near Jinsha Lake said that he worked nearby, and the company reminded employees to pay attention to the problem of getting off work in the afternoon.

"After get off work, many colleagues choose to travel by bus, and some choose to share bicycles." He admitted that the suspension of Jinsha Lake subway station has little impact on him.

At the scene, he also witnessed the arrival of large vehicles such as fire trucks, lighting trucks, and pump trucks, racing against time to join the emergency repair.

The Yiwang car-hailing driver, who came to the vicinity of Jinsha Lake to take orders, witnessed the real-time road conditions with his own eyes.

He told reporters: "There are many cars and people nearby, and there are many traffic police forces along the road directing traffic."

He said there used to be fewer people taking taxis nearby.

"This also helps citizens travel better to a certain extent."

Turning their attention from the periphery to the rescue scene, piping blockage and stagnant water drainage are racing against time, and many people are busy running for hours without rest, striving to end this "battle" as soon as possible and restore people's normal life.

At 11:00 on May 18th, Qiantang District announced the latest progress - the cofferdam at the leaking place in Jinsha Lake Park has been built, the subway station has stopped water intake, and the drainage work is being accelerated.

This night, it was destined to be brightly lit, and many people could not sleep.

On the morning of the 19th, the drainage work was still underway.

At the same time, the reporter saw at the bus connection point of Jiuhe Road Station that on one side of the road, passengers in an orderly queue got on the bus one after another and went to their respective destinations; on the other side, there was a long queue in front of the bus station, one after another. A car carrying citizens who wish to travel by subway.

"Hello, how do I get to Yunshui?" "You get off at the subway entrance here and take a car across the road." Questions and answers like this were repeated at the connection point.

A subway staff member who was in charge of guiding the work at the scene told reporters that the connection points were in a state of continuous vehicles all morning, which well ensured the citizens to travel with peace of mind.

At the scene, there are many staff members who are responsible for guiding like him.

According to statistics, on May 18 and May 19, Hangzhou Public Transport Group allocated a total of 517 buses to support Metro Line 1, safely transporting about 63,000 passengers.

In the face of the sudden danger, Hangzhou, under the active organization and scheduling, strives to minimize the impact on people's travel.