China News Service, Chongqing, May 19 (Liang Qinqing) "'5.20' is coming, I bought a cat climbing frame for 'cat master' online in advance, and waited until May 20 to install it." It's different to spend the holidays with her boyfriend. Li Lulu, a white-collar worker born in the 1990s from Chongqing, chose to spend "May 20" with her cat this year, giving pets more "ceremony".   Because "520" sou 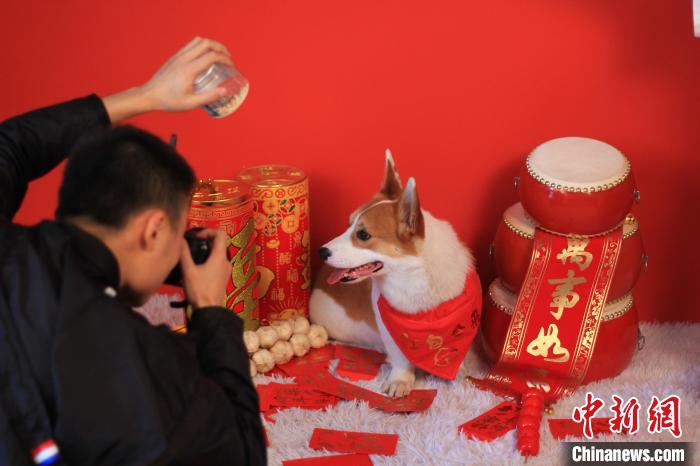 China News Service, Chongqing, May 19 (Liang Qinqing) "'5.20' is coming, I bought a cat climbing frame for 'cat master' online in advance, and waited until May 20 to install it." It's different to spend the holidays with her boyfriend. Li Lulu, a white-collar worker born in the 1990s from Chongqing, chose to spend "May 20" with her cat this year, giving pets more "ceremony".

Because "520" sounds like "I love you", May 20 is called "Internet Valentine's Day" by Chinese young people every year.

Nowadays, pets are the life "partners" of some modern young people, and their "family status" is getting higher and higher.

Many people prepare various gifts for their pets every holiday.

Brushing teeth, pedicures, grooming... Wen Jing from Chongqing is a "post-00". She "dressed up" her corgi early in the morning on the 19th, and brought it to a pre-booked pet photography shop for a photo shoot.

"The time that pets spend with us is very short, only more than ten years. Although it is only a part of our life, it is their whole life. I hope to freeze the moment of their life on the special day of '5.20', which is our joint fond memories.”

"It was frightened by another puppy when it was a child, which caused a 'psychological shadow', and it is easy to be frightened when it encounters a strange puppy when going out." In order to integrate the "supercar" into society, in early April 2022, Wen Jing put it Send it to pet school to exercise its courage.

"The school will teach it to prohibit jumping, fixed-point defecation, and prohibiting biting and other behaviors, and it costs about 3,000 yuan (RMB, the same below) in a month." She said.

Sun Liang, 26, the owner of a pet photography shop in Chongqing, is taking pictures of pet dogs.

"There are many people who keep pets now. For them, pets are the sustenance of their emotions." Sun Liang, 26, is the owner of a pet photography shop in Chongqing.

He told reporters that many customers will take artistic photos on their pets' birthdays, just like taking pictures of their children as souvenirs. Many customers are used to taking one set a year, and the repurchase rate can reach 30 to 40%.

"Now the pet photography on the market has been subdivided into two genres, one is for people and pets to take photos together, and the other is for pets." Sun Liang did the latter.

Shen Hongbing, a professor at the School of Economics of Chongqing Technology and Business University, said that the pet economy is a "lonely business" for young people, and the continuous younger consumer groups promote the prosperity of the pet industry.

Urban life is fast-paced, and having a pet can relieve work pressure. More and more young people are willing to invest time and money in pets.

With the gradual maturity of the pet economy, a series of upstream products and downstream services such as food supplies, foster care training, medical beauty, photography, and insurance have jointly created the entire "it economy" industrial chain.

In addition to investing money, today's pets have a stronger "accompanying" attribute. In new life scenarios such as self-driving and camping, pets such as cats and dogs are becoming more and more common.

"Behind the rise of the pet economy, people are craving for 'love' and 'company'." Zheng Hao, associate professor at the School of International Law and Society, Sichuan International Studies University, believes that with the development of the times, the meaning of pets to people is more than just pets .

The pet economy is essentially an emotional economy, which meets the realistic needs of young people's gradually escalating spiritual demands.

In the past, people domesticated animals more valued their practical attributes of housekeeping, but now many people regard pets as relatives or even children, and the "emotional attributes" of pets dominate.

Zheng Hao believes that in addition to emotional factors, the popularity of the pet economy also involves imitating successful and happy people. This means that many young people see that pet owners are happy walking their dogs and cats, so they imitate them. The appeal is the yearning for a better life.

Wen Jing said, "Now is the era of' pet friendly', and young people pay great attention to the sense of ritual. Some time ago, when the 'Supercar' celebrated its birthday, I personally made a birthday cake for it. The materials are broccoli, carrots, Yogurt, etc. When the epidemic is over, I will take it to the beach to play, let it see the outside world, and let it live without regrets." (End)