The UK has detected seven human cases of monkeypox. British health authorities are investigating the origin of these unusual infections of animal origin... 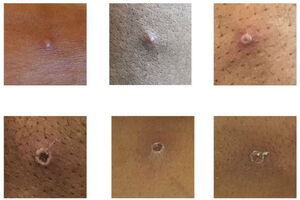 The UK has detected seven human cases of

The British health authorities are investigating the origin of these unusual infections of animal origin that have been diagnosed between May 6 and 15.

The first case was detected on May 7, in an individual who had recently traveled to Nigeria, where he is believed to have contracted the infection.

Subsequently, on May 14, two new cases were confirmed, unrelated to the previous one.

And this weekend, the authorities have reported the detection of four new cases (three of them in London and one in the northwest of England), with no connection to previous cases or history of travel to risk areas.

"The evidence suggests that there could be

However, the agency has stressed in a statement that the virus causing the disease

"is not easily transmitted"

, so the risk of contagion in the population is low.

The last four identified cases have been detected in men who defined themselves as gay, bisexual or men who have sex with men, say the British authorities.

What is the monkeypox virus?

Monkeypox is a rare viral infection.

The detected cases are usually associated with trips to

, where, despite the fact that it is a rare zoonosis, a greater number of affected people have been reported.

According to data from the World Health Organization, between 2017 and April 2022 in Nigeria, 558 suspected cases have been documented, of which 241 have been confirmed. Eight of them ended with the death of the patient.

So far this year, 15 cases of the disease have been confirmed (46 suspects).

"Specialists were already attentive to this disease because in recent months there has been a considerable increase in the number of cases in Africa," says Fernando de la Calle, a doctor at the

The main host for the pathogen, which belongs to the

family, is thought to be rodents, from where it can spread to humans, monkeys, and other apes.

How is monkeypox virus spread from person to person?

"Contagion to humans is unusual" and occurs mainly when humans enter wild environments and come into contact with animals or contaminated meat, explains

, treasurer of the Spanish Society of Tropical Medicine and International Health.

Generally, these cases of interspecies jump are self-limited, since the spread of the virus between people is not easy.

For transmission to occur, explains Faraco, there must be

with the infected person, with mucous membranes, the lesions caused by the disease or through thick drops of saliva.

similar to the one that caused smallpox

, a disease that has been considered eradicated in humans since 1980. "In fact, there is evidence that people vaccinated against smallpox have some protection against the monkeypox virus, due to like him", point out Faraco and De la Calle.

The majority of those affected by monkeypox, Faraco points out, do not suffer serious illness and recover in a few weeks, although in some cases it can be serious and leave sequelae.

What are the symptoms of this infection?

According to data from the World Health Organization, there are two lineages of the monkeypox virus, that of the Congo Basin and that of West Africa.

According to WHO data, at least the first identified case has been infected with this last lineage, whose lethality is around 1%.

In the case of the Central African lineage, a mortality rate of up to 10% has been documented.

Children and pregnant women are at higher risk of complications.

A characteristic rash may appear, usually on the face, which may spread to other parts of the body, including the genitals.

This eruption goes through different phases.

At first, the lesions resemble chickenpox, but later they become a scab that falls off.

The disease can be active for two or three weeks

and continue to be contagious until all the injuries are not resolved," says De la Calle, who recalls that these cases must be kept in high-level isolation units.

How is it transmitted from monkeys to humans?

"Human cases of monkeypox have been described since the 1970s," adds Faraco.

"What is striking about the UK case is that a link, a connection between the identified cases, has not yet been described."

outbreak of the disease in the US

"In that case it was discovered that the common link was prairie dogs that had been bred with infected rodents that came from Ghana and were then sold as pets," says the specialist.

At the moment, all the cases identified in the United Kingdom have been isolated and a study of their contacts has been carried out to try to find out the origin of the infection and stop possible new cases.

Given the identification of the latest cases among homosexual or bisexual men, the health authorities have particularly asked these groups to be attentive to any unusual injury or rash and to contact a medical service without delay in the event of any suspicion.

Both Faraco and De la Calle recall that "viruses have no borders, least of all in a world as globalized as ours."

Therefore, "it is important to be vigilant and have systems prepared to deal with new zoonoses."