Chinanews.com, Hangzhou, May 17th, question: Return the West Lake to the people to the end   The author is strictly Xie Panpan Tong Xiaoyu   Yesterday, Hangzhou City, Zhejiang Province held a public opinion discussion meeting on "West Lake style and cultural protection". At the meeting, cultural and historical experts, media, and other citizen representatives made speeches on how to further im 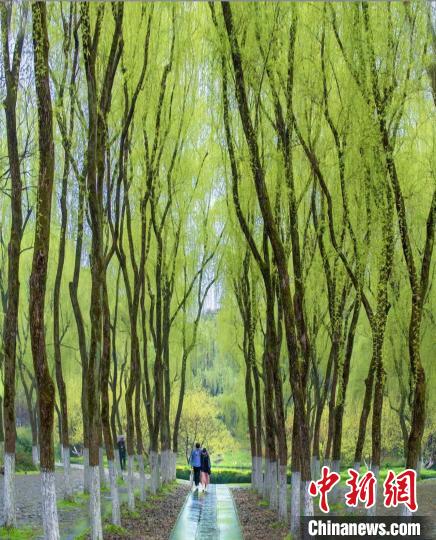 Chinanews.com, Hangzhou, May 17th, question: Return the West Lake to the people to the end

In yesterday's meeting, Liu Jie, member of the Standing Committee of the Zhejiang Provincial Party Committee and Secretary of the Hangzhou Municipal Party Committee, once again apologized for the occurrence of the willow transplanting incident along the West Lake.

This time Huanliu Yumin is also a benign interaction to practice the concept of Huanhu Yumin.

Willow trees smelling warblers in the willow waves of West Lake (photographed in 2020).

For many years, Huanhu Yumin has been a consistent "Tiantiao" in Hangzhou.

In the early 1980s, due to the dislocation of the city's development direction, the landscape function of Hangzhou West Lake shrank.

Of the more than 280 hectares in the Hangzhou Huanhu Road Circle, more than 80 hectares are occupied by various units and residents. These buildings are messy and dilapidated, with different styles.

In 1983, Hangzhou City decided to "demolition walls" and began to demolish houses on a large scale to restore green space and build green spaces around the lake.

Li Dexin, then secretary of the Hangzhou Municipal Party Committee, once told reporters that it was extremely difficult to return the lake to the people. At that time, many homes and units around the West Lake had backgrounds and backgrounds, but the city of Hangzhou insisted that it would break ground on the "Tai Sui".

He believes that Huanhu Yumin has a "background" and confidence - this project has won the hearts of the people from the very beginning. It is a good deed for citizens, tourists, and future generations, and it is also the will of the people.

After renovation, Hangzhou West Lake No. 1 Park has been along the lake to the lakeside line of Xiling Bridge in Jinghu Hall, with green grass and sparse flowers and trees.

After several comprehensive protections and renovations, in April 2003, all green spaces and landscapes along the West Lake were opened to citizens and tourists free of charge, and the return of Hangzhou West Lake to the people was realized.

Entering the new era, the special renovation of Hangzhou West Lake Club can be regarded as a landmark event in the construction of local style and the return of the lake to the people.

According to the China Disciplinary Inspection and Supervision News, in 2013, a map of "Clubhouse West Lake" and "Private West Lake" became popular on the Internet. Nearly 40 clubs near West Lake occupy the out-of-print scenery of West Lake.

Those who go in and out of the clubhouse are either rich or expensive, and the participation of public officials not only separates them from the masses, but also encourages extravagance.

It is understood that the West Lake Clubhouse, which was inaccessible to idlers in those days, has now become a public place such as a teahouse, a calligraphy and painting academy, and a museum.

Hu Hongwei, deputy editor-in-chief of The Paper, attended the forum yesterday. He believes that Hangzhou has a good historical tradition of respecting public opinion.

Hangzhou can use the transplanting of willow trees along the West Lake as a reference and window for the modernization of social governance, and accumulate fragments that can be remembered and recollected in the future.

From the high-profile renovation of the West Lake more than 40 years ago, to the recovery of the seven willow trees today, there may be no more "big things" for the people in the lake, but there are no small things in the West Lake, and the people have put forward more suggestions for the protection and inheritance of the cultural landscape of the West Lake and the World Cultural Heritage of the West Lake. With high requirements, Huanhu Yumin in the new era also has a new connotation.

This requires the managers of West Lake to further refine the granularity of management, so that decision-making has more humanistic considerations and public opinion basis, and through the new governance pattern of co-construction, co-governance and sharing, the love and wisdom of the people can truly become a valuable resource for West Lake governance. .

Liu Jie, secretary of the Hangzhou Municipal Party Committee, also said yesterday that it is necessary to draw inferences from one case to another, establish rules and regulations, and continuously improve the modernization level of the governance system and governance capacity.