[Report File] What do the Academy Awards and the Baeksang Arts Awards have in common? 'I love you' sign language

I watched this year's Baeksang Arts Awards more diligently than ever before. The public's attention was focused mainly on the TV and film categories, but I was looking forward to the theatrical awards. 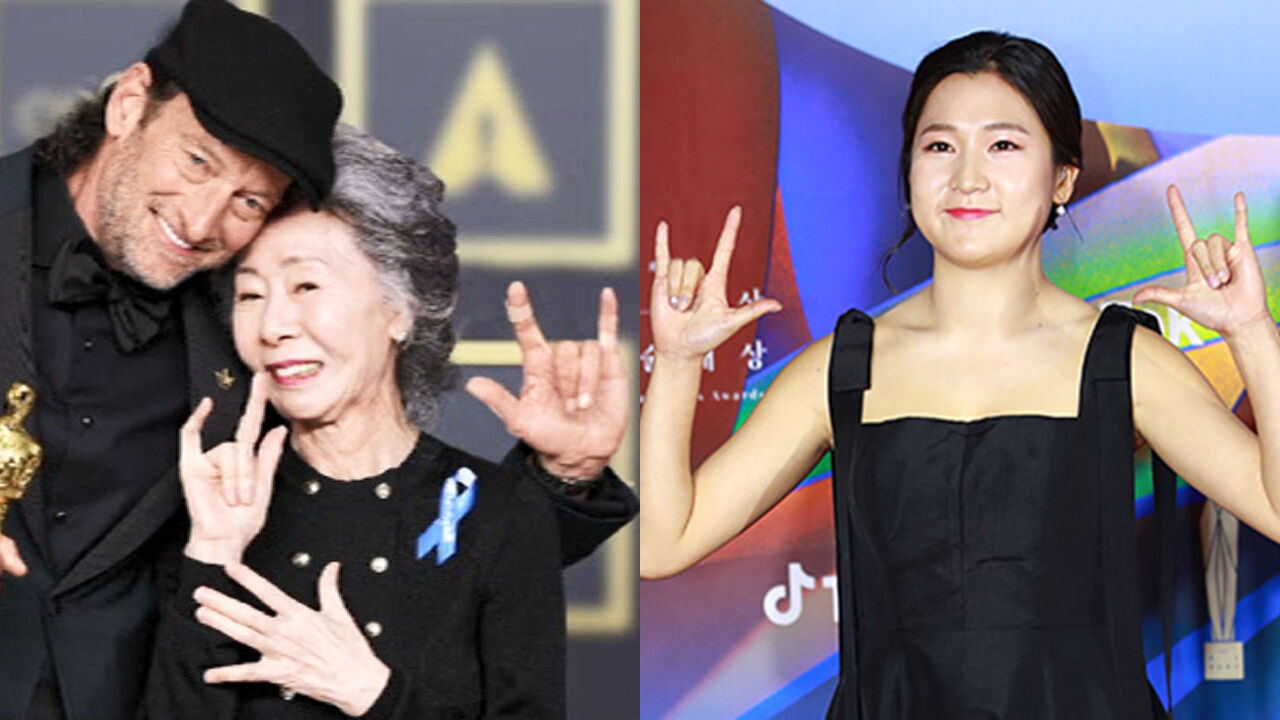 I watched this year's Baeksang Arts Awards more diligently than ever before.

The public's attention was focused mainly on the TV and film categories, but I was looking forward to the theatrical awards.

Although it doesn't get as glamorous as TV or movies, the Baeksang Arts Awards also awards theater categories.

The category I was interested in was the Best Actress category among plays.

A meaningful record came out in this year's Baeksang Arts Awards for Best Actress in a Play.

Actress Park Ji-young is the first deaf actress to be nominated for an acting award.

Park Ji-young gestured 'I Love You' whenever she was caught on camera at her red carpet event and just before the announcement of her winner.

Watching this scene reminded me of the sign language I saw at this year's Academy Awards.

In the Best Supporting Actor category, which was awarded by Yeo-Jeong Yoon, it was initially wrongly known that Mr. Yeo-Jeong Yoon 'named' the winner in sign language.

But the truth is, it was not the name of the winner, it was meant to express this 'I love you'.

This action is a combination of the letters I, L, and Y in American sign language to mean 'I Love You', and it is used so many times that it has been registered as an emoji on social media sites such as Facebook and WhatsApp.

It also appears on the poster for the movie 'Coda' starring Troy Coach.

'Coda' warmly depicts the growing up of Ruby, the only blue man in a deaf family.

In addition to Coach Troy, deaf actors such as Marley Matlin (the first deaf actress to win an Academy Award for Best Actress in 1986 for 'Children of a Little God') and Daniel Durant all played deaf characters.

About 40% of the script was written in sign language.

At this year's Academy Awards ceremony, you will not be able to forget the 'I love you' sign language shown several times by the cast of 'Coda' and the quiet but sparkling applause of the audience.

There are also deaf troupes and deaf actors in Korea.

Compared to the United States, where traditional deaf troupes and actors are active, it is true that the reality of Korea is still poor.

In Korea, deaf characters were also entrusted to hearing actors (as if they were learning a foreign language that the actors did not know and acting as if they were their mother tongue), and there were very few cases in which subtitles or sign language interpretation for the deaf audience were supported in performances.

However, in recent years, performances by the disabled and non-disabled people have been increasing, centered on national and public organizations, and the activities of disabled artists have become more active.

In particular, the National Theater Company has presented a series of performances on the theme of disability this year.

One of them, 'This is a story of failure, originally titled Into the unknown (to the unknown, not Elsa)' is a 'documentary' play that depicts the process of making a performance between a deaf and a hearing person who speak different languages.

Park Ji-young, who appeared in this performance, was nominated for the first acting award for the deaf.

Ji-Young Park did not receive the award.

(The winner of this category was Hwang Soon-mi of 'Hongpyeong Gukjeon').

However, director Kim Mi-ran received attention for this play as she received the Young Play Award at the Baeksang Arts Awards.

'This may be a story of failure', but it was also a process for people who speak different languages ​​to get to know the world they belonged to and the unknown world.

A sign language interpreter was always involved in the making of this play.

Some say that it is difficult to bear the burden of additional manpower and budget as the reason for the difficult activities of the deaf actor.

So, until there is an atmosphere where the use of a sign language interpreter and a deaf actor is considered an exceptional and necessary task rather than an additional burden, it is necessary for the national and public organizations to take the lead in such an attempt.

Park Ji-young is an actress from Handspeak, an art group for the deaf.

Handspeak is a group I got to know about while covering the sign language play 'Disappearing People' at the Sejong Center for the Performing Arts in the early days of Corona.

Handspeak is composed of about 20 deaf artists who are engaged in various activities such as actors, dancers, and directors.

Jiyeon Kim, a member of Handspeak, who directed this video, couldn't understand a single line while watching the musical 'Hero', but was deeply moved by this performance and covered the main part of the performance, 'Who is a Sinner' in sign language, giving her confidence to many people. He said he wanted to convey this feeling.

Park Ji-young left a deep impression by playing the role of Ahn Jung-geun in this video.

(Many deaf artists complain of not being able to properly see performances that others enjoy easily. It is extremely rare for performances with subtitles or sign language interpretation to be provided. So Jiyeon Kim asks if she can preview the script when she goes to see a musical. In addition, Park Ji-young said that in the play 'Lack of the Name of Family', which was performed at the National Jeongdong Theater recently, not only entrusted the character of the deaf who uses sign language to a blue actor, but he actually did it. The deaf audience who used it raised a problem saying that there was no way to see the play. The production company, which initially said that it was difficult to provide subtitles for the deaf audience, introduced the subtitle service only when this fact became known and criticism was created.)

Among the articles pouring out after the Baeksang Arts Awards ceremony, none of them paid attention to the deaf actor who first attended the awards ceremony as a nominee.

Of course, it would have been different if Park Ji-young had won her award.

I reported the story of Ji-Young Park on SBS 8 News, thinking that, regardless of whether she won an award or not, this year's Baeksang Arts Awards ceremony had a meaningful record in the theater category.

Park Ji-young opened a new chapter with her first nomination, and other deaf actors are also active, so I expect that the day will soon come when you will see the sign language award remarks and sparkling applause at the Korean awards ceremony.