"A family of three" is the most "square"! The ugly face of the national character "Monkey Brother" became popular

On May 16, a monkey in a zoo in Zhejiang was on the hot search because of its national character face. Many netizens wondered how there could be such an ugly monkey, "It seems like my colleague with a beard" "It won't be a job. Are people pretending to be?" Some people also questioned whether the hot video used face-changing technology for monkeys, and there was a lot of discussion on the Intern 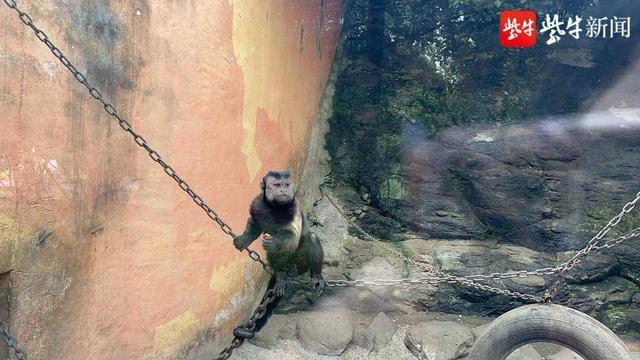 On May 16, a monkey in a zoo in Zhejiang was on the hot search because of its national character face. Many netizens wondered how there could be such an ugly monkey, "It seems like my colleague with a beard" "It won't be a job. Are people pretending to be?" Some people also questioned whether the hot video used face-changing technology for monkeys, and there was a lot of discussion on the Internet for a while.

On the afternoon of the 16th, a reporter from the Yangtze Evening News learned from the Shaoxing Tiger Zoo that the monkey in the video was the black-capped hanging monkey introduced by the park in 2018.

"There are a total of 3 monkeys like this in our park. They all look different. Only this one has the most square face. This one is more like a human. He and Yuan Fang were surprised by the popularity of the black-capped monkey.

The beard on the face is a real beard!

The longer and more square "Monkey Brother" has become a father

The popularity of the square-faced "Monkey Brother" came from a video posted by a tourist on a short video platform.

In the video, "Brother Monkey" is sitting on the tire swing, looking at the tourists suspiciously. His eyebrows, bangs, beard and Chinese character face make it difficult to associate with the usual monkey image for a while.

"This type of monkey is called the black-capped monkey because the hair on its head looks like a black hat, and the population is mainly distributed in South America." Master Jiang, the breeder who has been taking care of it, told the Yangtze Evening News reporter that the black-capped monkey belongs to Endangered animals, when the zoo introduced this species in 2018, it has undergone many professional and strict audits.

Mr. Jiang has been with Fang-faced "Monkey Brother" for more than four years, and he has seen him form his own family from a little monkey to now.

"It has a 'wife' and a 'child', but neither the little monkey nor the mother monkey has a square face." In Master Jiang's memory, the square-faced "Monkey Brother" also had a pointed chin like other monkeys when he was a child. "Later It becomes more and more square as it grows up, which is also a manifestation of its maturity.”

What also attracted the attention of netizens was the special bearded circle of the square-faced "Brother Monkey", and many people also thought of their friends because of this.

"That ring of beard is not ordinary hair, it's a moustache like a human beard."

Master Jiang told reporters that in addition to his appearance, the square-faced "Monkey Brother" is also similar to humans in behavior. For example, he will simply use some tools to eat nuts, and he will carry it carefully on his back when taking care of the cubs. pamper.

Master Jiang told the Yangtze Evening News reporter that with the popularity of the square-faced "Monkey Brother" on the Internet, the number of tourists in the zoo has increased, which has added a lot of popularity to the zoo.

Now with the increase of tourists, Master Jiang is also closely observing the reactions of the black-capped hanging monkeys.

"Because it has been domesticated in the zoo since childhood, it is not afraid of people, but I am still worried that some tourists will make uncivilized behaviors to frighten the monkeys."

Chen Zhiyang, a contributor to the "Nuwu" magazine and the co-translator of the Red Mountain Zoo, told Ziniu News that the official Chinese name of this Internet celebrity monkey is the black-capped monkey, or more formally, the black-capped capuchin monkey. It is very common in South America, and maybe this one looks more peculiar, so it has attracted the attention of Chinese netizens.

Chen Zhiyang said that the black-capped hanging monkey belongs to the genus Capuchinidae in the primate order Capuchinidae. There are 12 species of monkeys in this genus. kind.

They got this name because they have a tuft of black hair on their heads, much like the hats worn by priests in the Middle Ages in Europe.

Black-capped monkeys are listed in Appendix II of the Convention on International Trade in Endangered Species of Wild Fauna and Flora with a status of "Least Threatened", but their trade is controlled to prevent them from being exploited for their survival.

The reporter learned that the newly built Gondwana Pavilion at the Hongshan Forest Zoo will be opened soon, and the black-capped hanging monkey will be introduced. At that time, this kind of "black-capped" monkey can also be seen in Nanjing.