Turkey and Saudi Arabia.. What after Erdogan's visit?

On the 28th and 29th of last April, Turkish President Recep Tayyip Erdogan made an important visit to the Kingdom of Saudi Arabia, which came after a state of semi-estrangement between the two countries in the past few years. 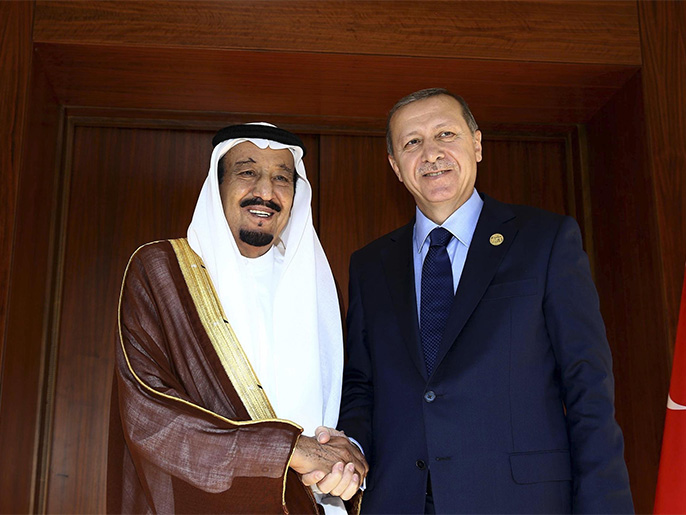 On the 28th and 29th of last April, Turkish President Recep Tayyip Erdogan made an important visit to the Kingdom of Saudi Arabia, which came after a state of semi-estrangement between the two countries in the past few years.

Historically and for decades, the relations between the Turkish Republic and Saudi Arabia were not at their best, for historical, cultural as well as geopolitical reasons, among them the great differences in the state structure, system of governance, religion-state relationship, regional alignments and other reasons.

This changed relatively with the rule of the Justice and Development Party in Turkey, and the visit of the late King Abdullah bin Abdulaziz in 2006 to Turkey inaugurated a new phase between the two countries, but the revolutions of the Arab Spring and the events that followed - particularly the coup in Egypt - brought back apathy and deepened the dispute again between them and put them in Two opposing sides in the equation of regional polarization, and sometimes in an undeclared and indirect confrontation in a number of issues and files in the region.

Two additional reasons have been added to this main factor in the past few years, the first of which is the Gulf crisis in which Turkey sided with Qatar politically and economically, albeit not in a sharp confrontation with Saudi Arabia, although Riyadh saw this as an alignment and intervention against it.

Last January, Erdogan said that he was about to visit Saudi Arabia the following month without that happening, which suggested that the conditions were not yet ripe for its completion, or that Saudi Arabia had preconditions.

Ankara's closure of the journalist Khashoggi's case suggested that the visit was imminent, regardless of whether the matter was in response to a Saudi condition or a Turkish initiative.

The second is the case of the killing of Saudi journalist Jamal Khashoggi in his country’s consulate in Istanbul, where Turkey insisted for years to reveal its circumstances and hold all those involved in it accountable, which Riyadh considered defamation and targeting, although Erdogan himself denied - in more than one statement - that his country’s position is directed. Against Saudi Arabia, a state or a people. In some of his statements, he even mentioned his confidence in the royal family in Saudi Arabia and King Salman in particular.

Today, it can be said that the three files have declined significantly;

The Arab Spring and its repercussions have become behind the backs of regional powers, the Gulf crisis ended at least officially with the Al-Ula summit, and the Khashoggi case was recently brought back by Ankara to the Saudi judiciary, after it announced last year its support for the rulings issued in Riyadh against the accused.

Erdogan's visit also comes in the context of his country's rapprochement - or at least its communication - with a number of its opponents over the past years, led by the UAE, Egypt, "Israel", Armenia and Greece.

It is a path driven by a number of international, regional and local causes and developments, such as the new US administration and its orientations regarding the region and its allies in it, the possible agreement between Iran and the international community regarding its nuclear project, the repercussions of the Corona pandemic, then the Russian war in Ukraine on the economies of the region and the world, and finally the pivotal elections that Turkey awaits In June 2023.

Turkey and Egypt engaged in several rounds of dialogue, interspersed with some procedures and decisions that were classified as goodwill measures. Abu Dhabi Crown Prince Mohammed bin Zayed visited Ankara before Erdogan visited the UAE, and Erdogan received Israeli President Isaac Herzog and Greek Prime Minister Kyriakos Mitsotakis, but A visit at this level with Saudi Arabia was delayed.

Last January, Erdogan said that he was about to visit Saudi Arabia the following month without that happening, which suggested that the conditions were not yet ripe for its completion, or that Saudi Arabia had preconditions.

Ankara's closure of the journalist Khashoggi's case suggested that the visit was imminent, regardless of whether the matter was in response to a Saudi condition or a Turkish initiative.

What is remarkable is that Saudi Arabia remained the last in the group of the Egyptian Gulf alliance, rapprochement with Turkey, or at least a meeting of its officials, which some attribute to its conservative policy on the one hand and its desire to wait and examine the path on the other hand.

In addition, the announcement of the visit came from the Turkish side exclusively, and the Saudi media did not celebrate it or deal with it extensively until later, unlike the Turkish media. Rather, the Saudi “Al-Ekhbariya” channel was keen to report the news that the visit came “in fulfillment of the desire” of the Turkish president and not "At the invitation" of King Salman, as the latter said.

These indications show that Ankara was more enthusiastic about the visit than Riyadh, and that the visit did not necessarily take place in the best circumstances, and that the contentious or outstanding issues between the two countries are difficult to overcome once the visit is completed, despite its undisputed importance and implications.

So the most important question is about the future, not the past.

The economy is the most prominent title of the visit and the most important target, according to the advertiser.

Erdogan said that he hopes that the visit will open a new page in the relations of the two countries and contribute to the development of trade and economic relations between them. He also stated that the two sides agreed to "reactivate great economic potential with the organizations that will bring our investors together with the Kingdom of Saudi Arabia."

Therefore, it can be said that the most prominent Turkish goal at the current stage is to rotate the angles of conflict with the "enemies" and transfer them to the space of "friends", according to official statements, in a way that reduces foreign policy challenges, relieves pressure on Turkey and disrupts the alliances facing it in the region.

It is also not expected that the development of trade relations with Saudi Arabia and the rest of the parties will be the final and effective solution to the problems of the Turkish economy, although direct investments benefit in several areas, including contributing to the strengthening of the lira by providing hard currencies.

The clear laconicism in the statements that followed the visit indicates that what was accomplished during it may not be significant, which casts shadows of ambiguity about future tracks, but this does not diminish the importance of the visit nor the extent of the breakthrough represented in relations.

The number of controversial files and their size suggest that the path of rapprochement between the two countries will not be fast, similar to the path of dialogue between Ankara and Cairo.

One of the most important indications on the future prospects for relations between the two countries after the important visit is whether or not a high-profile Saudi visit to Ankara will take place, its timing, and the signs and statements that will precede and accompany it.

Such a visit seems likely in light of Saudi Arabia lifting the ban that was unofficially imposed on Turkish goods, according to Turkish media, as well as Turkey lifting the ban on Saudi and Emirati media outlets during the past months.

But the last, and most important, question that arises in this context is whether Saudi Arabia and the rest of the regional parties are keen to speed up the restoration of relations with Ankara and the development of intra-regional trade with it now, or whether they are taking only initial steps and will remain awaiting the results of the upcoming Turkish elections, or at least Estimating its initial precursors and its electoral campaigns to decide its next steps, a question that defines the coming months.