Ghent, why these days it becomes the spectacular European capital of flowers

Alona Malafeieva puts the finishing touches on her stand at the International Congress Center (ICC) in Ghent. She has arrived just two days ago directly from Brussels, where she is... 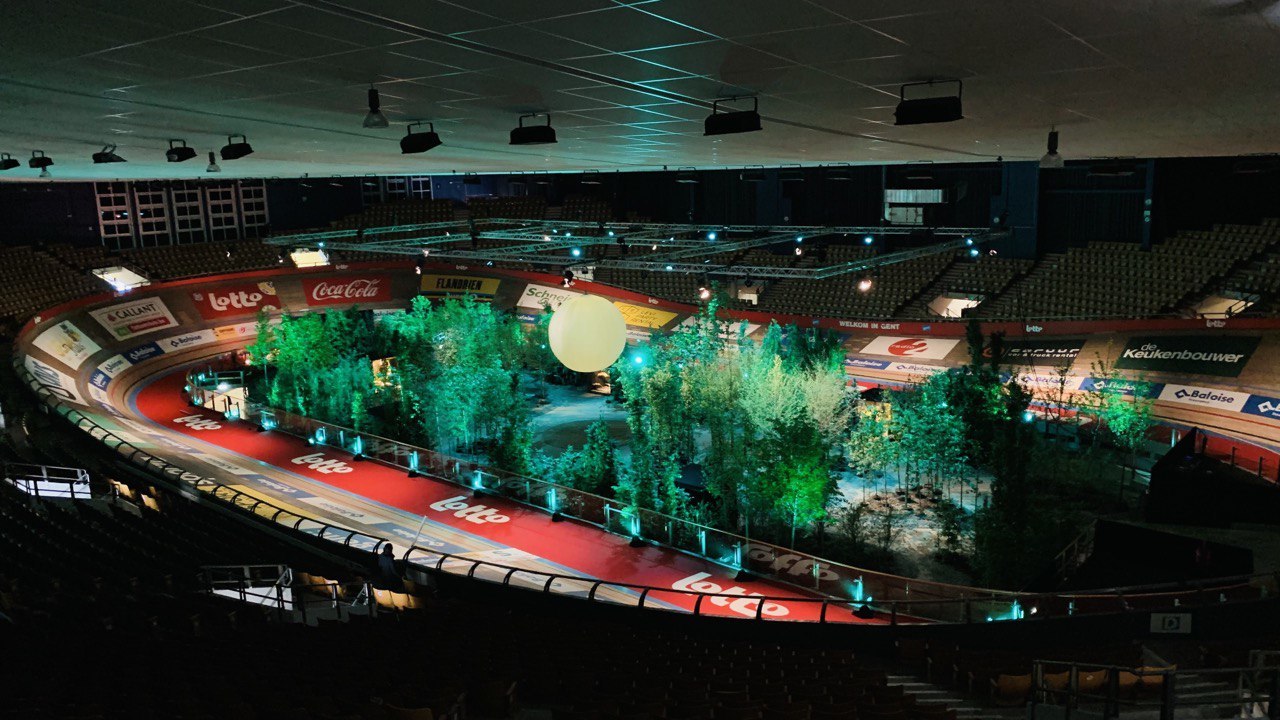 the finishing touches on her stand at the International Congress Center (ICC) in Ghent.

She has arrived just two days ago directly from Brussels, where she is a refugee after escaping from the war in Ukraine.

She is one of the floral artists participating in

, a centenary meeting, which can be visited until May 8, where florists from all over the world show their creations and the latest advances in sustainability, research and innovation.

[Gallery: the best of Floralia]

Malafeieva was the last to arrive, but her colleagues have spent days preparing the stands that the Belgian king and queen inaugurated.

"We have been preparing for two weeks," explains

, one of the organizers, as he finalizes the details of the building, designed and built in the 1970s by the architect Bontinck.

Among these artists, the Spanish

, who has brought 400 bamboo canes from his nursery in Galicia with which he has assembled his installation.

With this plant they are investigating how to alleviate the effects of climate change.

"It's useful against global warming," he explains as he puts the finishing touches on his gigantic exhibit.

Florists from Belgium and from a dozen other countries participate in this exhibition that shows the strength of the industry in Europe.

The inspiration for this year's edition, which should have been held two years ago, but the covid prevented it, is the

' altarpiece 'Adoration of the mystic lamb', a piece with a religious theme but where botanical experts have managed to identify more than 70 different species.

A forest inside the Kuipke velodrome, home of Six Day Racing.LB

'My paradise, my earthly garden'

, they pay tribute to the work that rests in the Cathedral of San Bavón, a few kilometers from the Convention Center and the Kuipke Velodrome.

of cycling has given its facilities during these days to a small forest of trees.

It is just a sample of how flowers or trees can always be present in our lives.

"There is always time for flowers: from the moment we are born until we die, there is always a flower that symbolizes some stage of life", summarizes

The first edition of this exhibition was held in 1808 and 48 plants were exhibited.

, which has its own designation of origin and where 80% of European production grows, is the star flower.

Its aroma not only spreads through the historic ICC site.

Dozens of shops participate in

or present exclusive creations that can only be enjoyed during these days.

Even Saint Bavo's own cathedral, 'flooded' with thousands of flowers these days thanks to one of the city's horticultural schools.

The son and grandson of bakers, he decided to turn his family's career around and open a chocolate shop a few steps from the cathedral.

In his workshop, overlooking the street, he has made chocolates for the 2022 Floralia. "We have used

" he explains while holding a small and delicate purple chocolate.

A few minutes walk away is Miglot,

Fragrance designer, I have created an exclusive for this event.

"It takes a year to make a perfume from scratch," he explains before uncovering Formula 30, the fragrance that "concentrates" his conception of paradise in a bottle.

"We don't put names to perfumes so as not to condition," he clarifies.

In this creation, "which evolves throughout the day" and in which "paradise makes its way", he has used

bergamot, lemon, jasmine or lily of the valley flower

There is also the possibility of literally drinking the flowers.

Dok Brewgin, a brewery from Ghent, has brewed a Belgian wheat beer exclusively for this edition of Floralia.

one of its founders.

For its elaboration they have

"Just enough so that the flavor is present but not too intrusive," she explains.

For those who prefer the plate to the glass, the organization of the Floralia has also thought of them.

Ice creams, dumplings or complete menus are some of the proposals offered by various establishments in the city.

Several chefs, such as those of the Lepelblad or Alix restaurants, have created a

inspired by this garden: vegetables and edible flowers fill the dishes for those who, in addition to seeing and smelling them, also want to eat them.

How to get there:

From Madrid there are daily flights from 75 euros

, a small family hotel on the banks of the River Lys and a stone's throw from Gravensteen Castle.

From 145 euros per night