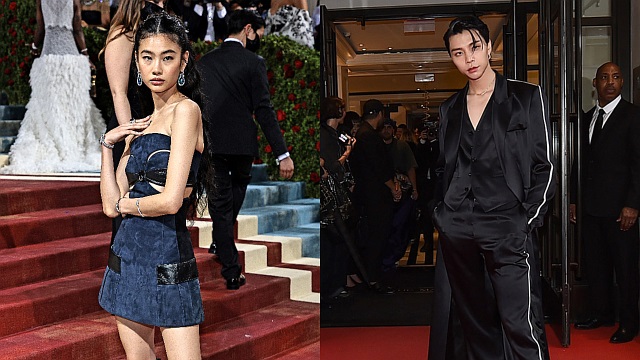 Yesterday (2nd) local time, the '2022 Met Gala' event was held at the Metropolitan Museum of Art in New York, USA.

The 'Met Gala' selects a specific costume theme every year and invites celebrities from all over the world.

The theme of this year's Met Gala is 'In America: An Anthology of Fashion'.

On this day, Jung Ho-yeon wore items from a luxury brand from head to toe.

She showed off a unique mini dress with a cut chest underline, a silver trunk-shaped clutch and knee-length boots.

Prior to her event red carpet, Jung Ho-yeon caught her attention when a pictorial taken with Hollywood actors Emma Stone and Renat Reinzeb was released through the brand's SNS account.

Previously, the brand recognized Jung Ho-yeon's stardom through Netflix's original 'Squid Game' and selected him as a brand global ambassador.

As a global ambassador, Jeong Ho-yeon clearly showed the side of a 'fashion icon' by decorating the opening and finale of the fashion show held in Paris in March, and decorating the cover of American Vogue for the first time in Asia.

American fashion magazine W also introduced Jeong Ho-yeon as one of the 'Best Dressed Stars at the 2022 Met Gala' along with Emma Stone and singer Billie Eilish.

On this day, NCT Johnny was the only K-pop artist to shine.

Johnny, the first group member to attend, chose a black silk suit made by a Vietnamese-American designer for the event.

Johnny also met models Gigi Hadid and Jeong Ho-yeon through the 'Met Gala' and spent time together, and shared photos taken together on social media.

Shortly before the event, he enjoyed the event with Chloe Kim, a Korean-American who won the Winter Olympics in snowboarding for the second time in a row.

Held annually on the first Monday of May, the Met Gala is a charity fundraising event hosted by the Costume Institute of the Metropolitan Museum of Art in New York.

This year, in addition to Jeong Ho-yeon and Johnny, it was successfully held with a gorgeous lineup including Justin Bieber, Timothy Chalamet, and Kim Kardashian.