[Ten years @every struggle for you] Anhui "post-90s" messengers run all year round on the top of Mount Huangshan, with a daily walking delivery mileage of 12 kilometers

Editor's note:   Every Chinese who works hard to live is the most beautiful struggler. It is precisely because of hundreds of millions of strugglers that China is today. For ten years, pay tribute to every struggle of you. Let us work together to forge ahead in the new era, and work hard towards the future.   China News Service, Anhui Xiuning, April 30th: Anhui "post-90s" messengers run all th 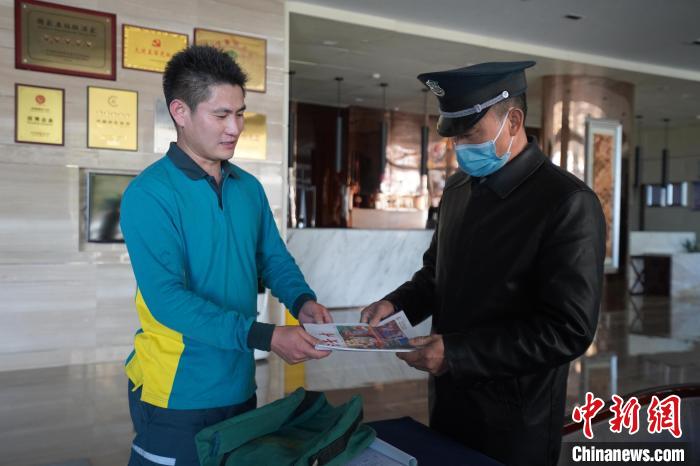 China News Service, Anhui Xiuning, April 30th: Anhui "post-90s" messengers run all the year round on the top of Huangshan Mountain and have a daily walking delivery mileage of 12 kilometers

Among the mountains with an altitude of more than 1,000 meters, a green figure shuttles back and forth, running around 33 delivery points in the 160-square-kilometer scenic spot of Huangshan Scenic Area. Every year, the mountain travels more than 5,000 miles, and it goes up and down Huangshan nearly 300 times. It is a scenic spot staff and tourists. "The most beautiful cloud messenger" in my mind.

In 2022, Xie Feijun won the honorary title of "National May 1st Labor Medal".

At 8:10 a.m. on the 29th, at the Tangkou delivery class of the Huangshan District Postal Branch at the foot of the Huangshan Scenic Area, Xie Feijun, who was about to go up the mountain, packed three large parcels of newspapers, magazines, ordinary mail, registered mail, etc. that were to be delivered that day. Add up to 70 pounds.

Trying to pick it up is quite laborious.

With the heavy postal package on his back, Xie Feijun set foot on the step-by-step postal route.

"In the beginning, I just wanted to find a stable job close to home." Xie Feijun said.

In 2016, in order to take care of his elderly parents at home, 24-year-old Xie Feijun decided to return to his hometown to work and become a courier in the Tangkou Postal Delivery Class.

The delivery section of Huangshan Scenic Area he is responsible for is the highest delivery section in Anhui Province. The service area includes not only the market supervision office, comprehensive management, police station, garden and other offices under the jurisdiction of the Huangshan Management Committee, but also hotels, hotels, ropeways and other offices. In many units such as newspapers, books, invoices, and official documents, the delivery volume is large, and the messenger is particularly important.

However, the Huangshan Mountain Road is rugged and inconvenient to drive, only walking.

Therefore, climbing mountains to deliver letters has always been the hardest job for the local postal department.

"This position has to carry hundreds of kilograms of newspapers and magazines to climb mountains every day. Most people are reluctant to do it, and it is especially difficult to recruit people." But Xie Feijun insisted on gritting his teeth. The daily walking mileage is 12 kilometers, and the steps are nearly 16,000 steps. One postal service was delayed and one mail was lost.

At 9 o'clock, Xie Feijun arrived at the Yungu Cableway in Huangshan Scenic Area, and took the cable car up from here, and then began to deliver the goods on foot for about 12 kilometers.

In order not to delay the delivery of the mail, Xie Feijun trotted all the way, carrying three parcels with a total weight of about 70 pounds, and climbed the mountain road steadily and quickly.

Walked from the cableway entrance to Beihai Sanitation Office Station, put down the parcel, took out the newspaper, and delivered it to the staff on duty. In two minutes, Xie Feijun completed the delivery skillfully; he didn't care to wipe the sweat off his forehead, and continued to carry the parcel on his back. He hurried again. Go to the next stop.

Near noon, Xie Feijun reached the Guangmingding Villa in Huangshan Mountain at an altitude of 1860 meters after the most difficult section of nearly 1,000 meters of stone steps.

"I don't have a fixed location for lunch every day. I eat wherever I go." Because there was still an email to deliver, Xie Feijun ate fast, three dishes and one soup.

As the only messenger at the top of Mount Huangshan, Xie Feijun was full of expectations from "people in the mountains".

The staff of the scenic spot live on the mountain for a long time and rarely have the opportunity to go down the mountain. Xie Feijun not only brought them newspapers and books, but also helped to bring some necessities of life to solve their urgent needs.

"It's very inconvenient for them to go up and down, and it's a big effort for me." "Xiao Xie is here!" "A letter delivered again!" Along the way, sanitation workers, mountain pickers, and office staff greeted Xie Feijun warmly.

"Xie Feijun can bear hardships and be enthusiastic, and everyone admires him." The staff praised him one after another.

"Seeing everyone's smiling faces and affirmations, no matter how hard or tired you are, you have to persevere." Xie Feijun said that he has been sticking to his job, not only because of the heavy responsibility on his shoulders, but also because of the beautiful scenery on the mountain, simple and enthusiastic "Mountain people" moved.

Summer, summer and winter are cold. Xie Feijun's sweat and footprints are left in every corner of the mountain throughout the year: when the ropeway is out of service, he has to walk an extra 6.5 kilometers on foot up the mountain, which is equivalent to walking a half-marathon; the weather on the mountain is changeable. , In order to protect the mail, he took an umbrella to climb the mountain in rainy days. He ran down and soaked all over, but he gritted his teeth. As long as he didn't fall badly, he would get up immediately and move on, because he knew that the parcel contained not only mail, but also a responsibility.

In addition to delivering the packages, Xie Feijun also takes the invoices, registered letters and items left by the guests off the mountain every day.

"During the epidemic, there were few tourists and there were not many postcards. Like the original tourist season, there were four or five hundred postcards every day, and one parcel could not fit."

"Since I have chosen this industry, I will continue this task of mountaineering and mail delivery." Xie Feijun said.