The Anthill | Carlos Alcaraz, a sea of ​​sincerity

"The one you've rolled in a year! You've gone from being 120 to 9. Not even tequila goes up that fast." This is how Pablo Motos started the most anticipated interview of the week in El... 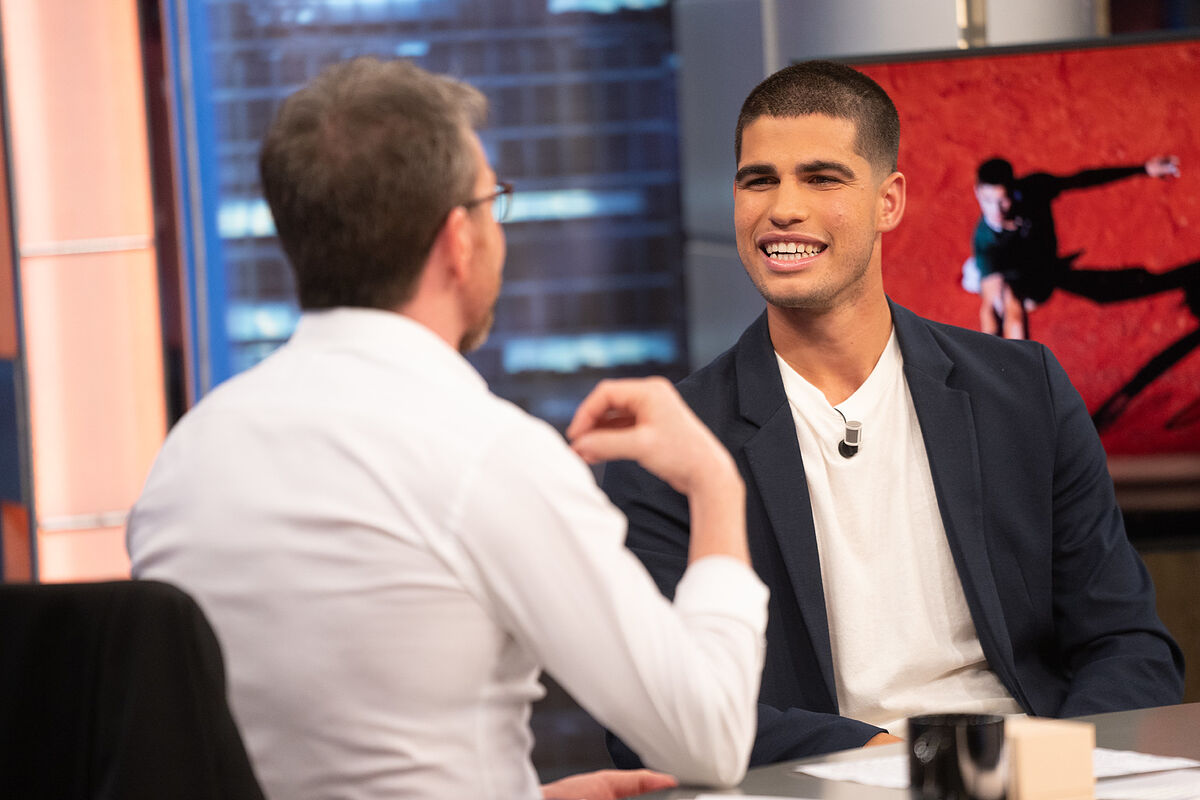 This is how Pablo Motos

the most anticipated interview of the week in

Indeed, the one that

has bundled up in a year , how not to be the most anticipated interview!

It is not only that everything related to

generates an impressive interest, it is also that it was the first time that

sat on a set, in an entertainment program and in prime time.

He had to play yes or yes.

And he gave it.

Despite the fact that his coach,

, closely watched each question and each answer -remember that

is 18 years old-, the tennis player, champion of

partially broke that armor that covers to most of the elite athletes and allowed to discover not only the new and great promise of tennis, but also that 18-year-old boy, who when he goes out partying, even if it is little, drinks "gin with lemon".

And how does it take for an 18-year-old to become a sports star overnight?

"I get along quite well. I tell everyone that I don't consider myself famous. When they recognize me, I take it naturally."

In fact, as he himself confessed last night in

, when he goes to his town, he forgets that he is a tennis player.

He hasn't lost his adolescence either.

Academy and, obviously, he has lost the party nights that are so linked to his age, but nothing more.

"I haven't lost anything. Obviously I've lost partying, but nothing else (...) Yes, of course I've gotten drunk at some point."

And he doesn't lie, after winning the

was able to go to rest, but, as any boy his age would do, he went to celebrate with his friends.

Friends who, by the way, hesitate because of his fame: "When they go out and have one more drink, they are usually funnier than they should be."

What does Carlos Alcaraz say to himself to win?

, he revealed it last night, and he calls himself many times or, at least, when he is about to win, when he is at that final point, in which he will become the winner and the one that is always done more uphill: "There are many times that I say,

, because I call myself

, do magic and try to finish with a bang."

"Make magic and try to finish in a big way..." And the set of

It is not for less.

did in the Godó Tournament.

He played a semi-final over three hours in the morning, rested for two hours and won the final.

And that nobody, apart from his team, knew what really happened to him that day.

According to what he said last night, he got up with "the left foot".

. It wasn't much, but I hurt my soleus. I was overwhelmed by whether I could play or not, but with the adrenaline of the game it's over," revealed the tennis player.

And during the two hours of rest?

"In that two short hours I slept a half hour nap (I sleep anywhere), I ate, I did 20 minutes of cycling after the game and I played the final".

is known, but what is

really like, how does he manage that fame, success, how has he evolved since he entered the

Academy at the age of 15 until now, how does he reconcile being the great promise of tennis Spanish and be 18 years old, and earn a million dollars after proclaiming himself the winner

of the Miami Master

Well, as an 18-year-old boy, who a year ago had as his main goal in life "getting my driver's license."

"Obviously my parents control my money. To buy me some golf clubs, which I love, I don't ask their permission, but for a good car, yes. I'm still fighting it.

My father is tougher and my mother less

, so that to go out and those things I tell my mother", revealed the tennis player.

Because like any 18-year-old boy, even though he doesn't have a time to arrive home, he does have control over his parents.

"I don't have time as such, but they always tell me 'don't be late' (...) As much as I try not to make noise when I get home, they always wake up and catch me."

Who would say that he is number 9 in world tennis.

Carlos Alcaraz responds in El Hormiguero to comparisons with Nadal

And how do you manage to center an 18-year-old kid and make him number 9 in the world?

Well, that work is for and thanks to

"The team is here to tell me bad things and even if it pisses me off, it's the best for me," he said without hesitation.

came into the hands of

Anyone who has teenage children knows what it is to have a 15-year-old boy on his hands.

"At the beginning it was difficult. I was very complicated.

had it complicated. He was super messy, and I still am, although less. I did not control my emotions well. My head did not go that far,"

guided him, gave him the guidelines to become a great, to control emotions, to focus, because as

, "everything in tennis is mental."

controls that pressure by "eating the heart" of his rivals: "When I see that the other is slowing down, that he is not so focused, I realize it and try to attack him in his weakness. heart (...) My thought is 'I want to be aggressive', 'I want to go for them' and let it come out of me".

also knows that what is happening to him is only a beginning, that he has a long way to go, a lot to work on, to train, not to lose that center that

has given him for 3 years .

A center that goes through bringing everything that is happening to it to the most plausible normality, including the constant comparisons with

also manages this: "Little by little I am taking it more normal. If they compare you with him, it is that you are doing well, but it is also true that comparing you with

is throwing stones in your backpack. Stone they throw at me, stone that shot".

"Did you learn something from the match in which

Rafa beat you in Indian Wells?"

"The fighting spirit, of never giving up, of dedication and of fighting until the last ball," replied

And this is just the beginning...