China News Service, Hangzhou, April 28 (Qian Chenfei) The "4.19 Gongshu Epidemic" brought a special period to Zhejiang Cancer Hospital, located in Banshan Street, Gongshu, Hangzhou. Although it has been classified into the "three districts" management since April 20, all medical services in the hospital are operating normally. Behind everything as usual is the retrograde return of a large number 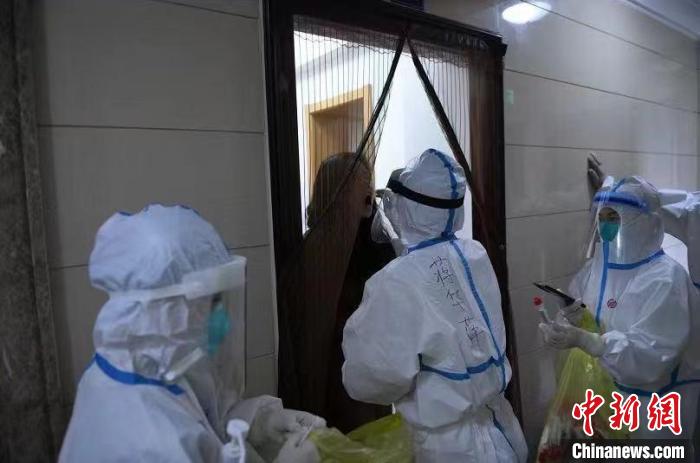 Although it has been classified into the "three districts" management since April 20, all medical services in the hospital are operating normally.

Behind everything as usual is the retrograde return of a large number of medical workers.

It is not only to ensure the work in the hospital, but on the evening of April 22, the hospital received an urgent task from the higher-level department: "The entire Gongshu District will conduct nucleic acid testing of all employees in the community as a unit, and reinforcements are needed! Please organize personnel, materials, and vehicles!" In the early morning of April 22, Gongshu District had imposed traffic control on Banshan Street, only entering but not entering.

To temporarily set up a sampling team, the difficulty can be imagined.

"This is the one with the largest number of sampling personnel sent by our hospital in a single batch, the closest to our hospital, and the most complicated epidemic situation. I hope everyone will do a good job of personal protection, be rigorous, meticulous, serious, and strictly standardized, and resolutely win the battle to defend the mid-mountain." Zhu Tao, member of the Party Committee and Vice President of Zhejiang Cancer Hospital, told the team members at the pre-trip meeting.

It's not the alarm clock that wakes you up

The dawn in the middle of the mountain is quiet.

At 4:30, the sampling personnel who stayed in the hospital got up early, washed up, and did various medical preparations.

Before the alarm went off, everyone was already awake.

Chen Xuefeng is the head nurse of the head and neck radiotherapy department of the hospital. He has participated in nucleic acid sampling support work in Shangyu, Beilun, Zhejiang and other places six times.

"It's not the alarm clock that wakes everyone up." Chen Xuefeng said that this support was different from any previous time.

"We used to travel long distances to support our brother cities, and this time the sampling point is in a place we are most familiar with. But now it is so unfamiliar with its silence and desolation. To protect the middle of the mountain is to protect ourselves."

The other 129 sampling team members outside the "three districts" gathered from all directions in Hangzhou to the mid-levels.

These days, they all gather in the early morning and set off for sampling.

At 5:30, the International Lecture Hall of Zhejiang Cancer Hospital was already brightly lit.

The catering department has already prepared breakfast for the medical team members, and the hospital infection management department did not forget to remind: "When picking a resident, hand hygiene must be in place, and don't ignore any small details."

He broke the defense with a word from the police

In the early morning not long ago, Liu Yuanshun, an endoscopist from Zhejiang Cancer Hospital, rode a battery car to the mid-mountain to gather for nucleic acid sampling.

Liu Yuanshun just returned to Hangzhou from Jinhua to fight the epidemic.

"Suddenly, before I went to Jinhua, I drove to the hospital to gather, so the car was also left at the hospital. After returning, we could only enter the middle of the mountain, and we couldn't go to the hospital, so we got off outside the 'three districts' and went back by ourselves. Family."

"At that time, I rode to a stop near the hospital, knocked on the iron railings a few times, and started shouting, 'Is there anyone? I'm going to park the battery car here and go to the hospital'." Liu Yuanshun recalled, after saying this, The policeman looked very surprised. "He asked me several times if I wanted to walk over, and after a few seconds of silence, he said he could drive me."

Because the police had to be on duty at the card point, Liu Yuanshun did not accept the other party's kindness.

But what he didn't expect was that the policeman said, "You are on a special mission, you can ride in, and when you come back, if you go from this card point, I guarantee you can pass."

His tone and words made Liu Yuanshun feel warm and moved, "He said it very firmly at the time. I was a little nervous about how to come back to pick up the car, but I felt at ease all of a sudden."

The sampling task lasted for several days, but every night, the medical team leader of Zhejiang Cancer Hospital and the logistics, nursing, hospital sense and other support team members have to meet to discuss how to better allocate materials and arrange personnel to ensure that the support work the next day can go smoothly. carry out.

At the sampling site, security personnel can always be seen shuttling back and forth between the sampling points, actively coordinating, weaving a solid and powerful protective net, and becoming a strong backing for the sampling personnel.

In the back of the anti-epidemic, there is also a procurement and supply guarantee team that is going against the light.

They see six roads, listen to all directions, make overall planning and coordination at any time, and replenish material supplies for the team members.

"You can rest assured to support us, and we have logistical support." This is the promise of the "big whites" of the hospital's procurement and supply department on the front line of the fight against the epidemic.

For this task, Zhejiang Cancer Hospital has undertaken sampling tasks in 8 communities and dozens of surrounding construction sites. The locations are very scattered, and the return time of the sampling personnel is also different.

The Ministry of Prevention and Health has specially opened a "green channel" and patiently waited for the return of the last sampling team.

Nucleic acid testing personnel in the laboratory department of the hospital have also made adequate preparations. As soon as specimens are sent, they will be tested immediately.

This spring, Zhejiang Cancer Hospital, as medical workers, went to the places where the people needed the most. They sacrificed themselves and went retrograde, day and night.