China News Service, Beijing, April 22 (Reporter Ying Ni) Zheng Xinmiao and Shan Jixiang, two former directors of the Palace Museum, are not only "comrades-in-arms" with overlapping work, but also friends who cherish each other. On the 22nd, the two shared their thoughts and insights as the "heads of the Palace Museum" and guardians of cultural heritage in Beijing under the title of "President of 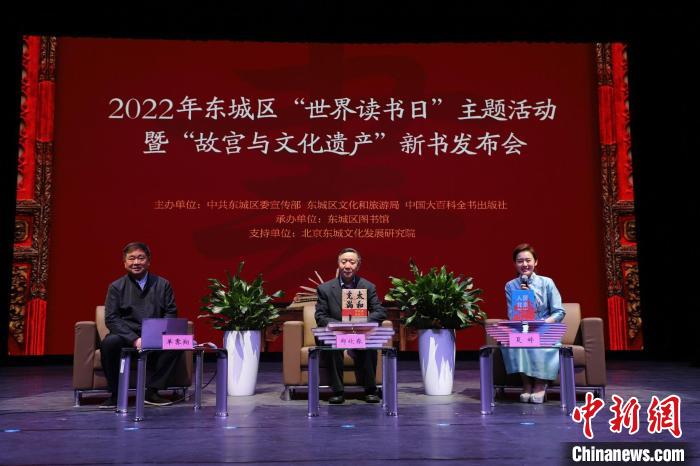 China News Service, Beijing, April 22 (Reporter Ying Ni) Zheng Xinmiao and Shan Jixiang, two former directors of the Palace Museum, are not only "comrades-in-arms" with overlapping work, but also friends who cherish each other.

The Forbidden City is a cultural symbol of China and a cultural heritage of the world.

After stepping down as the dean, he still worked in the related research work of the Palace of Accidents.

It is based on his love and understanding of the Forbidden City, as well as many personal experiences and precious historical materials, that he wrote the book "Full of Harmony - Zheng Xinmiao Talks about the Forbidden City".

Shan Jixiang on the left, Zheng Xinmiao in the middle, courtesy of China Encyclopedia Publishing House

"To hand over a magnificent Forbidden City to the next 600 years" is a solemn promise made by Shan Jixiang to the society during his tenure as president of the Forbidden City.

After stepping down as dean, he tells the Chinese story in the World Heritage through the program "Walking Alone" and a series of books.

Today, as an urban planner, a World Heritage promoter, and an old Beijinger, he brings readers a new book, Habitat for Beijing: Awakening Industrial Heritage.

Industrial heritage is a testimony to the city's history and is being integrated into the urban life of the new era.

Shan Jixiang transformed from an old factory into a Winter Olympics park through Shougang Park, and transformed the 751 industrial heritage into a cultural and creative gathering place. The combination of realistic visits and conceptual traceability tells the story of a Chinese city of the protective reuse of industrial heritage.

Shan Jixiang said that in Beijing, Shougang is an important industrial heritage and a memory of the city.

Today, Shougang has become the venue of the Winter Olympics, and has gradually become a large industrial heritage park, providing a fascinating cultural environment and a large-scale cultural facility for the citizens of Beijing and the whole country, especially for young people.

As the publisher of these two books, the person in charge of China Encyclopedia Publishing House introduced that the publishing house is publishing books from different levels and angles, showing the richness and diversity of cultural heritage and forming an encyclopedia product line.