Chinanews.com, Chengdu, April 22. Question: Thai "Rong Piao" Abang: Teaching Muay Thai in Chengdu and changing the "ring" of life   Reporter Wang Peng   Walking in the crowd in Chengdu, Abang is no different from the people around him, with the same appearance and similar dress. But when he put on shorts and vests, put on gloves, and hit the sandbag with heavy knees and legs, like firecrackers 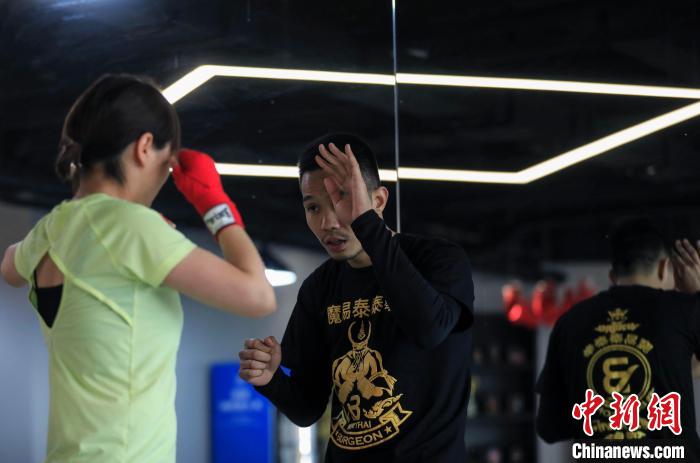 Walking in the crowd in Chengdu, Abang is no different from the people around him, with the same appearance and similar dress.

But when he put on shorts and vests, put on gloves, and hit the sandbag with heavy knees and legs, like firecrackers, you will realize that this unremarkable young man is so brave and powerful.

A 28-year-old Thai young man has been teaching Muay Thai in Chengdu for 5 years.

He grew up in rural Thailand, practiced Muay Thai since childhood and was a professional boxer.

As a child of a poor family, he had hoped to change his fate with a pair of fists, but Thailand was highly competitive and he was unlucky.

In 2018, Abang came to Chengdu by chance to compete, and the "ring" of his life has changed since then.

"Seeing that China's big cities are very prosperous, and I heard that I earn more than I do in Thailand, I want to work here." Sitting in front of a reporter from Chinanews.com, Abang was very blunt and said frankly that "I just want to make money to support my son."

With the help of his master, he successfully came to Chengdu to teach Muay Thai and became a "Rong Piao".

"Because I can't speak (Chinese), I don't understand! I'm the only one from Thailand, I don't know who to talk to!" After 5 years, Abang can speak some Chinese, but his pronunciation is vague, so he has to work hard to distinguish it. understand.

His Thai accent made every sentence seem to be emphasizing something, and his tone was fierce.

Later, with the help of the boxing gym owner and fellow Thai villagers, Abang learned Chinese little by little and gradually adapted to it.

In his spare time, he rests more at home and does not speak much about his daily life.

But when it comes to Chengdu cuisine, it is endless.

"I like hot pot, it's spicy, as spicy as Thai food!" Abang recounted in his "emphasized accent", "and eel noodles, beef noodles! I like noodles!" Scenic spots, he continued to "emphasize", "The Leshan Giant Buddha is very beautiful and fun! I am very happy, we (Thai people) all believe in Buddhism!"

Before coming to China, Abang's impression of China was almost entirely from TV. He once thought that China was very ancient and distant. "After coming here, I found that it was different at all, very prosperous!" Jackie Chan is China's Tony Jia.

In the past few years of teaching Muay Thai in Chengdu, Abang has come to know China, and he has a better understanding of the Chinese people.

"It's very friendly and enthusiastic." Abang said that some students have high social status and are very rich, "but they respect me and are very polite when they come to learn Muay Thai!"

Abang told reporters that more and more people are learning Muay Thai in Chengdu in recent years, "Muay Thai can not only strengthen the body, but also make people more brave and protect themselves!" He enjoys the transformation of the students and is also happy to bring the culture of Muay Thai to the world. China.

As Abang originally explained, he came to China "just to make money".

At present, his income in Chengdu is about three times that of his peers in Thailand.

But now he has fallen in love not only with making money, but also in love here. "If you give me a job in Thailand now with the same income as China's, I will definitely choose to stay in China!"

After the outbreak of the new crown epidemic, Abang has not been home for more than two years, relying on daily phone calls to ease his thoughts.

Abang said that after the epidemic is over, he wants to bring his parents and sons to Chengdu, "to see the Leshan Giant Buddha!"

When his son can become independent after graduating from college, he will end his work in China and return to rural Thailand, "buying a piece of land and farming."

It also means that Abang will have to stay in China for many years - his son is just 4 years old.