MasterChef 10 does not want surprises (or scares): "This is not a show"

Saying 10 years is said quickly, fulfilling them and looking back is something else. Well, MasterChef has fulfilled them. MasterChef 10 started in style, casting that view... 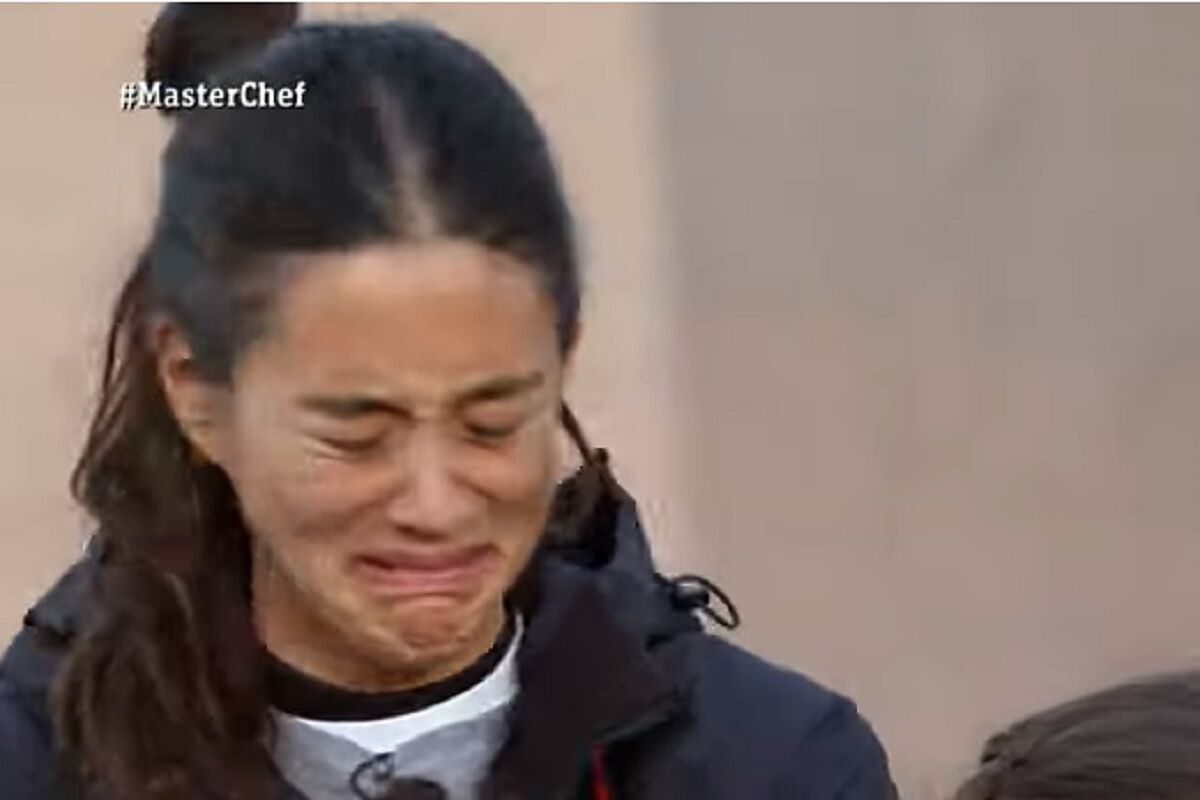 is said quickly, fulfilling them and looking back is something else.

in style, looking back and doing what he has been doing like no one else this decade: entertaining.

And this is key.

You can't sit down and watch

and think that all you're going to see is people learning to cook and cooking.

is a show, it's a show, it's pure background entertainment with a good base, a good reduced broth, a good chup-chup, which is none other than cooking.

It's not worth just with that broth.

Much more is needed.

You need to get hooked on the television and hold on until after 01:00 in the morning.

And that is only achieved by giving a game that starts from a premise, the casting.

It cannot be denied that the

There is no denying that the casting of

And you have to start with that idea.

is cooking, but it is also a show.

Can you imagine how difficult it must be to find people who cook fairly well and at the same time have something that works on television?

I don't know how

If the casting of

was already blessed glory, that of

It's like a factory of perfect candidates for a

So, to boot, two ex-girlfriends, one of whom learned to love cooking thanks to the other, who meet again at the

, who enter together to prepare the dish that the white apron has to give them to pass to

, who both manage to enter, who will share a room during the 3 months of confinement and who have even introduced themselves to their current partners so that they can meet make friends during the months that

According to Isabel Díaz Ayuso, one of the good things about Madrid is that you don't meet your ex-partners.

In Madrid, you may not find them, but you show up to

and even sleep with them.

Do they cook well?

Well, it seems so.

, in addition to starring in the reunion of the night, also have a hand with the kitchen and, on top of that, the jury likes them.

, who last night already praised and raised the work of

María Lo in the first

in the first elimination test.

For now, the show was only at the beginning.

María Lo and Teresa seem to go about their business, which is to cook, learn and advance, and the other, just for when the judges feel like throwing jokes, for when things are a bit in the doldrums.

Then there are the dramatic moments.

Those that are not missing.

, who took 9 years, three months and seven days to become one, who last night

women's pants because it makes him

First by telling the judges no and then by saying yes.

It almost disjointed our

The firefighter will give game.

I still don't know if it's for the better or for the worse, but he's going to give it.

In fact, the judges already start with the little game of pairings and forced and forced attractions.

We continue to bingo, going through

"When you're in hell, you have no choice but to get ahead."

What a lot of tears last night when the judges asked him about his recovery, about his parents, about his son's ... His and Pepe Rodríguez's, who recalled his years as a volunteer in an association against drug addiction.

, the first eliminated from

, the contestant who last night was about to end his grandmother's life by stamping her against a wall, and the applicant who already messed it up in the casting of

, winner of the previous edition, and that almost gave him a telele when they gave him the white apron.

Then there is the geek sector, and I say this with all due respect, because geeks are the sauce of

is a contestant's dream.

Eurovision fan, Belgian based in Murcia, singer in a spa and lover of Harry Potter.

, a lover of all things Asian, especially Koreans, a vampire and Ofelia's twin sister.

Rodríguez drew a more than reasonable resemblance to the

from the last edition.

Or Adrián, the Basque who sings flamenco, and who asked his girlfriend's hand last night when they gave him the white apron.

She entered, told her multiple aesthetic operations and the story of her "infiltrated ass", and disappeared like the Guadiana.

"She has not been able to be," said the judges of

, and even more to see, which I suppose will be for the next program.

And then there are those who do not fit into one bag or the other.

And there is the secret son -note the irony- of

It's that if you hurry me they look even physically.

And how the kid works.

The handling that was given with the pots in the outdoor test, his hand in hand with

with the chicken and all the broth, and the desire that he puts into each step he takes in the kitchen, are more than enough for

highlighted his work above that of the rest of his colleagues.

For the public that wants cooks, real cooks, here is

was introduced to the previous edition of

They did not take her because they considered that she was not prepared or focused.

He focused, formed, prepared and re-introduced himself.

And now yes, yes, and with nothing to object to, for the moment.

She has the judges spellbound and delighted.

There are even those who say that she has all the ballots to proclaim herself the winner.

, there 's sooooooo much

The balance more than balanced, right?

Applicants who give game, who cook, who give a show, but also with a certain amount of restraint.

It gave me the feeling that the casting has been much more restrained than in past editions, much more focused, much more measured and calculated.

wants a show, but he doesn't want it to get out of hand.

He shows in some applicants who hit the brakes before the accelerator.

Yes, you have to put on a show, but you have to control that it doesn't explode in your face.

-10 editions go a long way- already in the first program many showed their legs.

Last night, everything was in order, everyone was firm and here, not even God went out of line.

It was only necessary to see the judges after the first outdoor test.

First, their evaluations are much more contained than in other editions of

And, second, there only had to be where they have begun to mark the limits.

The first kidnapping was guaranteed with the disaster of the red team and the captaincy of Iván.

have to put on his jacket, but of the 240 menus they had to prepare for

, 13 were left without cod and 90 without a donut from Alcalá.

If you add to that that

But it was a soft fight, very soft.

A constructive quarrel, without delving into the yaga, without opening the wound.

That it be clear what his mistakes were, that he recognize them, that he endure the pull and point the ball.

No firewood was made from the fallen tree.

And on the other hand, the work of those who left their horns in the kitchens, such as

"Not all of you are guilty, in fact, some of you are more so than others. That a program 1 people fails with 240 menus in front of it seems logical to me, because it is the first day and you are not professionals. What I cannot understand is not seeing attitude", snapped

to the red team and, especially, to

But there was no more.

It was clear that they were the ones who were going to go to the elimination test and that was enough and more than enough.

Now, the anger against the blue team, more than an anger over his work, was an anger over the person who warns that he is not a traitor.

The blue team worked, to be a first outdoor test of the first

I very much agree with the assessment made by your captain,

, highlighting the great work they had done, and the work done by the members of their team.

And before that happens, they put the brakes on.

First, they reproached them for not knowing the cooking times of the ingredients and for not having cooked the chicken and vegetables in a normal pot and the meat in a pressure cooker.

What a serious mistake!

Come on... And then Jordi Cruz

for having seen them dance during a cooking moment.

"This is not a 'show', but the reflection of the professional kitchen

and you have to come with another attitude, are we?" Really? Or that they had represented Flash Dance in the kitchen. It was a moment to relax and lower tensions like many other moments that have been seen in the history of

say that phrase to them, that even they were left out of place? Well, there could be two reasons. One, that some defect had to be removed , yes or yes, like the cooking time. Or two, and the one who sings the most, that in this edition of

the show is going to be controlled by

and no one else. There will be show and show when

And no one, absolutely no one, is going to get out of hand.

That containment was present throughout the first program.

It is true that they decided to expel

for his poorly prepared blood brownie, but Iván could have left perfectly.

However, they chose the one who was most likely to get out of control and put

in the odd spot .

And even being very clear with him, still assuring that he had given it to him to spare,

endured the pull and left without saying a word louder than the other.

Maybe this is what the viewers had been claiming

for a long time or the same is that

the bandage has been put on before the wound.