Blind tactical games are sought after by visually impaired young people: use sound to build game rivers and lakes

A tactical game for the blind is sought after by the visually impaired young people. The game can be controlled by swiping gestures   . The sound is used to build a game for the visually impaired.   Chief programmer Keke at work for photo/respondent   As game themes become more and more diverse, games with similar realism themes have also emerged in the game market in recent years. A game sett 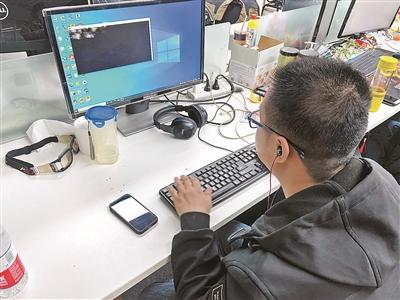 A tactical game for the blind is sought after by the visually impaired young people. The game can be controlled by swiping gestures

. The sound is used to build a game for the visually impaired.

As game themes become more and more diverse, games with similar realism themes have also emerged in the game market in recent years.

A game setting similar to the old Monopoly, players can engage in real-life work such as "moving bricks and washing cars" in the game, connecting realist games with serious social issues, breaking the stereotype of "killing monsters and upgrading" in the past. The game mechanism has attracted the participation of many young groups.

In addition, in addition to the theme of the game, there are also production groups that have changed the game form, such as a tactical game for the blind. Through special research and development of sound effects, visually impaired groups can also easily experience the "chicken-eating" battlefield.

When it comes to tactical competitive games, many young people are not unfamiliar with them. There are various games such as "Peace Elite" and "Jedi Survival" on the market. Everyone loves to call them "eat chicken".

And how can visually impaired young people participate in the game world so that they can also feel the joy of such games?

Put on your earphones "chicken tonight"

"Battlefield of Glory" was jointly developed by Keke, the main programmer of the post-90s blind game, and his teammates in one year.

Entering the game, the war sound that surrounds the ear makes people immediately immersed in the tense atmosphere. Swipe the screen to move forward in different directions; in the room, the footsteps are crisp and clear. The frequency is also slightly clumsy.

When turning left or right, there will be faster footsteps to indicate the direction.

As you approach your companions, you will hear their heavy gasps.

The continuous alarm sound of Didi reminds the player that the enemy has entered the field of view, and the voice will broadcast its health status. Swipe the right screen to select a weapon, and you can attack it.

"When encountering a wall, equipment or a new space, the system will also give a voice prompt to help players find out the location of the map in the dark. During the process of the game, a more urgent alarm will sound from time to time, indicating that the tsunami is coming, all players You need to immediately return to the 'abandoned laboratory' to avoid." Keke said, relying on the sound, I built a "chicken-eating" battlefield for visually impaired groups.

The development of games for the blind, according to the words of Tang Seng, CEO of Mind Interaction, is that "there will be no way to finish the game, and there will always be chasing soldiers behind."

Before the development of the Mind Interaction team, there was almost no game on the market that specifically served the visually impaired group. It was even more difficult to cross the river by feeling the stones when it was upgraded to the "Battlefield of Glory" with pure audio real-time combat.

Tang Seng said: "Compared to "Tingyou Jianghu", the development of "Glory Battlefield" is 'many advanced'. "Tingyou Jianghu" is a 'downward compatible' game with a main storyline. The battle has voice command, and everyone can play it. However, "Battlefield of Glory" is an e-sports product, and the technical and practical aspects must be kept up. Fighting and shooting are all operated by the players themselves. Except for the lack of pictures, "there is no difference from the tactical competitive games we play", and visually impaired youth can also Chicken tonight!"

Building a world that visually impaired people can understand

When he was a little boy, Keke had already been exposed to some games for the blind through the computer. The games at that time were very simple. "The audio is only a racing car, which is quite advanced. The other games are stand-alone games. Playing by yourself is completely different from playing when you can see it.”

Keke pointed out that making games to adapt to visually impaired groups relies on "empathy", although visually impaired players have different feelings about space, "but we will have a common point, try to get close to this point, that is The scene we built".

Keke talked about the development of gun sounds, "Everyone's understanding of guns may be different, but we have feelings for gun sounds."

"After we have an understanding of the sound of gunshots, we will have a general construction of the gun in our minds. Although we don't know what it looks like, we know that it must be heavy and it will be more stressful. What do we need when firing a gun? the power of".

In a visually disabled world, Keke's keen hearing enables Keke to receive more information than ordinary people, and to empathize with the world heard by visually impaired people, Keke said, "For example, I can hear the movement of monsters in the field. The sound is not smooth, and it shouldn’t jump from left to right at once; for example, if I hear something strange walking and suddenly disappearing, I will put it up and see if it can be optimized.”

All of these require developers to have a very strong spatial imagination. Although the game world is invisible, Keke will also imagine the layout of each piece of land in the map, the orientation of the room, the slope of the hillside, the strange location, and gradually through the code Build, "Because I am totally blind, I will feel that the map is black and white at first, and there is nothing. When you make a map, you will see that the map has been colored."

This is also how Koko reimagines color after he lost his sight.

System needs to be debugged every week

In order to ensure the game experience, Keke needs to debug the system almost every week.

In an office building in Beijing's Daxing District, he was sitting at his workstation wearing square glasses, tapping on the computer keyboard rapidly. His code writing speed was not far behind other programmers. The code will be read to him at a speed of 700 words per minute, while the speed acceptable to ordinary people is generally 200-300 words per minute.

The most difficult part of developing "Battlefield of Glory" is to make the sound effects realistic to "build the scene". 10 real players are on the same battlefield, shooting and walking. A goes left and B goes right. Each player can feel, to give a comprehensive feeling.

The construction of a large number of sounds requires repeated trial and error. It takes about 3 months to write the code of a battlefield, and it needs to be modified continuously according to player feedback in the follow-up. Keke introduced that the human ear has a spatial structure, and what it hears is three-dimensional. "It would be great if everyone played games with speakers, but in games we generally wear headphones, and our ears lose the 3D feeling. We need to use various ways to present them to restore the correct effect or enhance some sounds."

Keke mentioned that the number of people to play a game was also determined through trial and error, "At first, for fun, we thought about whether we could play with 30 people, but later found that 30 people had too many voices and too much information. , can't handle it", and finally set the game scale of 10 players in each round.

The game has been debugged and maintained every week from development to launch.

In the future, Keke hopes to make audio with higher sound quality and make more efforts in program stability.