China News Service, Guangzhou, April 11 (Reporter Cai Minjie) Guangzhou's epidemic prevention and control is at a critical period. The reporter visited some meat and vegetable markets and supermarkets in Guangzhou on the 10th and found that the prices of meat, eggs, fish, grain and oil are stable, and vegetables Prices rose slightly. The government departments of many districts in Guangzhou anno 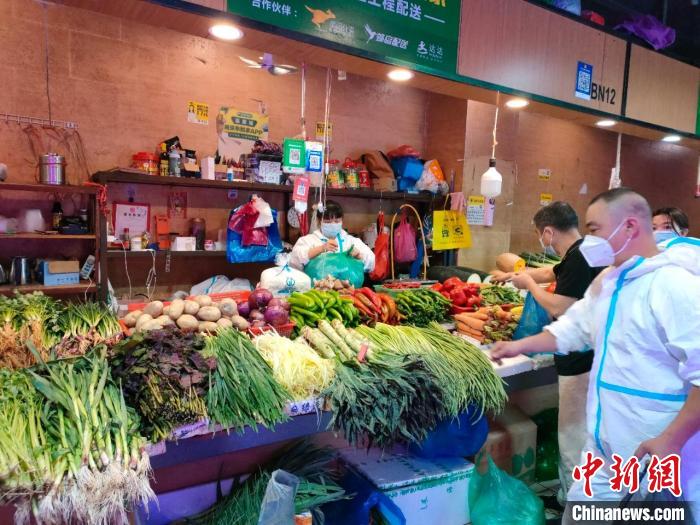 China News Service, Guangzhou, April 11 (Reporter Cai Minjie) Guangzhou's epidemic prevention and control is at a critical period. The reporter visited some meat and vegetable markets and supermarkets in Guangzhou on the 10th and found that the prices of meat, eggs, fish, grain and oil are stable, and vegetables Prices rose slightly.

The government departments of many districts in Guangzhou announced that they will protect and enrich citizens' "shopping carts" and call on citizens to shop rationally.

Since the 9th, Guangzhou has carried out nucleic acid testing for all employees, and some areas have been designated as closed control areas, control areas and prevention areas. Many citizens went to local vegetable markets and supermarkets to buy a large amount of daily necessities. Some supermarkets were sold out, but the merchants added later. goods.

"On the morning of the first day of becoming a control area (9th), there were more people buying supplies, but today's passenger flow has decreased, and everyone tends to shop rationally." said Mr. Huang, who lives in the control area of ​​Baiyun District, Guangzhou.

In order to open up the sealing and control and control the distribution of civilian materials in the area, several departments in Baiyun District have integrated resources such as e-commerce procurement platforms and major supermarkets to divide regional grids, and provide goods supply at any time according to actual needs.

Among them, Lingnan Business Travel Group provides daily necessities guarantee services at the Guangbaixin City Supply Guarantee Point in Xinshi Street (Community), Baiyun District. During the period of guarantee supply, 10 support personnel are arranged to deliver goods for a total of 3 trips.

Since the outbreak of the current round of the epidemic in Guangzhou, the living materials security team of Yuexiu District, Guangzhou has launched an emergency response mechanism, and the main meat and vegetable markets, large supermarkets, and chain convenience stores in the district are operating normally.

A total of 12 temporary sales points have been added to the control area of ​​the three streets of Mineral Street, Liuhua Street and Dengfeng Street, and they can be adjusted flexibly at any time according to the needs of the public.

There is a supply point in Tongxin Community, Dengfeng Street, Yuexiu District. Community residents line up in an orderly line to buy instant noodles, dried noodles, ham sausage, cooking oil and other materials.

At Yaotai New Market on Mineral Spring Street, vegetables and meat are plentiful.

As of 12:00 on April 10, about 30 to 35 pigs, about 4,500 kilograms, and about 25 to 30 tons of vegetables are listed in the supermarkets and farmers' markets involved in the Mineral Spring Street control area every day.

The Dengfeng Street control area has delivered more than 1,000 orders to residents.

About 8.21 tons of daily necessities are distributed and supplied to residents in the Liuhua Street control area.

At present, the farmers' market, large supermarkets, and chain convenience stores in Yuexiu District are fully stocked, and the supply of livelihood commodities of online and offline enterprises has been guaranteed at 3 to 5 times the usual purchase volume, and the frequency of replenishment has been increased. Necessities are in sufficient supply.

"In the beginning, I saw that everyone was stocking up and worried that they would be out of stock. But when I came to the market, I saw a lot of meat and vegetables, and the price of vegetables was not very expensive, which was about the same as usual." Chen, a citizen who lives in Panyu District, Guangzhou City The husband said that he usually buys vegetables on the e-commerce platform, but the platform has insufficient capacity in the past two days, so he went directly to the market to buy.

At 16:00 that day, the reporter saw a dazzling array of fresh vegetables such as cabbage, kale, cabbage, and lettuce in the Dongcheng Market in Panyu District; in the fresh section of Jiuhong Supermarket, there were more pork and beef in the freezer. Prices are relatively stable, ranging from 12 to 16 yuan per 500 grams of lean meat.

Wang Chengping, assistant manager of Jiuhong Supermarket, introduced to reporters that the general buying peak occurs around 9:30 and 17:30. After the first wave of vegetables and meat is sold out, the supply will continue to be increased according to the situation.

The Panyu District Market Supervision Bureau stated that at present, the overall price order in the Panyu District market is in good order, and no price violations such as fabrication, dissemination of price increase information, and price gouging have been found.

In the new city market of Jiekou Street, Conghua District, Guangzhou, there is an endless stream of purchasers.

"I can buy all the vegetables and meat I need, and I feel that the price of meat and vegetables is basically the same as the previous days, and there is no obvious fluctuation." Miss Cai, a resident of Guangzhou, said that seeing the sufficient supply of grain, oil, fruit and vegetables in the market made her feel Peace of mind, no need to snap up.

According to the estimates of the Agriculture and Rural Affairs Bureau of Conghua District, the district will supply about 630 tons of vegetables, about 130 tons of fruits, about 410 live pigs, about 20,000 poultry, about 85 tons of eggs, about 23 tons of aquatic products, and about 23 tons of dairy products every day. 50 tons.

The living materials security team of the new coronavirus pneumonia epidemic prevention and control headquarters office in Huadu District, Guangzhou announced that the daily reserves of important daily necessities such as rice, flour, edible oil, meat, vegetables, eggs and milk are more than 860 tons. The supply of goods is sufficient, the price is stable, and the supply, marketing and transportation channels are smooth.

In terms of online channels, online e-commerce platforms such as Meituan Select and Dingdong Maicai can place orders normally, and the platform has arranged sufficient drivers and riders for emergency delivery of goods.

Among them, Meituan Maicai said that the number of orders in the epidemic-controlled areas has increased significantly compared with before, and the demand for orders has increased by more than 200%.