[Capture] Boom and Sleepy became new grooms side by side on the same day... gorgeous wedding scene

Broadcaster Boom and singer Sleepy got married on the same day in the celebration of many people. On the 9th, Boom and Sleepy each got married to their non-celebrity girlfriend and became the groom of April. 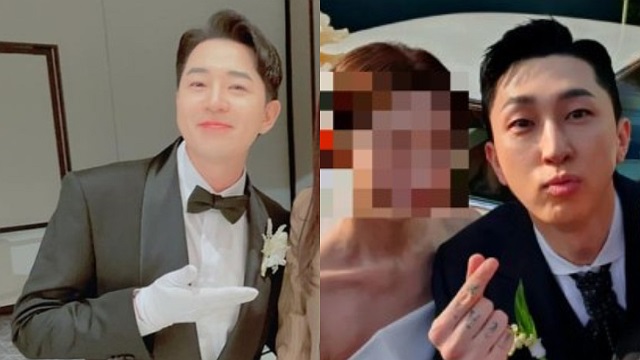 Broadcaster Boom and singer Sleepy got married on the same day in the celebration of many people.

On the 9th, Boom and Sleepy each got married to their non-celebrity girlfriend and became the groom of April.

In addition, both of them caught the attention of many people by holding a wedding filled with splendid congratulatory songs, society, and guests.

First, Boom welcomed a non-celebrity girlfriend 7 years younger than her as her bride.

The congratulatory song on this day was performed by singers Young-woong Lim, Chan-won Lee, and K.will, who had a relationship with 'Mr. Trot', and was hosted by actor Lee Dong-wook.

The godfather of the comedian world, Kyung-gyu Lee, officiated and blessed the new beginning of Boom.

In particular, Boom enjoyed the joy as he walked along the Virgin Road with his characteristic splendid appearance.

On the same day, Sleepy also married a non-celebrity who is 8 years younger than her.

Sleepy, who had planned her wedding in October last year, was delayed due to the spread of COVID-19, but she finally got married on the 9th.

Comedian Kim Gura gave thanks and rapper DinDin delivered congratulatory remarks to support the two of them in their future.

The excitement of the wedding, which was hot at the time, was directly communicated through SNS by Sleepy and DinDin, who is known as a best friend.

DinDin posted the hashtag # AfterPerformance Team 5 on his SNS, but the new groom Sleepy directly commented, 'Congratulations Team 9...', announcing her wedding filled with joy and enthusiasm.

Also, comedian Lee Guk-ju, who appeared as a virtual couple in a past variety show, released a two-shot on SNS along with the caption, "Sleepy Marriage Day. It was successful. The wedding hall is so pretty. Good oppa. I hope that marriage will be filled with even better things." It became a hot topic.

Meanwhile, as Boom and Sleepy had their wedding ceremony on the same day, there were also concerns about overlapping guests.

Before the wedding, Sleepy appeared on MBC's entertainment show 'Radio Star' and expressed mixed thoughts, saying, "I'm worried that all the people in the broadcasting industry will go there. I had two dreams of not coming to the wedding."

However, as Boom held the ceremony in the morning of the 9th and Sleepy in the late afternoon, the worries did not happen.

Netizens who heard the news of Boom and Sleepy, who became new grooms side by side on the same day, responded warmly, such as "Some guests seem to have finished their meals for the day at the wedding", "I was also worried about overlapping guests. was seen.